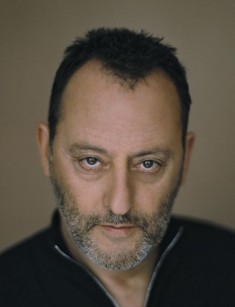 Jean Reno is the famous French actor with Spanish roots. Reno became popular after the drama “Leon: The Professional” where he played a solo assassin came out. The actor’s other projects attracted public attention as well. His comedy movie career has been developing actively: Jean Reno became famous for the funny movie “The Visitors.” Reno has starred in 70 movies, some of which are: “Wasabi,” “Ruby & Quentin,” “The Da Vinci Code,” “Ronin,” and “Godzilla.”

Jean Reno also known as Juan Moreno was born in the Moroccan city Casablanca. His parents came from Spain: they had to leave their homeland because the military dictator Francisco Franco became the country’s leader.

The family lived in Africa until the boy turned 12 and came back to Europe to settle in France which was more or less liberal. However, it was difficult for foreigners to get the citizenship. The parents had to choose working professions: the mother became a tailor, and the father got hired in a printing house.

When Jean was 17, his mother died suddenly. The young man needed a French passport in order to find his own place in the country; thus, he joined the national guard. Reno served for four years and became a legal French citizen. As long as he finished the military service, he decided to get himself into theater or movie acting which had been attracting him since his childhood.

In 1970, Reno took up acting classes in the famous Cours Simon School of Drama. At this period, he made up a pseudonym: he changed his name “Juan” to the French version “Jean” and got rid of the first two letters in his second name. As the young man was studying, he tried to earn his living by all means: he used to be a driver, accountant, and even a customs officer.

Several years later, the beginning actor had a lot of theoretical knowledge and debuted on the local TV in the series “Jo” and at the theater in the philosophical performance “Ecce Homo” based on Friedrich Nietzsche’s works. In 1978, the movie “The Hypothesis of the Stolen Painting” became Reno’s first full-length project.

Although Reno’s theater career was quite good, things were not doing great in movies. The world would not have seen Jean Reno as a wonderful actor if he had not met the young movie director Luc Besson. In 1981, the short-length movie “L'avant dernier” came out; two years later, “Le Dernier Combat” was released. These movies were somehow famous among the public, yet it was the next movie “Subway” that appeared on the screen in 1985 and made the whole France speak about Jean Reno regardless of his secondary role.

Many new projects by other directors followed, for instance, “Le téléphone sonne toujours deux fois,” “Strictement personnel,” “I Love You,” and “Zone rouge.” Later, Jean Reno collaborated with Besson again and played the diver Enzo Molinari in the movie “The Big Blue.” This work brought the actor the first César Award nomination.

In 1990, Reno played the secondary role of an assassin in the crime thriller “Nikita” – for the first time in his career, he presented a lonely assassin image that was going to become his trademark for many further years. As his favorite movie director Luc Besson saw the “Nikita” episode with Reno, he created the scenario for him personally for the new project. In 1994, the psychological thriller “Leon: The Professional” came out and brought the director and the actors the fantastic success.

Jean Reno was trying to change his one-and-the-same-character image and took part in different movies, such as the historic comedy “The Visitors,” the romantic comedy “French Kiss,” the modern western movie “Le Jaguar,” the surreal melodrama “Beyond the Clouds,” the energetic comedy “Roseanna's Grave,” and other projects. Some of them proved to be popular, yet the lonely antihero image let the actor enter the American and Hollywood cinematography.

The blockbuster “Mission: Impossible” starring Tom Cruise was Reno’s first foreign movie. The director Brian De Palma believed that the actor would be able to make the impression on the audience without uttering a single word and offered the actor the role. The next fantasy movie “Godzilla” was even more successful: at that time Jean had the chance to personify “a good guy,” and the actor played the person who was rescuing the world from a monster brilliantly.

Jean Reno and Robert De Niro’s duo in the action movie “Ronin” was wonderful: this project is considered Reno’s best work in the last century. The new millennium brought the new success. The psychological thriller “The Crimson Rivers” based on the famous novel by Jean-Christophe Grangé came out and gained so much popularity that script writers immediately started creating the sequel; the movie “Crimson Rivers II: Angels of the Apocalypse” was released four years later.

In 2001, the American adaptation of “The Visitors” was presented. The movie is considered the remake of the original, but Jean Reno and Christian Clavier played the roles of the count and his servant in medieval France, just like in the original movie. The characters’ names changed, though: count Montmirail turned into de Malféte and his servant Jacquouille became André. The movie is set in the modern USA.

In this year, another globally famous movie starring Reno came out: the actor played the French commissaire Hubert Fiorentini in the comedy action movie “Wasabi.” The eccentric policeman learns that he has a daughter who is almost of legal age; she is half-Japanese. The newbie father tries to protect the girl from the yakuza hunting her.

In 2014, the new adventure tragicomedy “Hector and the Search for Happiness” with Jean Reno appeared; the actor had a secondary role there.

Jean Reno married for the first time when he was not famous yet; his first wife’s name remains unknown. The actor had two children in that marriage: the daughter Sandra and the son Michael. The divorce was caused by Reno’s behavior: he had a love affair with the Polish photo model Nathalie Dyszkiewicz who became his second wife. In the second marriage, the actor’s son Tom and the daughter Serena were born. The couple split up in 2001.

Five years later, Jean Reno married for the third time: it was the Romanian photo model and actress Zofia Borucka. The French Minister of the Interior Nicolas Sarkozy was the groom’s best man.

The actor is fond of soccer and supports Inter Milan. Besides, Jean Reno is the fans of rock&roll king’s Elvis Presley’s works.

In 2016, after the 17-year break, Jean Reno played Godefroy de Montmirai in the fantasy comedy “The Visitors: Bastille Day.” In the new sequel, the count and his servant go to 1789 when the Revolution was breaking out.

In January 2017, the premiere of the movie “Family Heist” starring Reno took place. The actor played the thief Patrick who acted internationally and invented a robbery plan involving his daughters who had never seen their father. The thief decided to combine the business and the attempts to restore his relations with the forgotten children.

Today, the actor may be seen in the image of Leon on the website “Grand.” The advertising campaign uses photos and videos of other iconic actors as well, for instance, those of Al Pacino and George Clooney, along with their popular quotes. 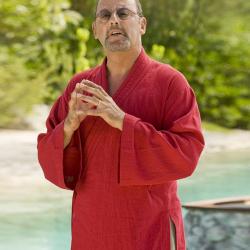