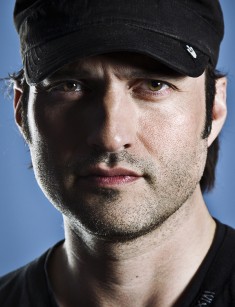 Robert Rodriguez is a scandalous director and the author of cult movies which are known to each fan of cinematography. He is known for his movies "Roadracers", "From Dusk till Dawn", "Machete", "Spy Kids" and other remarkable works.

The great director was born on the 20th of June 20, 1968, in the sunny state of Texas in the south of America. It is known that Rodriguez grew into a large family, there were 9 more children in his family: 5 girls and 4 boys.

Robert's parents (Mexicans by origin) are ordinary people: his mother Rebecca worked at the hospital, and his father Cecilio sold porcelain and crystal in the local china shop.

Though Robert's parents were ordinary workers and weren’t involved in the art they tried to support creativities of their son which began to appear at the earliest age. Every weekend Rebecca took her children to the movie theater which was situated in the suburbs of the city. It is remarkable, that the woman wasn't democratic in "cultural education" and made the list of movies which, according to her opinion, were suitable for children.

However, it’s difficult to understand what influenced the choice of Señora Rodriguez, as in the family archives there were collected various musicals, absurd comedies by the Marx Brothers (whose humour was based on the throwing of cakes, fights and slaps in the face) and also some movies directed by Alfred Hitchcock, the master of thrillers and suspense.

When the boy was 10, against the advice of his mother, he watched the space opera "Star Wars", and in 12 he saw the picture "Escape from New York" directed by John Carpenter (1981) with Kurt Russell in the leading role. This movie was telling about the adventures of Manhattan "Rambo" - Plissken admired the young man so much that he had seriously thought of the director's future career.

During the school lessons Robert drew superheroic comics on the fields of his notebook, therefore, it's not amazing that the future director had a reputation of the C student and a lazy boy among the teachers.

When the family of Rodriquez got a simple Super8 camera, this device became the favorite toy of Robert. Besides the improvised short-length movies, the young man shot school soccer competitions.

If most of the directors spend excessive amounts of money as millions of dollars to create their movies, then Robert Rodriguez is called the master who is able to work without a budget. The abundance of expensive special effects is not the major thing for the director, instead of this - professionalism, scrupulous planning of the plot and a vivid picture – are things that really mean a lot.

It’s not surprising that the movies of Robert have so-called "Mexican color and spice", the majority of his eccentric pictures are full of "ethnic color", hot-blooded fights and quarrels and serious gunfires.

The film "El Mariachi" which was shot in 1993 became the first work of Rodriguez in the movie industry. To get money for the debut picture, Robert was involved in an adventure and had undertaken the role of "the laboratory rat": he took experimental medicine which lowered cholesterol level in the blood. For this dangerous experiment, the director earned $3000, the other part of $4000 was contributed to the movie shootings by Peter Marquardt who performed the role of Moco.

In total, Robert needed the sum of $7000 what is considered insignificant for the movie industry.

But it is worth remembering that the DVD-version of the movie "El Mariachi" cost one million dollars, this money was spent on promotion, advertising, and post-production. In this debut work, Robert appeared on the movie set not only as a director but also was a scriptwriter, operator and the person who was responsible for special effects.

In 1995 Rodriguez shot a particular remake of the movie "El Mariachi" – the picture "Desperado" after which the actors Antonio Banderas and Salma Hayek became famous among the American audience.

In 1996 Robert became the director of the cult movie "From Dusk till Dawn" which brought Rodriguez world popularity. The script of the picture was written by Quentin Tarantino on the base of the plot by Robert Kurtzman. George Clooney, Danny Trejo, Harvey Keitel, Cheech Marin and other famous actors also took part in this movie which narrated about the struggle of the Mexican bandits with blood-thirsty vampires.

It is worth noticing that Robert and Quentin are friends and they have cooperated together more than once. They worked on the movie "Grindhouse" (2007) and also participated in the shootings of the comedy "Four Rooms" (1995) which tells about the unusual and ridiculous working day of the porter Ted (Tim Roth).

The picture "Grindhouse" with Rose McGowan in the leading role is the pioneer in the "trash" genre. In the movie marked "18+," there is everything that surely will please the fans of black humor and blood scenes.

The movie "Sin City" (2005) is one more significant work in the creative career of Rodriguez. It is known that Robert has always enjoyed reading and drawing comics. But most of all he liked the American writer Frank Miller, the author of graphic short stories "Sins City". Therefore it’s not unexpected that the Mexican decided to film a screen-adaptation of this noir criminal plot.

By the way, Frank Miller considered that all Hollywood attempts to make a screen-adaptation of this comic book were destined to be a failure. But Robert was shooting small videos in secret from the writer and showed it to him later. Miller was so impressed with Rodriguez's idea that he at once agreed to take part in his project. Robert decided that the author of "Sin City" would become both the scriptwriter and director of the movie.

Besides the intriguing detective plot, this movie attracted film fans with its unusual image (the same as in the original comics): the picture is black-and-white, but significant parts of the characters or scenery are highlighted with the color. Bruce Willis, Mickey Rourke, Jessica Alba and other actors acted in "Sin and the City".

It’s noteworthy that Robert is famous not only by his action movie with bloody slaughters and passionate quarrels. Rodriguez also perfectly directs children and teenage movies. He shot all parts of the "Spy Kids and also "The Adventures of Sharkboy and Lavagirl".

Robert was married to the actress Elizabeth Avellan who participated in a number of his movies. They have five children: four sons - Rocket, Racer, Rebel, Rogue and a daughter Rhiannon.

Besides cinematography Robert is fond of music. He founded the "Chingon" band, which plays Mexican rock. Robert likes to share his professionalism with the aspiring directors, therefore, he released the book "Rebel without a Crew: Or How a 23-Year-Old Filmmaker With $7,000 Became a Hollywood Player".

It is known that the director is a regular user of the Instagram social network. On his official page the Mexican director posts photos from the movie shootings.

In 2018 there will be a premiere of the movie "Alita: Battle Angel" with Michelle Rodriguez in the leading role.