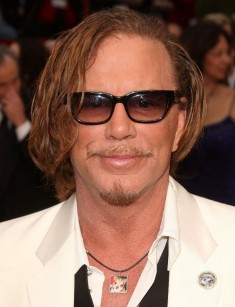 Mickey Rourke is an American actor and screenwriter, a former professional boxer. He became famous after starring in Hollywood films.

Mickey Rourke (real name - Philip Andre "Mickey" Rourke Jr.) is a Hollywood actor, boxer, and an outstanding person. He was born on September 16, 1952, in Schenectady. The father of the future celebrity, who was a baseball fan, often called the son in honor of the famous player Mickey Mantle.

Rourke's childhood was not very happy. When the boy was 6 years old, parents decided to divorce. His mother, taking children with her, moved to Liberty City, Miami district, where most of the population was African-Americans. Soon after the move, Philip's mother married a retired policeman Eugene Addis. By that time, Philip, being a teenager, did not accept his stepfather with his rules.

Rourke spent a lot of time on the streets of the city. His friends were pimps and drug dealers. Life in such an environment led the young man to the boxing ring.

Philip did not like to study but he was interested in baseball. Also, he attended the acting class of the famous in South Florida teacher Jay Jensen. When Rourke graduated from the school in 1971, he had good mark only in physical education.

Once, Mickey’s friend, who staged Jean Genet’s play "Haute Surveillance" at the university, invited the future Hollywood star to take part in the play. Then the actor decided to play this role but didn’t decide to devote himself to this profession.

Mickey Rourke started his career with physically hard work. Then he spent several years in a criminal environment, selling drugs. He even nearly died during the shooting. Since then, the man decided to leave criminal life, and, taking several hundred dollars, moved to New York. He entered The Lee Strasberg Theatre and Film Institute. Rourke had to work in order to pay for his studies.

Since 1978, when the actor moved to Los Angeles, there were endless castings. But they did not bring results. For the first time, Rourke starred in "1941" by the famous Steven Spielberg. Then there were few more episodic roles. In 1983, the best film in the creative biography of the actor «Rumble Fish» by Francis Ford Coppola was released.

The actor became famous and was invited to star in films of different genres.

Coppola told: "Mickey Rourke is an outstanding actor. He has a certain magnetism, a mystery ... "

Three years later, the legendary "9½ Weeks" was released, after which Mickey go the title of the world star. From this moment Rourke began to choose only those films and roles that corresponded to his ideas. So, Rourke played in the films "A Prayer for the Dying", "Our Guy", "Wild Orchid", "Francesca”. He also appeared in one of his best roles in the film "Angel Heart". At the same time, the actor refused to participate in the film "Rain Man", since by the end of the 90's he had not worked for a fee less than $ 1 million. The film received four Oscars. Later Rourke felt sorry, explaining his decision to the lack of childhood and because he wasted a lot of money.

The film "Bullet" is the last film that refers to the period when Rourke was at the peak of his career. In future, the actor played in little-known action movies (“Out in Fifty”, “Thursday”) and from the beginning of the 2000s, he was shot in episodes. The films "Once Upon a Time in Mexico" by Robert Rodriguez and "Sin City" were not so successful.

Only in 2008, in the film by Aronofsky "The Wrestler" Rourke got a chance to show his talent. The actor spent 3 months at the school of wrestlers, training hard. The film became successful. The actor received the Golden Globe and also was nominated for Oscar.

In 2010, Mickey Rourke appeared in such popular films as "Iron Man 2", "The Expendables" and "Thirteen". Today, Rourke still hopes to play better roles.

In 2009, Mickey Rourke visited the program "ProjectorPershilton." Along with Russian TV hosts, the American film actor discussed the news of the week, youth employment programs, as well as political events.

Mickey Rourke started boxing at the age of 12. Soon the athlete appeared at a professional ring.

Between 1991 and 1994, Rourke had 8 fights. He won 6 of them. Mickey was considered an excellent fighter. The athlete once even appeared on the cover of the World Boxing Magazine. But for his achievements, the man paid several concussions of the brain. More than once he broke his nose, cheekbone, arm. Because of a large number of injuries, Rourke suffered a plastic surgery that distorted his face. Photos of the actor before and after the operation shock his fans today.

Mickey had to leave the ring, but now he admits that he loves boxing. The man is in good physical shape (Mickey's height is 180 cm) and is ready for fights.

In November 2014, Rourke returned to the professional ring. The boxer knocked out of the American Elliot Seymour. The battle took place in Moscow.

In 1981, Mickey had relations with the beginning actress Debra Feuer. He married her without thinking. According to the actor, they were both too young, so they broke up in 1989.

On the set of "Wild Orchid" in 1990, Mickey met Carré Otis. Soon Mickey and Carré had a wedding. But the marriage was not happy: the couple often quarreled, and Mickey even beat his wife. The man always returned her after quarrels but the couple broke up in 1998.

Mickey Rourke has no children.

In 2016, the press reported that in 2017, Mickey Rourke could have the last fight in his career, which is planned to be organized in the Urals. Representatives of the athlete confirmed these reports, saying that negotiations with the Urals partners are already in progress.

Once, Rourke danced in a boxing ring for the popular song of the 90th by the Russian singer Yevgeniy Osin. The video was published by the American on the Instagram. Rourke made funny movements, somehow resembling a jive and a twist with elements of boxing for Osin's song "I do not believe." The actor danced in the ring dressed in short shorts.

In 2016, Mickey once again shocked the fans with his appearance. The film actor appeared on the streets of Beverly Hills in a new image. The man painted his hair in a fashionable silver color. The actor again appeared in his favorite boots and jeans. He decorated it with a strap with a huge silver buckle. Mickey took a dog with him and posed for American paparazzi.

Boxer's followers on the Instagram and Twitter asked the idol to improvise more often, as well as publish such videos and new photos.

Mickey Rourke continues to star in Hollywood films. "Weaponized" and "Mercury Plains" are the last works with the participation of the legend of Hollywood. 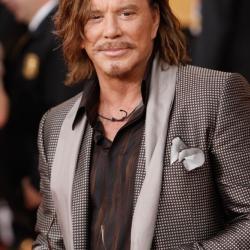