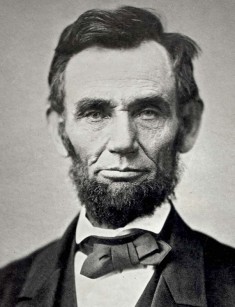 Abraham Lincoln was born in Hodgenville, Kentucky, on February 12, 1809. His father was Thomas Lincoln, a respectable farmer, and his mother, Nancy Hanks, moved to the western Virginia state. Alas, young Abraham was not destined to grow up in a wealthy family: in 1816, his father lost most of his property during the judicial disputes, which was the result of a fateful mistake in the documents on the property of the farmer.

The bankrupt family moved to Indiana, hoping to try their luck in developing free lands. Soon Nancy Hanks died, and the elder sister Sara was responsible for caring for Lincoln Jr. In 1819, Thomas Lincoln, recovering from the loss, married Sarah-Bush Johnston, a widow who at that time had three children from her first marriage. With Sarah-Bush, the future president had a very warm relationship, and gradually she became his second mother.

Young Abraham had to take up any work in order to help his family to make ends meet. An exception was fishing and hunting: young Lincoln never took such work, as they did not correspond to his moral principles.

Abraham became the first in his family, who learned to count and write, and also fell in love with reading. It is interesting that the young man attended school, in total, no more than a year. He was forced to work to help his relatives, but his desire for knowledge helped him to become an intelligent person.

When Abraham Lincoln turned 21, his large family decided to move. At the same time, an intelligent young man, whose height was 193 cm, and the level of erudition was not lower than his peers, who had full school education, decided to start an independent life. Until then, he worked properly for the benefit of the family and gave all his income to his parents, but such works did not suit him in the context of his life as a whole.

It is worth noting that the story of success of Abraham Lincoln is a story of not only inspiring victories, but also slaps from fate. The politician withstood it with dignity. So, in 1832 he wanted to be elected to the Legislative Assembly of Illinois, but failed. Then Lincoln even more seriously than before, began to study the sciences (especially he was interested in law).

In parallel, the young man in the company with his friend tried to make money at a trading store, but the business of young entrepreneurs was not very successful. Abraham counted every penny and his only shelter was reading and dreaming. At the same time, Lincoln formed his negative attitude towards slavery.

Subsequently, the young Abraham managed to get a job as a postmaster in New Salem, and after a while he took up the position of surveyor. Living in New Salem, Lincoln got one of the most widely known of his nicknames: "Honest Abe."

The politician had lack of money, so he often had to borrow from his friends. But he always repaid his debts on time. That is why he received such a nickname.

The beginning of political career

In 1835, Abraham Lincoln again tried to be elected to the Legislative Assembly of Illinois, and this time he succeeded. In 1836, the politician successfully passed the exams for the official title of lawyer, having studied all areas of law independently. Subsequently, he worked long enough in the legal field. He took difficult cases and refused to receive payment from citizens with low income who needed his help. In his speeches, Abraham always stressed democratic values.

In 1846 Honest Abe entered the House of Representatives of Congress. As at the election to the Legislative Assembly of Illinois, he was elected from the Whig party. Lincoln condemned the aggressive actions of the United States in the US-Mexican war, supported the desire of women to get the right to vote, spoke for the gradual elimination of the slavery.

After a while, Abraham had to move away from politics for a while, because his negative attitude toward the American-Mexican war, which was then very popular among the masses, became the reason for the politician's rejection of his native state. Because of this failure, Lincoln began to devote a lot of time to legal practice.

In 1854, the Republican Party of the United States was established, which supported the abolition of slavery, and in 1856 the politician became part of a new political force. It should be noted that at that time many former supporters of the Whig party joined the Republican Party.

Few years later, along with the representative of the Democratic Party, Stephen Douglas, he ran for the US Senate. During the debate, Lincoln once again expressed his negative attitude towards slavery, which allowed him to create good reputation, although he lost the election.

President of the U.S.A

In 1860, Abraham Lincoln was nominated as a candidate for the presidency of the United States from the Republican Party. He was known for his diligence, high moral principles, had the glory of "a man from the people." Interesting facts about politics were read with interest, and his photos were invariably associated with honesty and valor. As a result, the politician won elections, gaining more than 80% of votes.

However, the newly elected president had a lot of opponents. His policy, excluding the possibility of the spread of slavery, was the reason for the announcement of several states on the withdrawal from the US. Presidential statements that the abolition of slavery in those states where it functions is not planned in the near future, could not resolve the irreconcilable contradictions between the supporters of the slave system and its opponents.

Civil War in the USA

The war between 15 slave states and 20 states, where the slavery did not exist, began in 1861 and lasted until 1865. It was a serious test for the newly elected president. In this war died more American citizens than in any other armed clash in which the States participated.

There were a lot of small and large battles and the war ended with the capitulation of the Confederacy. The states which stood for the slave system united. The country had a difficult process of liberation of the black population.

During the war, the president's primary interest was democracy. He made a lot of efforts in order to organize a bipartisan system, elections, freedom of speech and other civil liberties of US residents even in the conditions of the Civil War.

Second term and the murder

During the war, Abraham Lincoln made a lot of enemies. However, the president benefited from the cancellation of the transfer of arrested citizens to court. All deserters, as well as the supporters of the slave system, could be immediately imprisoned.

People also liked the act on Homestead, according to which a man, who began to cultivate a curtain land and build a building on it, became its full owner.

All this allowed Lincoln to be re-elected for the second term, but he did not govern the country for a long time. On April 14, 1865, five days after the official end of the Civil War, Abraham Lincoln was killed in the Ford Theater by the actor John Wilkes Booth, who supported the southerners. It is noteworthy that later many coincidences were found between the circumstances of Lincoln's death and the fact that approximately a century later John Kennedy was killed.

Today Lincoln is considered one of the most worthy US presidents, which prevented the disintegration of the nation and made great efforts to liberate African Americans. In Washington, a statue of the President was erected, as gratitude of the entire American people. Quotes of 16 US President became a part of the wisdom of Americans.

Honest Abe, most likely, suffered from such a disease as Marfan syndrome. In addition, the frequent companion of Abraham was depression: they say that in his youth the young man even tried to commit suicide several times.

Abraham Lincoln with his wife

In 1840 the future president met Mary Todd, and in 1842 the couple got married. His wife always supported her husband in all his endeavors, and soon after his death she lost her mind.

Four sons were born to the family, but, alas, many children of the Lincoln family died early. The only child of Mary and Abraham, who survived adolescence and died in old age, was the eldest son Robert Todd Lincoln. 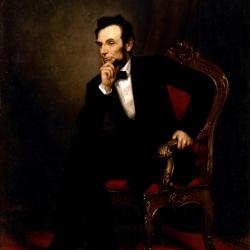