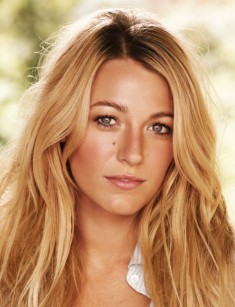 Blake Lively is an American actress and model. She is known for playing in the films "Gossip Girl" and "The Shallows".

Blake Lively was born in Tarzan, a suburb of Los Angeles. Ernest Brown, the father of the future movie star, is a famous actor. The man married Elaine Lively, who worked as a talent scout, took the woman's surname, and adopted her three her children from the first marriage. Also, there is one more child in the family, Eric Lively. He is 6 years older than Blake. It is interesting that all the children followed in their father’s footstep and became actors.

However, this choice of profession is not surprising. In childhood, Blake visited the acting classes, which her parents attended, as they did not want to leave the girl with a nanny. The child understood the theatrical art, not even suspecting that it would help in the future. Little Blake just repeated after her dad and mom the movements, gestures, and manners. As a result, childish spontaneity and emancipation together with a talent gave a positive result.

Blake Lively spent her childhood at film studios and in the rehearsal rooms. In future, Blake recalled that her mother took the girl to Disneyland at least once a week. According to the movie star, the mother hoped to give her new experiences. She relaxed with her daughter and tried to make her forget at least for a moment about the world of cinema.

It's interesting that in her childhood Blake didn’t want to become a film actress, although at 11 she already got experience shooting in the episode of the film "Sandman". Everything happened without any extra efforts, as Eric's elder brother took the girl with him to audition. At the casting, the director and producer immediately noticed a talented actress. As a result, Blake got a role in the movie "The Sisterhood of the Traveling Pants", released in 2005. In this film, the American plays one of the four main roles. After participating in the movie "The Sisterhood of the Traveling Pants", Blake Lively was nominated for the Teen Choice Award but the victory went to another actress.

The girl received her first award after starring in the film "Accepted", in which Justin Long became her partner. The comedy was criticized by experts but film critics liked Lively.

A year later, the film "Elvis and Anabelle" was released, where the actress played the main female role. Lively's character suffers from bulimia. She cannot control eating but at the same time dreams of winning a beauty contest. The game of the actress was again noted by critics. Some even called this role a breakthrough for Miss Lively.

But the actress became successful after playing Serena van der Woodsen in the teen series "Gossip Girl", which was broadcast for five years. In total, 6 seasons of the series were released. Blake Lively took part in each part.

Each role of the young actress deserved praise from critics. Even episodic role in the film "The Private Lives of Pippa Lee" released in 2009, was called "sensational."

It is interesting that the greatest amount of enthusiastic reviews (except for the role in the series "Gossip Girl"), Blake Lively received for her roles in commercially unsuccessful films as well as average films "New York, I Love You", "The Town" and "The Age of Adaline".

In addition to participating in films, the actress has time for business projects. In 2015, Lively launched an online store of designer items “Preserve”. In an interview, the actress said that the website of creative designer clothes, costume jewelry and accessories was launched earlier than it was planned. The project did not meet the expectations. In the future, the celebrity plans to launch new projects with the same name.

American television series "Gossip Girl" brought popularity to the actress. The film, which was created on the basis of the novels by Cecily von Ziegesar, was very successful among the American audience. The picture was broadcast for 5 years - from 2007 to 2012.

Initially, this project was supposed to be created in a different format. The Hollywood actress Lindsay Lohan should have starred in the film. Nevertheless, this did not happen, and the new idea was implemented by the FOX channel.

Blake Lively played the role of Serena van der Woodsen, a bright and open girl, surrounded by fans and newspaper photographers. The manners of Serena causes sympathy but at times she acts in her own way, having conflicts with friends.

The film "The Shallows"

"Gossip Girl" for a long time was called the best film in the creative biography of the actress. But in 2016, the fans' opinion changed the premiere of the film "The Shallows". In the thriller, the film actress played the main role, the surfers Nancy Adams.

The film tells of the American Nancy Adams, who came to Mexico on a wild beach, where her mother used to surf. During holidays, the girl found a dead whale near the shore. Soon it turned out that a white shark was nearby, which attacked Nancy.

The shark causes an injury but the girl managed to survive. She swims to a small reef island. Nancy evaluates the situation, trying to get out of such a situation as well as to protect herself from attacks of sharks thirsty for blood. Gradually, the girl's health worsens, she bleeds and the phone was on the beach. There is no one to help her. Later, Nancy fights the shark.

Fans of Blake were delighted with her role because the actress showed the feelings of the character really emotionally. In this dramatic thriller, Lively showed her acting skills, which she developed for years.

The first relationship and romantic feelings Blake Lively had to her childhood friend Kelly Blatz, with whom the girl had relations in 2004. The couple even managed to play together in one of the films but the relationship ended after three years spent together.

In 2011, Miss Lively began dating with another partner in the film Ryan Reynolds, with whom the actress played together in the movie "Green Lantern". The Hollywood actor soon became the husband of the actress. On September 9, 2012, the couple had a wedding. In December 2014, Blake and Ryan became parents, their daughter was born. The baby was called a non-standard for a girl name James Reynolds. In 2016, the couple’s second daughter Ines Reynolds was born.

Blake Lively and Ryan Reynolds try not to show their personal life. American journalists call them the most secretive pair of Hollywood.

Blake is a passionate shoes lover. The actress said that she has a cabinet full of shoes in her house, where there are more than 300 pairs of different shoes.

It is known that the French fashion designer Christian Louboutin even named the shoes with colored straps in honor of Blake. These shoes were called "Lively". They were sandals with seven gradient straps - from dark green to burgundy.

Once the actress posted photos on which she was at the art salon. Lively is interested in painting and wants to try herself in this art.

Blake also likes to cook. A special passion celebrity feels for baking. The woman often shares her culinary masterpieces on the Instagram. Fortunately, she is in a good shape (height - 178 cm, weight - 63 kg).

In 2017, fans of the film actress discussed the appearance of Lively on the red carpet of the Met Gala Institute of Costume. The actress chose the Versace luxurious evening dress but during the event, an awkward situation occurred. The girl was in a long dress, embroidered with bright blue feathers. Climbing the stairs with her husband, Blake Lively almost fell but managed to keep her balance. Despite the unpleasant incident, the actress continued to pose, demonstrating her bright appearance. Happy and stylish, the star couple didn’t pay much attention to this situation.

In 2016, the American press reported that Blake Lively is pregnant. The assumptions were confirmed when the Hollywood celebrity published several pictures from Rhode Island, where the actress vacationed with her husband and friends.

Already in 2017, the actress in an interview with American journalists commented on the possibility of filming the continuation of the series "Gossip Girl". According to the actress, she is not ready to give years to one project because now she has children. She considers it will be difficult for her to work and to bring up children. Today Lively tries to participate in absolutely new projects, not wanting to return to the past. The actress does not deny the possibility of a new season of the series.

Blake Lively has a rather closed lifestyle, preferring to stay away from public life. Such secrets only warm up the interest of fans who constantly follow the actress's account on the Instagram and other social networks, trying to learn more new information about the personal life and work of the idol.

For the last time, the family of the actress appeared in public in December 2016, when Ryan Reynolds received a star at the Walk of Fame. Then the woman came to the event with the children. 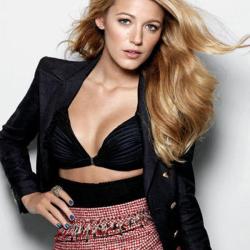