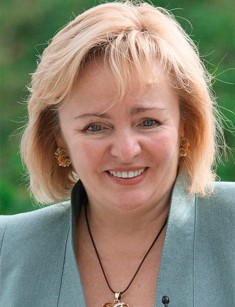 Lyudmila Putina is the former first lady of Russia. For many years people were interested in her personal life. The reason for this interest was her marriage to Russian President Vladimir Putin. But the public was more excited by their divorce, despite the fact that they broke up in a calm manner. In the years of family life with the Russian president Lyudmila Alexandrovna tried to avoid publicity. She attracted attention of people, and they still have many versions about the life of Putin's ex-wife after the divorce.

Lyudmila Alexandrovna (born Shkrebneva) was born on January 6, 1958 in Kaliningrad to a family of workers. Lyudmila's father Alexander Avramovich worked at the mechanical plant, the mother Ekaterina Tikhonovna worked as a cashier at the auto cade. The family of the future first lady wasn’t rich, they lived in a small flat located in the working quarter of Kaliningrad. Parents raised their daughter in strict manner. From childhood she was accustomed to discipline and housekeeping.

Lyudmila Alexandrovna studied in secondary school No. 8. Teachers recall her as an ordinary pupil with a special passion for literature and poetry. She also had a distinct artistic quality - she loved singing songs and reading poetry, due to which she has always appeared in spectacles.

At the end of school life, in 1975, Putin's future wife got a job as a postman in a local post office, which was not the last profession she had mastered. After the post she became a student of a turner at the Torgmash plant, where she received the 2nd rank. Then she worked as a nurse in a local hospital and in 1980 became a flight attendant in Kaliningrad and for the next two years she was working in the sky.

Only in 1981, Lyudmila Putina understood who she wanted to be in life, and entered the Leningrad State University, the Department of Philology and studied several foreign languages. At the third year of the university, she had a fateful meeting with Vladimir Putin, which changed her entire life.

Before Lyudmila Putina became the first lady of Russia, she had an active career, and for several years taught German language at the Leningrad State University. In the middle of 90s, she worked as a manager of fashion boutique "Trussardi", and then worked as a representative of "Telecominvest" for several years.

Lyudmila Putina – The Wife of the President

When Vladimir Putin won the presidential elections, Lyudmila received an official status. She had an active social and political life, created various charitable projects, and organized the Center of the Development of the Russian language, which today solves a number of problems related to the education and orthography.

In 2002, for her contribution to the cultural exchange between Russia and Germany, Lyudmila Putina was awarded the prestigious Jakob Grim Prize, and after that not once she became the laureate of international prizes for the support of the Russian language abroad. In addition, she constantly hosted many delegations from Western countries and visited various regions of the world on the issue of state awards to citizens not only in the Russian Federation, but also far beyond its borders.

The personal life of Lyudmila Putina at all stages is closely connected with Vladimir Putin. That is why people were interested in her life. With the future husband, the first lady of Russia met in 1983 in Leningrad at the box-office of the Leningrad City Council. The wedding of Lyudmila and Vladimir Putin took place 3 years after they met. After this, the family, because of Vladimir Vladimirovich's official duties, had to move to Germany for 4 years.

During this period their two daughters, Maria and Katerina, were born. Now they live in Moscow. According to the media, Putin’s daughter Maria graduated from medical university and is a candidate of medical sciences in endocrinology, and Katerina graduated from Moscow State University and today she is the head of the Center for National Intellectual Reserve at this university.

The family life of the couple from the first days was connected with the work of the head of the family; as a result the wife and the children couldn’t fully enjoy his attention because of the constant employment at work. Lyudmila Alexandrovna herself remembers that after her husband’s victory in the presidential election, she realized that their family will be under strict control.

Vladimir Putin mentioned Lyudmila rarely. Journalists understood that the head of the country was against interference in his private life.

The Divorce of Vladimir Putin and Lyudmila Putina

On 6 June 2013, Lyudmila Putina and her husband publicly announced the termination of their marriage based on a mutual decision. They explained that there is no place for family relations in the working schedule of the Russian leader. Their divorce was unexpected and loudly discussed, filled with rumors and speculations about the causes of their broke up.

Lyudmila Putina is a deeply religious woman. There were rumors that after the divorce the woman went to the Snotogorsky monastery. For more than 20 years Lyudmila had close relations with the Matron. But other sources say that Putin's ex-wife married for the second time the famous musician Mikhail Mikhailov, with whom Lyudmila Alexandrovna often appeared at social events.

Both of these rumors were not officially confirmed, since neither before nor after the divorce Lyudmila and Vladimir Putin did not comment on their personal life. In the Kremlin, on April 1, 2014, it was confirmed that the divorce of the Russian President was officially signed.

In 2016 in Germany there was a shocking interview, allegedly recorded with the words of Lyudmila Putina, who said that her former husband and the Russian president is dead, and not for one year. According to the press, the double replaced the murdered president, and Lyudmila and children received threats. That is why the woman was forced to remain silent. Russian media are skeptical of such statements. Some journalists do not believe in problems in the president's family, connecting the divorce to the adopted law on "deputy wives" and a wave of divorces in the upper echelons.

In March, 2017 there were rumors of a new lover of Lyudmila Putin. The woman was noticed at the airport of London together with the chairman of the board of the Center for the Development of Interpersonal Communications Artur Ocheretny. Lyudmila and Arthur got into one car, which caused rumors. There were no official comments on this issue in the press. 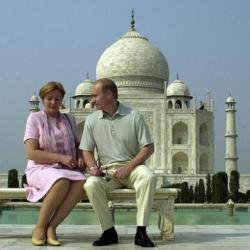