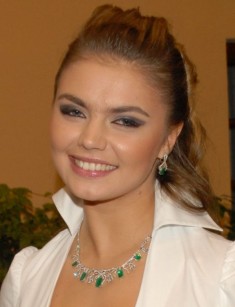 Alina Kabaeva is a Russian sportswoman,a public and political figure, and a manager. Biography of Alina Maratovna Kabaeva is full of victories, scandals and intrigues. The nationality of the sportswoman not once caused numerous disputes in the press. It is known that the future winner of the 2004 Olympics was born in Uzbekistan to a family of athletes. Lubov Kabaeva, Alina's mother, played for the national basketball team. Marat Kabaev, the father of the future celebrity, dedicated his life to the football team “Pakhtakor”.

Alina spent her childhood training and training. Alina Kabaeva decided to become an athlete; her parents did not force her to follow in their footsteps. Her Mother and father firstly suggested their daughter to become a figure skater, but later took her to rhythmic gymnastics.

This happened because of the absence of good schools in figure skating in Tashkent. Alina was three years old when she first entered the gymnastics gym. The girl owes her success to her first coaches - Lyudmila Nikitina and Anelia Malkina.

When Alina Kabaeva was 12 years old, she and her mother moved to Moscow. Her mother wanted the talent of the girl not to be wasted. The capital gave the athlete an opportunity to study in the gym with the legend of rhythmic gymnastics - Irina Viner.

Looking at her childhood photos, Alina Kabaeva recalls that at the first meeting in the eyes of the coach of the Russian team there was a horror. The girl was not professionally prepared, and later had to work hard to achieve impressive results. The athlete was immediately told that it was necessary to get rid of excess weight, because at that time coaches managed to call the young talent "TV with legs."

Irina Viner told the girl about a strict diet that guaranteed the results. Alina practically did not eat, she drank only water. There were a lot of problems, but Viner quickly saw talent in the athlete and began to prepare her for serious achievements. Gymnastics has become an integral part of the girl's life. For the first time Alina Kabaeva got into the Russian national team in 1996. Soon the girl won her first titles.

At 15 years Kabaeva won the European Championship. In future the athlete became an absolute champion of Europe three more times.

The main achievement of Alina Kabaeva is the title of the only four-time European champion. The last award was waiting for the Russian woman in Spain, and the first title the athlete won in Portugal. The gymnast calls Japan her "lucky" country. In the Land of the Rising Sun the athlete won the most significant victory in her career. Alina Kabaeva also doesn’t forget Spain, because in two years the Russian woman won the gold medals of the continental championship in Granada.

Alina calls her favorite exercises with a stick and a ribbon.

In 2000 at the Olympic Games in Sydney, Alina Kabaeva became a universally accepted winner, showing best results in the final performance in the exercises with a skipping rope, a ball and a ribbon. Nevertheless, the Russian athlete made a big mistake in the performance with the hoop. The result was the third place in the tournament.

The 2004 Olympics, held in Athens, became a triumph for Alina Kabaeva. The Russian woman showed the best results in the exercises with a ball, stick and ribbon, and lost only to Irina Chashchina in the exercise with a hoop.

The gymnast planned to participate in the Olympic Games in Beijing, but this did not happen. In 2007, Alina Maratovna Kabaeva completed her sports career.

In 2001 Kabaeva was involved in a scandal. Irina Chashchina and Alina Kabaeva were caught in using furosemide. There was a serious scandal, and the gymnast was not allowed to participate in serious competitions for two years.

Then Alina Kabaeva lost all the awards received at the Goodwill Games, as well as at the 2001 World Championships. The first year of "expulsion" she had no right to participate in competitions, the second year was less severe - the punishment became conditional, the Russian woman could compete in tournaments, but under strict control of judges and doctors.

As it became known several years later, the furosemide cannot be called doping, because the drug causes the excretion of forbidden substances from the body.

As you know, a talented person is talented in everything. Alina Kabaeva is not an exception: she pleased her fans with roles in the movies. The Russian woman appeared in the image of a ninja in the film "Red Shadow" of Japanese production. The athlete was also noticed in the commercials, as well as in the video of the band "The Game of Words" for the song "Alina Kabaeva".

Alina Kabaeva did not refuse from the model shows. In the period of full disqualification the girl became the host of the program "Empire of Sports" on 7 TV Channel.

For the first time in politics, Alina Kabaeva was noticed in 2001 at the age of 18. Then the gymnast received the right not only to vote in the elections, but she was also elected. Before 2005, Kabaeva was listed in the "United Russia" party, and the next few years were in the Public Chamber of the Russian Federation, where she discussed the development of charity and volunteerism, and also discussed the problems of insurance of athletes. Kabaeva had a position on that issue. Then the girl went to the State Duma.

In addition to achievements in sports and political career the celebrity has two higher educations. In 2007, the gymnast got the diploma of the Moscow State University of Service, and two years later received the diploma from one of the most prestigious universities of St. Petersburg.

Alina Kabaeva from 2002 to 2005 had relations with David Museliani, at that time the captain of the police. The couple was going to get married, but Alina and David broke up, deciding to remain friends.

The personal life of Alina Kabaeva has become one of the most discussed topics of recent times. Recently, there were rumors that Alina Kabayeva and Vladimir Putin were supposed to have a wedding. First publications about the relations between the athlete and the politician appeared in 2008 on the pages of the newspaper "Moscow correspondent". The whole country began watching with a sinking heart the "relations" of the famous sportswoman and the Russian prime minister. The publication caused a scandal, Putin and Kabaeva refused to comment on this topic, the Olympic champion demanded to write a refutation.

In 2013 in press again appeared the information that Kabaeva and Putin secretly got married in Valdai. Dmitry Peskov, a Press Secretary of the President Putin, said that these rumors were untrue, and the head of the state is too busy to devote his time to personal life.

Also in 2013 Alina Kabaeva in an interview to the "Bolshoi Sport" magazine commented on the rumors saying that she has no children.

Nevertheless, in 2015, the Neue Zürcher Zeitung reported that Kabaeva gave birth to a son in one of the Swiss clinics. The sportsman did not comment on this situation, which was the reason for the next assumptions in the media.

The Olympic champion attends public events more often, and looks more beautiful than ever. In May 2017 the famous Russian woman appeared in the concert hall "Russia", where the festival of rhythmic gymnastics "Alina" was held, the organizer of which was the charity fund of Kabaeva. The official website of the sportswoman said that the event was attended by hundreds of children who have already achieved serious success in rhythmic gymnastics. The participants presented choreographic performances; each athlete received an original suit.

In total, there were more than 6 thousand participants on the festival. The theme of the event was fairy tales. Famous dance and music groups of Russia, pop stars, theaters and cinemas didn’t avoid the event.

Alina Kabaeva told the Russian journalists that the preparation of the holiday took 5 months, and also shared the secrets of her beauty. Fans still admire her appearance (the height of Alina is 166 cm, weight - 50 kg).

In an interview Alina said that the secret of her beauty is healthy food and sport.

"My advice is to move more. And, of course, try not to overeat. Everything is possible". And said that she was against diets.

In February 2017 Kabaeva appeared at the opening ceremony of the international tournament in rhythmic gymnastics Grand Prix Moscow 2017. At the concert, organized in honor of the opening of the sports competition, the champion appeared in the white dress, which perfectly emphasized her figure. Users of the Instagram and other social networks were also delighted with the appearance of the sportswoman, looking through the published photos on which Alina Kabaeva was in the company of other celebrities.