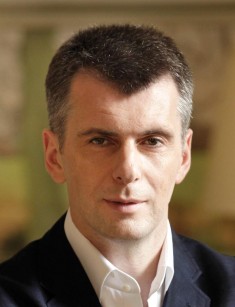 Mikhail Prokhorov is one of the richest Russians and a beginning politician who makes a huge contribution to the cultural development of Russia. Having achieved success in business, the billionaire intends to reach the heights of the political elite of the Russian Federation, as he promised to give all his fortune to charity if he was elected president.

Since 2012, the businessman devoted himself to politics and founded the Party “Civil Platform”. As a head of the party he intended to create fair and free civil society, to strengthen Russian leadership in the global world.

Childhood and youth of Mikhail Prokhorov

Mikhail Dmitrievich Prokhorov was born on May 3, 1965 in the north-east of Moscow to the family of the head of the international administration of the Sports Committee Dmitry Ionovich and an engineer Tatyana Mikhailovna. The future billionaire was the second child in the family. The businessman has an elder sister Irina, a literary researcher and publisher of the New Literary Review magazine. She also works as a TV presenter on the RBC channel owned by her brother.

Mikhail Prokhorov had a simple childhood and youth like other children of that time. The future businessman was considered a diligent student in the English special school No. 21, from which he graduated with a gold medal. By that time, Mikhail's father had become a head of the Glavprofobr department, so the young man did not have problems with entering the prestigious MFI, and he also managed to get the support of the Komsomol district committee.

At the end of the first year in university, the future entrepreneur decided to pay his debt to his homeland and joined the Soviet Army. Two years later, Mikhail returned to college and in 1989 graduated with honors. Prokhorov got a diploma and became a young specialist in the field of economics and, thanks to his erudition, was able to become a successful entrepreneur in 1990s, during Gorbachev's reforms.

The career of businessman Mikhail Prokhorov began in his student years. When he return from the army, a young man, in parallel with his studies at the university, got a job as a loader. He organized small but profitable business of making "boiled" jeans that were fashionable during Perestroika along with his fellow student Alexander Khloponin.

In the same period, the future metallurgical tycoon got to a high position in the International Bank for Economic Cooperation, where he headed the the management department. At the same time Mikhail was not bothered by the low salary, as his business flourished - while Prokhorov was in the service at the IBEC, Khloponin was in charge of the production. Prokhorov himself was engaged in sales of "boiled jeans", distributing jeans among his colleagues.

In 1991 the biography of Mikhail Prokhorov was marked by an acquaintance with a businessman Vladimir Potanin, with whom the future billionaire built his empire. In 1992 Mikhail and Vladimir Potanin the "International Financial Company". After the collapse of the USSR the assets of the state MBEC in the amount of $ 400 million were transferred to the company. Along with the assets, IFC also got customers of the state bank.

A year later, Prokhorov and Potanin created Onexim Bank and became equal business partners, who worked in tandem for 15 years. During large-scale privatization of that time, bankers managed to acquire stakes in a large number of industrial state enterprises, including Norilsk Nickel, Sidanko, Novolipetsk Steel, Novorossiysk Shipping Company and others. And the partners bought these shares for a third of the cost, which made the investors the richest people in Russia.

In 2006 Prokhorov expanded his ownership and established OS “Polyus Gold”. Mikhail Dmitrievich became the owner of a controlling stake in the Russian gold mining company, which is the largest not only in Russia, but also in the world.

In 2007 disagreements between Potanin and Prokhorov began, the partners decided to share the business. The process was complex, loud and unpleasant, so the oligarchs managed to come to a compromise only in a year and to find a solution to the issue of sharing the assets.

In 2008 Mikhail Prokhorov decided to invest in the media business. The billionaire became one of the founders of the media projects "Live!" And "RBC", and also invested in the production of a hybrid and low-budget "Yo-mobile". Photos of the Russian oligarch began to be recognized in the world.

Having achieved brilliant success in business, the metallurgical tycoon decided to change the direction of his activity and to become a politician. In 2011 he join the leadership of the political party Right Cause, to the development of which he invested $ 100 million of his own funds. But few months later Prokhorov came into conflict with some regional representatives of the party, as a result he left the party. The scandal with the "Right Cause" forced the businessman to disappear for several months from public politics, where he returned after a while as a candidate for the presidency of Russia.

The basis of Mikhail Prokhorov's pre-election campaign was the opposition to the main candidate for the presidency Vladimir Putin, as well as the announcement of new ideas on the global fight against corruption in the country. As a result the businessman-politician took the third place among the candidates, gaining almost 8% of the vote during the presidential election in 2012. According to the experts, it means that he will get the status of a serious politician in future.

The loss in the presidential election did not break the political spirit of the billionaire; Prokhorov decided to continue his career in this direction. He didn’t abandon the idea to break into the upper ranks of the political elite. In 2012, Mikhail Prokhorov creates the "Civil Platform" party and becomes its leader. The main goal of the "Civil Platform" was the creation of a strong and professional faction in the State Duma, where the party intended to get after 2016 elections. Nevertheless, in March 2015, Prokhorov decided to leave the party.

The personal life of Mikhail Prokhorov for many years is the subject of discussion in Russian society. The billionaire causes such interest in people because of his love for women. However, the metallurgical tycoon has never been married and is considered one of Russia's most enviable bachelors.

The tall man (the height of Michael is 203 cm) is always in the center of attention. More than once the media reported that Prokhorov marries a simple girl from Krasnoyarsk region or an Italian actress Monica Bellucci, and is also ready to get married to other famous women, but this never happened.

Also there were rumors that Prokhorov had a daughter. Some Russian media held public interest in publications of this kind, especially during the election campaign, but such assumptions turned out to be a fiction of the yellow press.

The oligarch assures that he is ready to marry and give his heart to the only woman who can fall in love with him, rather than the wealth that is attached to him. Numerous women of the billionaire would happily try on the status of "Mikhail Prokhorov's wife", but he does not hurry to get married.

At the same time, a businessman-politician has an active lifestyle and is fond of various kinds of sports: kickboxing, windsurfing, mountain skiing, and sports aqua bike. Also, Mikhail Prokhorov pays attention to the cultural and sports development of the country. To do this, the Mikhail Prokhorov Foundation was created, run by Irina, the sister of the billionaire. Michael provides financial support to the hockey, football and basketball units of CSKA, headed by the Russian Biathlon Union.

In 2015 the net worth of Mikhail Prokhorov was estimated at $ 9.9 billion, which made it possible to take the 10th position in the list of the richest people in Russia according to the Forbes financial and economic magazine.

According to the income declaration filed by him during the presidential race-2012, the billionaire owns a land and a house house in Moscow suburbs with a total area of 25 thousand square meters, as well as 4 apartments in Moscow, the total area of which is 1000 sq.m. At the same time Prokhorov owns two mega yachts Palladium and Solemar, Gulfstream G550 plane and basketball club Brooklyn Nets, whose cost is estimated at $ 1.5 billion.

The Russian public closely follows the news from the life of the billionaire. In June 2017 Russian media reported that Mikhail Prokhorov will play in the film "What Men Talk About." Details of the episode in which the billionaire participates are not disclosed.

It is assumed that the shooting will be held in Moscow. The creators of the film will be film company "STV" by Sergey Selyanov and the "Strela" film studio. The company refused to tell the fee of Prokhorov.

The audience of the new part of the franchise is expecting surprises, but the characters are already loved by viewers. They are performed by Leonid Baratz, Alexander Demidov, Kamil Larin and Rostislav Hait. This time, the friends will spend time talking on the road to St. Petersburg. According to the plot, the characters will have to "worry about Mikhail Prokhorov."

In 2016 the American press reported that Mikhail Prokhorov put up for sale a 49% stake in the basketball club Brooklyn Nets, which he owns. Already in April 2017 this information was confirmed. 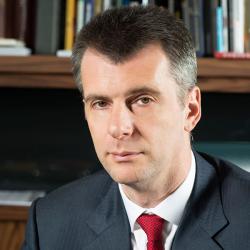