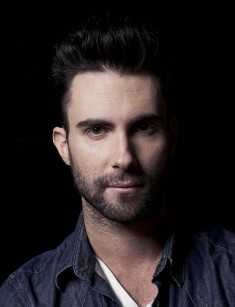 On March 18, 1979 in Los Angeles, California, in the family of Petsy Noah and Fred Levine, the boy Adam Noah Levin was born. The parents of the future singer are Jews, therefore the religion of Adam is Judaism.

Adam's mother worked as a lawyer. Fred Levine was a coach of a basketball team. Adam and his brother Michael loved basketball and it was their favorite hobby. In addition, basketball gave the seven-year-old boy self-confidence - during the local YMCA championship he saved the team by making a brilliant throw to the basket in the last seconds of the game.

Unfortunately, when Adam was 7 years old his parents divorced. This fact did not affect the love of the young athlete to basketball. Even now he is a big fan of "Los Angeles Lakers". Moreover, Adam has two half-sisters Julia and Lisa and a brother Sam.

The singer studied in a private school Brentwood in Los Angeles and in the prestigious Five Towns College in New York.

Adam Levin had a difficult path in order to become a popular musician and a singer, to gain recognition not only of the audience but also of professional critics. His career began with an unsuccessful attempt.

When he studied at school, Adam Levine visited Hancock Performing Arts Festival. Impressed by what he saw in 1995, he and his friends Ryan Dasik, Mickey Madden and Jesse Carmichael decided to organize their own music group. The name of the quartet was "Kara's Flowers". They all had sympathy towards the girl with that name.

Their first performances at private parties inspired young musicians. They signed a contract with "Reprise Records” studio. Their debut CD "The Fourth World" did not bring the expected success.

In order to get popularity, the guys even starred in one of the episodes of the cult series "Beverly Hills". But this attempt failed to raise the rating of the band. Soon the contract with the recording company was terminated.

After the collapse of their dream, Adam and Carmichael went to study in New York, and their friends continued their education in Los Angeles.

After returning to their hometown, the four friends reunited and tried to give a second chance to the music group. Now they became the quintet, because the guitarist James Valentine joined the band. The musicians chose their new name - "Maroon 5".

The first album, recorded in 2002 at "A & M / Octone Records" studio, was dedicated to Adam's feelings for his ex-girlfriend and was called «Songs about Jane". The songs brought fame to the musicians.

Adam Levin’s debut on television as a contestant judge/coach on the show project "The Voice" was quite successful.

The singer has also starred in films. In 2012, he successfully starred in the movie "American Horror Story." A year later he appeared in the comedy "Begin Again".

The heartfelt stories of a talented and handsome musician were regularly discussed not only by fans, but also appeared on the front pages of popular magazines.

The first true love of Adam, who motivated him to create his first album, was Jane Herman. Unfortunately, they broke up after six years of relations. It was Jane who was the initiator of a breakup.

Probably, these relations were the reason why Adam behaved frivolously with his girlfriends. He changed girls very often. He was dating a model Angela Belotte, Hollywood stars Kirsten Dunst, Natalie Portman and Jessica Simpson, a famous Russian tennis player Maria Sharapova, a model Karolina Kurkova and a waitress Rebecca Ginos.

Adam had 2 years relations with the Russian model Anna Vyalitsyna.

In 2011 Adam met his future wife Behati Prinsloo- Victoria's Secret Angel. He fell in love with this beautiful model from Namibia. The couple had some quarrels, but in 2013 they announced their engagement.

The wedding of Adam and Behati Prinsloo took place in Mexico in summer, 2014. The relatives and their colleagues were invited at the celebration. For the years that have passed since their marriage, the couple proved their feelings. Prinsloo gave birth to the couple's first child, a daughter Dusty Rose Levine.

In 2013 the young handsome man became the sexiest man on the planet according to "People" magazine. He has an extraordinary character and does not stop to shock his fans.

• A photo of a naked torso of an outrageous singer shows his love to tattoos. On the body of Adam there is image of a branch of sakura, a dove, a guitar, a tiger and even a studio, where the first album of Maroon 5 was recorded.

• Sports enthusiasm in the life of the singer has undergone a number of changes. From basketball Adam went to weightlifting. But this hobby resulted in serious injuries: fractures of thorax and clavicle. After that, the energetic musician had to practice yoga.

• The talented singer also expressed his love for music as a designer. The result of this hobby was the collection of guitars "First Act".

• The only attempt on his life was an attack by the studio, where he took part in the "Jimmy Kimmel Show." The impudent hooligan dared to throw a famous performer with powdered sugar.

• During the participation in the "Voice", there were bloody shootings in the streets of Orlando. Among the numerous victims was Christina Grimmi. Adam was her mentor and he not only expressed the words of condolences to her family, but also took all the costs of organizing the funeral.

Energetic and impulsive, talented and persistent, outrageous and romantic - Adam Levine opens new facets of his talent every year, without ceasing to please fans with new songs. He stars in films and participates in TV projects. 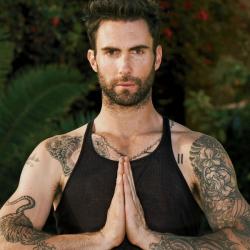