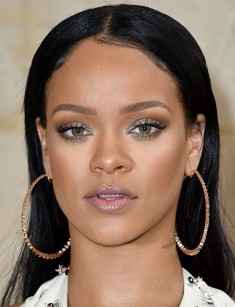 Rihanna is an American pop- and R&B singer of the Barbadian origin, one of the bestselling singers of all times, the winner of 18 Billboard Music Awards, 6 American Music Awards, 8 Grammy Awards, and the special prize Icon Award.

Rihanna (Robyn Rihanna Fenty) was born in a small town Saint Michael, Barbados. The fascinating nature of the exotic island washed by the Caribbean Sea is probably the only good the girl saw in her childhood and early youth. The family was not rich. Robyn lived with her parents and two brothers in a tiny three-room house. Rihanna has also half-brother and two half-sisters born in the father’s previous marriages. Ronald Fenty was a warehouse supervisor of a Barbadian and Irish origin. The mother Monica Braithwaite used to be an accountant and had Afro-Guyanese roots.

Ronald Fenty was a heavy alcohol and drug abuser. The whole family suffered from it, especially the eldest daughter Robyn Rihanna. She had splitting headaches until 15; doctors suspected an oncology. In addition, Robyn knew what hard work meant: she had to help her father sell clothes. When Rihanna turned 14, her parents divorced which meant both the relief and new financial ordeals.

Music and singing were Rihanna’s only outlet. The girl grew up listening to reggae which was extremely popular on the island. As a schoolgirl, she created her own music group where she sang with pleasure. Since her childhood, Rihanna knew she would be a singer. She went to amateur performance clubs, contests, and festivals. She also took part in musicals and beauty contests since she had a bright appearance. In 2004, she became “Miss School.”

The 15-year-old beauty with an unusual voice was noticed by the US producer Evan Rogers who had already had experience in working with stars, such as Christina Aguilera and Rod Stewart. The producer recognized the young Barbadian singer’s talent and invited her to America where they were recording demos. These recordings were sent out to several recording companies. This is how the popular rapper Jay-Z met her. Today, they continue to work together.

Rihanna’s career began when the girl turned 17. In 2005, her debut song “Pon de Replay” came out and became a hit immediately. Listeners were charmed with the unusual mixture of Caribbean motives and fashionable pop sound. The song reached the second position in Billboard Hot 100. The new hit single “It's Lovin' That You Want” followed – it was also a success.

The late summer 2005 was special for Rihanna: her debut CD “Music of the Sun” was released. The album got to the top ten recordings at once; 500 thousand copies were sold in the USA. The whole world recognized the Barbadian singer which gave Rihanna the opportunity to start her first tour – it was not solo, though, since Rihanna sang between Gwen Stefani’s performances.

At this period, Robyn Rihanna Fenty discovered another side of her talent: she turned out to be not only an excellent singer but also a good composer. Rihanna created many tracks from her album independently.

The second album “A Girl Like Me” appeared several months after the first one and got to top five in the USA and Great Britain. Critics consider the promo-single “SOS” to be the best work in Rihanna’s career. She used the 1980s Soft Cell electro funk here. The single was broadcast by all American and Canadian radio channels.

From June to September, Rihanna toured over the country within her solo tour “Rihanna: Live in Concert Tour.” The beauty of the popular singer was noticed: Rihanna began to advertise one of NIKE fashion lines and became the spokesmodel of Miss Bisou. In 2006, Robyn Rihanna debuted as an actress: she took part in the youth comedy “Bring It On” where she played herself. She also appeared in two series, “Las Vegas” and “Setup.”

In 2007, the singer announced the change of the musical style and appearance. The singer rejected the cute romantic image and had her hair cut and dyed in black. She started wearing black clothes with snap buttons and tight clothes. Since that moment, Rihanna has always been surprising her fans by her haircuts: her hair was red and whitened, she had the Mohawk hairdo and let her hair grow again just to have an ultra-short bob haircut in some time.

Rihanna’s third album is about these changes: “Good Girls Gone Bad” was released in summer 2007. Jay-Z and Ne-Yo took part in the recording. Justin Timberlake helped Rihanna with the song “Rehab” as a back vocalist. However, it was the song “Umbrella” with Jay-Z that turned out to be a hit. Musical critics called this single the main hit of 2007. In the USA, the song topped Billboard Hot 100 for 7 weeks; in Great Britain, it was the chart leader for 10 weeks.

All of Rihanna’s albums become the event of the year. The Caribbean singer was named the best performer in Barbados Music Awards. In 2008, the young woman received the first long-awaited Grammy Award.

In late fall 2009, the fourth album “Rated R” came out. Rihanna’s image was somehow unusual for her fans: the singer appeared brutal with an S&M hint. The experiment was a success: the major track “Russian Roulette” got to top 10 popular charts in Europe, Scandinavia, the USA, Canada, and Australia. In Russia, the song reached only the 14th position.

In summer 2010, Rihanna and Eminem recorded the single “Love the Way You Lie.” The song topped charts in America, Canada, Australia, New Zealand, and Scandinavia. The fifth album “Loud” is completely different: the music is dancing and igniting. 207 thousand copies were sold in the first week. “Loud” placed third in Billboard 100. Initially, the second song “What’s My Name?” recorded with the Canadian rapper Drake topped the chart, but the first song “Only Girl (In the Word)” replaced it as expected.

At the 53rd Grammy Ceremony, “Only Girl (In the World)” won the Grammy Award for Best Dance Recording. In 2011, the sixth studio album “Talk That Talk” was released in two variations, Standard and Gold. The major song “We Found Love” reached 9 in Hot 100, so Rihanna broke Madonna’s record and became the solo singer whose 20 singles got to top ten fast.

Besides, Rihanna became the bestselling singer of Great Britain in 2011. In 2012, she appeared in the fantastic blockbuster “Battleship” by Peter Berg.

In 2012, the singer had her seventh studio album “Unapologetic” released. It won the Grammy Award for Best Urban Contemporary Album. The first song “Diamonds” topped Billboard Hot 100, the song “Stay” was the third. Rihanna presented music videos for all songs of the album except for “Right Now.”

At the end of October 2012, Rihanna and Eminem released the song “The Monster” and, later, the music video for it. “The Monster” became the first in Billboard Pop Songs and Billboard Hot 100. With all those awards, 13 singles by Rihanna topped Hot 100. Before Rihanna, Michael Jackson achieved the same results.

In December 2013, Rihanna took part in another star duet: together with Shakira, she sang “Cant’ Remember to Forget You” that became the leading composition in Shakira’s new album.

In January 2015, the single “FourFiveSeconds” with Kanye West and Paul McCartney came out. In 2015, rumors had it that Rihanna was going to present a new album, but the release was being postponed. In January 2016, the eighth album “Anti” was finally released. In June 2016, Rihanna presented the single “Love on The Brain” and the music video for it.

Rihanna’s personal life is the subject of constant interest of paparazzi and media. Although the singer does not like talking about her private business, some information is leaked anyway. It is known that she had a short love affair with the rapper P Diddy. In 2008, the public discovered Rihanna had a romantic relationship with the Afro-American singer Chris Brown.

However, tabloids were savoring the scandalous details of this relationship soon. Rihanna was severely beaten by Chris Brown in his car and even fled the crime scene. He received a conditional 5-year sentence. In 2001, Chris announced he wanted to restore the relationship and even got a tattoo on his neck that pictured Rihanna’s beaten face. In summer 2012, Chris and Robyn recorded the song “Birthday Cake.” However, the relationship was not the same as it used to be.

After this moral trauma and tragic breakup, Rihanna got new tattoos that reminded her of what had happened. Small guns appeared on her sternums, and she also had the words “Never a failure, always a lesson” on her collarbone. These are not her only tattoos.

Rihanna prefers stars: there is a shooting star picture on her back and one small star on her ear. The singer is also fond of ethnic motives: the Maori pattern on her wrist, the Egyptian goddess Isis under her breast, and Nefertiti on her left side. Besides, there are significant lines in English, Arabic, and Sanskrit and the best friend’s date of birth.

In 2015, tabloids were full of information about Rihanna’s relationship with Leonardo DiCaprio: the couple appeared together frequently. As it turned out, Leonardo and Rihanna were just good friends while the singer was dating DiCaprio’s friend Richie Akiva, the owner of the network night clubs. Rihanna and Akiva met in the Caribbean where the young woman and Leonardo were celebrating New Year.

In 2016, the rumors about Rihanna’s new love affair were spreading: now it was the rapper Drake. The musicians appeared together in public and openly kissed in social events. Fans believed the couple would marry soon, but the relationship ended in six months.

In 2017, the singer debuted as a designer: she presented a sports clothes collection “Fenty x Puma” that she created with the international brand Puma.

In summer 2017, Rihanna took part in Paris LVMH Prize for Young Fashion Designers awarding ceremony. She surprised her fans with the changes in her appearance: she gained 15 kg. The singer did not comment on these changes. The rumors about Rihanna’s pregnancy were getting stronger.

Moreover, Rihanna changed her clothes style: instead of tight items of clothing, the singer started wearing loose-fitting dresses and oversize coats. Still, the new style did not make her less provocative: tight clothes were changed by plunging necklines and absence of underwear. This choice of clothes had resulted in some incidents; for instance, at the Louis Vitton ceremony, paparazzi took a picture of Rihanna’s naked breast.

Rihanna also wears sports costumes from her own collection which has been criticized by fans and fashion experts.

At the end of 2017, the singer’s fans were discussing the new photos that appeared on the Internet: Rihanna was kissing an unknown man in a swimming pool in a Spanish hotel. It took journalists just one day to identify Rihanna’s mysterious lover: it was Hassan Jameel, the Saudi Arabia billionaire and the owner of the main auto dealer company in the country.

As the press discovered, the singer was dating the businessman since spring 2017 and kept the new relationship in secret. Rihanna’s affair explained the sudden conflict with her friend, the supermodel Naomi Campbell: in spring, the women stopped communicating and unsubscribed from each other accounts in Instagram. Naomi is Hassan’s ex. The media guess that this is the reason of the friends’ abrupt quarrel. 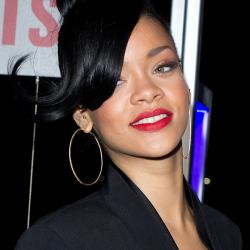