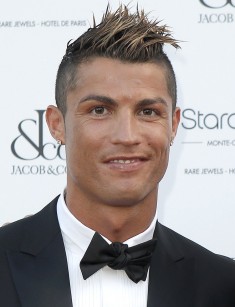 Cristiano Ronaldo is a Portuguese footballer. The striker plays for Spanish club Real Madrid and the Portuguese national team, which became the European champion in 2016.

The Portuguese has been successful in football since childhood. Already in his first matches for Manchester United Ronaldo’s goals delighted the fans at Old Trafford. The young talent received standing ovation. The professional biography of Cristiano Ronaldo shows that football for him is on the first place in his life. The list of personal achievements of the football player is rather huge. Probably, there is no one in the world who does not recognize the talent of this player.

Cristiano Ronaldo was born on February 5, 1985. The Portuguese footballer named after Ronald Reagan (40th US president) is the fourth child in the family. Cristiano has an elder brother Hugo and two sisters Elma and Liliana Katia. The athlete has warm memories from his childhood. Cristiano says that his parents did their best so their children have everything. In childhood the best gift for the boy was a ball. The child took the ball with him everywhere.

Since 8 years old Ronaldo played for "Andorinha" team, where the father of the future celebrity worked. Then Cristiano played at the local club "Nacional", and few years later he was already playing at the youth academy of the Lisbon "Sporting". In August 2001, the striker made his debut as a member of Sporting in the match against Lisbon “Athletico”. In this match Ronaldo replaced one of the players and scored a goal. At the same time the forward played for the Portuguese national team, participating in the European Youth Championship.

The main advantages of the Portuguese forward on the football field were his techniques, speed, and his comlexion (Cristiano’s height is 185 cm, weight is 80 kg). The results of the football player interested many coaches, who were the first to get a prospective striker.

When the guy was 18 years old the football club Manchester United came to Portugal for training. The team of Alex Ferguson lost the match against Lisbon "Sporting". Cristiano played an important role in this victory over the "Red Devils". It's no wonder that soon the footballer played for the English club. "Manchester United" paid for the forward £ 12.24 million.

Since 2003, Cristiano Ronaldo began to play for Manchester United. The guy immediately received the number 7 shirt which had previously been worn by such masters of the football world as Brian Robson, Eric Cantona, George Best and David Beckham. Realizing that he had such an honor, the football player did not disappoint the team and met all the expectations.

Representatives of "Manchester United" from the first matches understood that they made the right decision. Soon Ronaldo was recognized as the best young player of the year. The efforts of the Portuguese helped the "Red Devils" to win the English championship in 2007 and 2008.

Since 2008 the highest paid player of "Manchester United" has become the captain of the team. The first game as a captain was against "Bolton Wanderers". The Portuguese club became champion after that match. Before that, only George Best managed to score 32 goals at one season.

Then the player started playing for Spanish "Real". The Madrid club paid for Ronaldo £ 80 million. After that Ronaldo became the highest paid football player in the world.

After leaving the English club, Cristiano has spoken warmly of Manchester United coach Alex Ferguson, noted that he was grateful for his help in becoming a professional football player.

In 2009 Cristiano started playing for Real Madrid. The Portuguese scored his first goal for "Creamy" from the penalty spot in the match against Ecuadorian "LDU Quito". Then a series of successful matches followed and the football player set new club records. Football analysts note that Ronaldo has a very diverse style of playing. The forward is excellent at the position of attacking midfielder and central striker.

No matter which foot the football player uses in order to send the ball to the gate. These qualities helped Cristiano to become the top striker in 2012/13 season. By this time the player scored 200 goals in 197 games.

On September 30, 2015 Ronaldo scored his 500th goal, again becoming the club's best striker. The Portuguese managed to hit the opponents' gate 324 times in 308 games, breaking the record of legendary Raul, who scored 323 goals in 741 games. The video of Ronnie's goals (the nickname of Cristiano Ronaldo) today are gaining thousands of views on Internet.

A special attention should be given to the confrontation between Cristiano Ronaldo and the forward of Catalan "Barcelona" Lionel Messi. Matches between "Real" and "Barcelona" are called the battle of the two best players of modern football, because each "El-Clasico" collects millions of fans in front of their screens. The audience watches the game mainly because of the leaders of these Spanish grandees.

Ronaldo is a football star and has a really great personality. Fans are waiting for new matches with Cristiano Ronaldo, hoping to see interesting games, numerous goals and wins.

In 2016 Cristiano Ronaldo had new victories. As a part of the Portuguese national football team Cristiano became the champion of Europe. The final game against the French national team was the first in the last 10 years, when Cristiano was replaced on the football field. The fact is that the forward was injured and left the field on a stretcher. Among other things, this year brought the player the fourth "Golden Ball" (from 2010 to 2015 - "Golden Ball FIFA").

In 2016, the Spanish media reported that Cristiano Ronaldo leaves "Real". Nevertheless, this information was not confirmed, because in November 2016 Cristiano signed another contract with the Madrid club. According to the contract the player will play for the Spanish team for the next 5 years. In interviews the player noted that he is happy to wear the T-shirt of the best club in the world, as he thinks, and also would like to finish his sports career in "Real Madrid".

In 2016, the player signed an indefinite contract with Nike. The football player has advertised the boots of this American company not once. Some media suggest that the annual payments under this contract will not be less than the player's salary in the "Real".

$ 88 million is the income of Cristiano Ronaldo in 2016. According to the American magazine Forbes, the lion’s share was paid by Madrid "Real" and the Portuguese national team, as well as advertising profits.

The personal life of Cristiano Ronaldo is full of rumors and gossip. The media call the Portuguese football player a real Lovelace. Among women in whose company Ronaldo has been seen, Jordana Jardel, the youngest sister of football player Mario Jardel, was one of his girlfriends.

The Spanish model Nereid Gallardo is also one of Ronaldo’s admirers. The girl got acquainted with the mother of the football player, and also introduced him to her parents. Nevertheless, Cristiano and Nereida broke up soon, because of the Italian model Letizia Filippi, with whom Ronaldo began relations. Among Cristiano Ronaldo’s ex-girlfriends was even Paris Hilton-the American model and actress, producer, heiress and the owner of the Hilton hotels chain.

The press actively discussed the relationship between Cristiano Ronaldo and the Russian model Irina Sheik. Lovers were more than once recognized as the most beautiful couple; photographs of Cristiano and Irina were on the covers of hundreds of magazines. Fans of the couple were waiting for the logical conclusion of their story - the wedding, and Irina to become the wife of Cristiano Ronaldo. But in 2015 the model and the football player officially announced their breakup. In an interview, Irina said that the reason was Ronaldo’s affair.

In July 2010, Ronaldo reported the birth of his son. The name of Cristiano Jr.’s mother remains under strictest secrecy.

In 2015 the news that Cristiano Ronaldo is a gay was in all tabloids. The reason for this was a published photos of the football player with kick boxer Badr Hari. The media made such conclusions because of the fact that the player of "Real" visited Morocco several times, spending time with Badr Hari.

During the quarrel with the midfielder of Madrid "Atletico" Koke the striker of "Real" in anger called himself a homosexual. The phrase "I'm a gay, but I have a lot of money" made the situation even worth.

However, the fans are sure that there was another hype before "El Clasico" - the match between"Real" and "Barcelona". Whatever it was, but at the end of November 2016 Cristiano Ronaldo appeared in the company of the Spanish model Georgina Rodriguez, who is 10 years younger than the Portuguese. According to the rumors, the striker even managed to introduce his new girlfriend to the family.

In December 2015, Cristiano made a Christmas present to his fans - he made a tour of his house in a suburb of Madrid. The mansion of the football player is estimated at $ 7 million.

In 2017 it became known that the Spanish prosecutors had opened a criminal case against Cristiano Ronaldo. The Spanish forward was accused of tax evasion for $ 14.7 million. The authorities were sure that Ronaldo hid the real part of his income by using a special business structure for this.

In May, the information that the Portuguese decided to voluntarily pay € 6 million to avoid criminal prosecution appeared. Forward agreed to cooperate with representatives of the tax service, and also announced that he will fully pay off the debt.

It is assumed that the forward will pay the entire amount as an advance payment, which will lay the foundation for future with the investigation.

Despite the problems with the Spanish legislation, in June 2017 fans of the football player heard good news: Cristiano Ronaldo had children. The twins Matthew and Eve were born on June 8th from a surrogate mother. Soon the football player published a photo with his newborn children on Instagram.

On June 4, 2017 Cristiano surprised his fans, changing the image. Not even 24 hours after the victory of "Real Madrid " in the Champions League over Turin "Juventus", as Ronaldo appeared in public with a new haircut. Nevertheless, many fans did not support this decision of the idol, saying that the previous hairstyle was better.

In June 2017, Ronaldo visited Russia. Russian fans saw the game of Cristiano Ronaldo at the Confederations Cup 2017. In Kazan, where the match of the Portuguese national team against the Chilean national team took place, the fans met the famous footballer in special way. The forward of the Portuguese team said that he enjoyed being in the city and thanked for the hospitality.

In November 2017, it became known that Ronaldo became the father for the fourth time. Georgina gave birth to their daughter Alana-Martina.

Today the football player is the owner of numerous cups, awards and champion titles. Cristiano Ronaldo intends to further delight the fans with his game.

In 15 November 2018 Cristiano and Georgina are engaged.

“It was always going to be a particular night – and it wasn't only for the goals, but for the team as well”, Ronaldo told in one of the interviews. “This is the mentality of champions, this is the journey to follow. We enjoyed a magical night”. 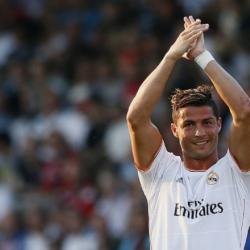