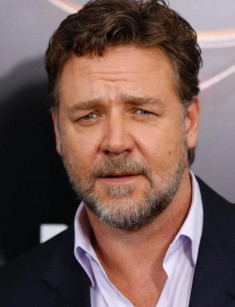 Russell Crowe is an Australian actor and director of New Zealand origin. The winner of the "Oscar" in 2001. Became famous after the films "Gladiator ", "3:10 to Yuma ", "A Beautiful Mind".

Russell Crow was born in the capital of New Zealand, Wellington. Alex and Jocelyn Crowe are the parents of the future movie star. Russell also has an elder brother, Terry. Four years after the birth of the youngest son, the family moved to Sydney, Australia. In Sydney, 5-year-old Russell Crowe for the first time participated in the episode of the television series "Spy Force", which was produced by the godfather of his mother.

In 1978, the family returned to New Zealand. His father with friends opened the restaurant "Flying Pitcher". The company did not bring high income. That is why Russell left school and tried to earn money in order to help the family.

For a long time, the young man dreamed of becoming a rock star. As a teenager,Russell organized a music band Russ Le Roc. Its title contained a pseudonym of the future celebrity. Later the young man created a successful collective the Roman Antix. Later it was transformed into 30 Odd Foot Of Grunts. The band performed until 2005. Most of their songs were written by Crowe himself. The band often toured and released six studio albums. The band didn’t become famous, but participation in the music band showed the multifaceted talent and creativity of Crowe.

For the first time, the young actor appeared on the screens in the program "The Rocky Horror Show." Russell appeared in 415 episodes of the show. Then the actor got the roles in the popular television series "Neighbors", "Living with the Law", "Acropolis Now", "Brides of Christ" and the films "Blood Oath", "Proof" and "Spotswood".

Russell played his first major role in the film "Crossroads". After that, Crowe participated in the Australian film "Romper Stomper," in which the directors tried to talk about skinheads and neo-Nazis. As a result, the film got negative reviews of critics but at the same time, the audience called the film one of the most interesting in Crow's career. The role of Hando in this film attracted the attention of the famous actress Sharon Stone, who invited Russell Crowe to Hollywood. In 1995, the western "The Quick and the Dead" was released. Then there was the fantastic action movie "Virtuosity", and in 1997, "L.A. Confidential". This psychological film brought Russell Crowe the first Oscar nomination.

After such a success, the actor got a lot of proposals. But the following films cannot be called successful. In 1999, the film "The Insider", where Crowe starred along with Al Pacino, was released. It got positive reviews. A year later, Russell Crowe again made the whole world speak of his personality. The Australian starred in the colorful historical film "Gladiator." The actor played the main role - the Roman commander Maximus, who had a difficult life. The film was enthusiastically received by the audience, and Crowe received the long-awaited Oscar.

Then the actor appeared in the biographical film "A Beautiful Mind", which tells about the mathematician, John Forbes Nash. It brought to the actor the Golden Globe Award, the US Screen Actors Guild Award, the British Academy of Film and Television Arts Award, and the next Oscar nomination.

Subsequently, Crowe played more than 20 roles. The most notable and interesting films in Crow's career are the action movie "Body of Lies" released in 2008, the adaptation of the legend "Robin Hood" released in 2010, the screen version of Victor Hugo's book the musical “Les Miserables”, the crime drama "Broken City" released in 2013 and the epic movie "Noah".

Also in 2015, Russell starred in the military drama "The Water Diviner", in which the actor not only plays the main role but also tries himself as a director. The film received just three awards from the Australian film institute.

The historical film "Gladiator" was a turning point in the creative biography of Russell Crowe. In this film, the actor played General Maximus, the commander of the Roman legions in Germany.

The film tells about the era of Emperor Marcus Aurelius, who in 180 AD continues the war against the German tribes. The Hispanic-Roman Maximus Decimus Meridius commands the garrison near Vindobona, trying to attack the enemies from the north. After the victorious battle, the death of the emperor and betrayal of his comrades-in-arms, the general went to his family in Italy. The commander learns that the future Roman Emperor Commodus, the son of Marcus Aurelius, killed his family, who lived in the Italian village.

Further Maximus participates in gladiatorial battles. When Commodus received the news that his father's favorite commander was still alive, he was furious. The Emperor is trying in every way to kill the general, who can overthrow him in the name of truth and justice.

Russell Crowe always had the reputation of a brutal heartbreaker. It is known that even Sharon Stone and Jodie Foster, the famous representatives of Hollywood, were attracted by him. And Meg Ryan in order to be with Crowe, whom she met on the set of the film "Proof of Life", divorced her husband.

Russell Crowe was married only once. In 2003, the Australian married Danielle Spencer, whom he knew for almost 13 years. The couple had two sons - Charles Spencer-Crowe and Tennyson Spencer-Crowe. But in 2012 the couple divorced. Children live with their mother, and the actor lives in Australia.

Crowe owns a huge farm. The actor calls the animals "my loyal friends." Terry Crowe, the brother of the actor, is responsible for the business on the farm. The parents of the Hollywood celebrity also live there.

Russell Crowe continues to actively star in the films. The comedy "The Nice Guys" is the last actor's work. In 2017, the film "The Mummy" will be released, in which the Australian played Dr. Henry Jekyll.

In the film, Russell Crowe works with Tom Cruise. In the American media, there is information that there are constant conflicts between the Hollywood actors and the film crew confirms this. Also, the actress Annabelle Wallis, who stars in the fantasy-action movie, published a photo, in which two actors look at each other with hatred.

Users of social networks suggest the reasons for the possible conflict. Russell Crowe is a close friend of Nicole Kidman. When Tom Cruise and Nicole Kidman broke up, the Australian not only broke off contact with the American but openly demonstrates his contempt. Crowe, known for his straightforwardness, constantly shows Cruz that he is not going to forgive his attitude towards Nicole. 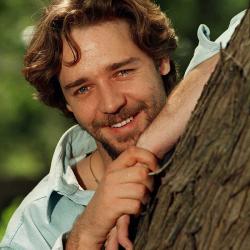