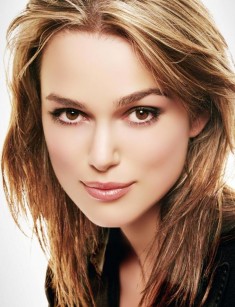 Keira Knightley is a British actress. She was nominated for Oscar twice. Keira Christina Knightley was born in London in March 1985. Her parent made a deal. Sharman MacDonald, Keira's mother, dreamed about the career of an actress, and in her free time at the theater, she wrote plays. But the acting career of the woman wasn’t successful. Good roles were offered not often. Then Sharman argued with her husband-actor that in case of greater success in drama, the woman will give birth to their second child. Soon, the London Theater accepted MacDonald’s play, but Sharman didn’t become a good actress. Keira’s father named his daughter after the beloved Russian figure skater Kira Ivanova.

Knightley was a good pupil. This was her parents’ condition when little Keira asked them to find an agent. The future Hollywood star kept her word, began to bring home only good marks. Although, it was difficult for the girl to study at school because Keira Knightley was diagnosed with "dyslexia." In order to learn how to read and write without problems, she made a lot of efforts.

Already at 11 years in the portfolio of the young London actress, there were several roles in mini-series and shows that broadcast European channels. In the movie "Coming Home", the actress played along with famous Peter O'Toole.

The actress's resemblance to the famous Natalie Portman helped Knightley to get roles. In the movie "Star Wars: Episode I - The Phantom Menace", released in 1999, Keira replaced Natalie. The audience even didn’t notice this. Even today people also think that Portman played two roles - Padmé Amidala and her doppelganger Sabe.

In 1999 and 200, Keira Knightley played her first two serious roles in the cinema. The actress appeared in the popular TV series "Oliver Twist" and in the film "The hole". These roles did not bring Keira fame, but she was noticed by the directors. In 2001, Knightley starred in the movie "Princess of Thieves ", and the next year she played a teenager in the film "Bend It Like Beckham." After the release of these two movies, the London actress woke up famous. And the last film also brought a good income. The actress collected at the box office almost $ 80 million, exceeding the invested money.

In 2002, Knightley tried to continue her education and went to college. The girl dreamed of studying classical literature and English history, but with her employment and a large number of contracts, it was impossible. So she left her studies.

In 2003, the actress appeared in "Pirates of the Caribbean" along with Johnny Depp and Orlando Bloom. This film, along with the film "King Arthur" is the most famous. These roles were really successful, and the photo of Keira appeared on the covers of the world's leading magazines. With the release of the movie "Pirates of the Caribbean" Knightley climbed Hollywood Olympus. A little bit later, the actress starred in the sequels of the popular film, which collected more than $ 1.5 billion at the box office. This film brought Knightley 3 awards at once.

From 2007 to 2012, the actress appeared in the top ten popular films such as "Pride and Prejudice", "Forbidden Love" and "A Dangerous Method." Also, the actress's starred in the film "Atonement" along with the British actor James McAvoy. For her work in the last film, Keira Knightley was nominated for "Best Drama Actress".

In September 2012, the film "Anna Karenina" was released. Keira starred along with Jude Law. In 2014, Knightley appeared in the drama-action movie "Jack Ryan: Shadow Recruit" and in the historical film "The Imitation Game."

In 2015, the movie "Candy Store" was released, where Keira appeared in the title role with Robert De Niro.

The relations of the actress have always been under the watchful eye of the press. Knightley met the actor Jamie Dornan on the set of the film "The Jacket". This relationship lasted 2 years. Dornan and Knightley broke up in early autumn 2005. In the same year, Keira began relations with Rupert Friend. The couple was dating for a long time. They spent their free time in the Bahamas. But in December 2010, the couple broke up.

In 2016, a video appeared in which Keira Knightley named her favorite dish and melody. The actress told about her favorite things in the advertising campaign for the line of quilted jewelry of the Chanel Crush collection.

The favorite food actress is spaghetti Bolognese, the favorite melody is the sound of wind in the crowns of trees, the brand - Chanel.

Also in 2016, Keira Knightley appeared in an elegant photo session for Harper's Bazaar. The British actress became the main heroine of the British Harper's Bazaar. In the new issue of fashion gloss, the actress will appear in a romantic image from Chanel, which she represents for several years. The new photos were highly appreciated by the fans of the actress.

In 2017, Keira starred for the advertising campaign of the perfume Chanel Coco Mademoiselle 2017. The actress is not for the first time collaborating with the famous French brand. This advertising has become popular on the web.

This time the celebrity is depicted nude in a bathtub, which is filled with perfume boxes. Also, the girl is posing in a black dress on the background of the shelves with Chanel bottles.

According to the actress, after the birth of the child, her body became completely different.

"I thought that I would strive to return the form more quickly after childbirth but, to my great surprise, everything was exactly the opposite. After the birth of the child, I thought - I will not become a victim of pressure and criticism. I'm in no hurry and I have other goals and not think about my appearance, "Knightley said in an interview.

Her Instagram followers continue to pay attention to her physical form (height of Keira is 170 cm, weight is 54 kg).

The actress continues to participate in the shooting of feature films. The American press reported that the British starred in the fifth part of the film, which is called "Pirates of the Caribbean: Dead Men Tell No Tales."

• Pirates of the Caribbean

• Pirates of the Caribbean: At World's End 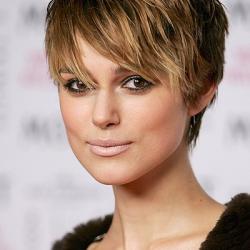