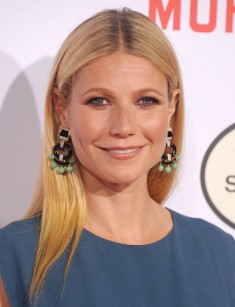 Gwyneth Paltrow is a Hollywood actress. She became famous after starring in melodramas. Gwyneth Paltrow also played the role of a businesswoman in the science fiction film "Iron Man", based on the story of the superhero of the publishing house "Marvel". The heroine of the actress is a business partner of the main actor as well as a girlfriend of the Iron Man.

The film "Shakespeare in Love" brought the actress professional recognition. Paltrow won Oscar and Golden Globe awards for the main female role in this film.

Gwyneth Paltrow was born in Los Angeles. Her father, Bruce Paltrow, is a film producer. And her mother, Blythe Danner, is a popular actress. Also, Gwyneth has a younger brother, Jake, a famous director. There are other famous relatives in the family. For example, the cousin of Gwyneth and Jake, the actress Katherine Moennig. She appeared in many television series. And their second cousin Gabrielle Giffords, the member of the US Congress. The godfather of Gwyneth Paltrow is a famous filmmaker and producer Steven Spielberg.

Gwyneth spent her childhood in Santa Monica, California. When she was 11 years old, the family moved to New York, where her mother was offered an interesting job in one of the theaters. In this city, she graduated from a specialized school for girls. As a teenager, Gwyneth often attended performances of her mother and even took part in them twice. For the first time, she participated in the play "The Adventures of Huckleberry Finn" based on the famous classic novel by Mark Twain.

After receiving the diploma, Gwyneth returned to Santa Monica and entered the University of California in Santa Barbara. She chose the faculty of art history but did not finish her studies. She chose the career of a film actress.

For the first time, Gwyneth Paltrow appeared on the screens playing Rebecca in the film "Scream" starring John Travolta. In the same year, she starred in adventure feature “Hook” about the grown-up heroes of the story about Peter Pen. Gwyneth got the role of Wendy.

Then there were little roles in the thriller "Malice", the biography of the writer Dorothy Parker "Mrs. Parker and the Vicious Circle", the historical drama "Jefferson in Paris", the famous psychological thriller "Seven." Gwyneth got the role in the drama "Sydney", where she played a waitress who worked as a prostitute. Also, the actress appeared in the romantic comedy "The Pallbearer ", in which she played the role of Julie DeMarco - the “headache” of the main actor.

In 1996, the actress got her first big role. In the film adaptation of the famous novel by Jane Austen "Emma", Gwyneth Paltrow played the main role. For this film, Paltrow won the Satellite Award for the best female role in the comedy film.

After such a successful role, the actress played in the romantic fantasy drama "Sliding Doors", the screen version of the novel by Charles Dickens "Great Expectations", the thriller "Hush" and the remake of Alfred Hitchcock's film "Dial M for Murder ". And the next two films made it possible for Gwyneth to stand in line with the brightest stars of Hollywood. The film "The Talented Mr. Ripley" got a lot of positive reviews from film critics. And the main female role in the tragicomedy "Shakespeare in Love" brought her "Oscar" for Best Actress. In addition, she received the Golden Globe and The Screen Actors Guild award. In the new millennium, the actress began to choose roles only in melodramas and romantic comedies, such as "The Royal Tenenbaums ", "Shallow Hal", "Bounce", "Whiplash ", "Proof", "The Good Night" and many others. Most of these films were commercial projects, and Gwyneth does not hide that she chose them for money.

In 2003, the actress appeared in the comedy "View from the Top", where she played the role of a girl who dreams of becoming a flight attendant. In 2006, on the wave of popularity of the films based on comic books, appeared "Iron Man", where Gwyneth played the role of Pepper Potts, the assistant of the main character. The film became successful, and in 2010 and 2013 2 continuations were released. The role of Paltrow is secondary in these films. Nevertheless, Pepper Potts was showed as an interesting heroine.

At the beginning, the girl worked as a secretary and then became the director of the company ruled the corporation independently. Pepper Potts was a girlfriend of Tony Stark. Later they broke up but remained friends. The girl was in a hostage situation, experienced dangerous experiments and even was a superheroine.

There were difficulties during filming because Paltrow is higher than Robert Downey Jr., who played the billionaire Tony Stark and became a superhero - Iron Man. Gwyneth Paltrow, even without heels is higher than the actor (the growth of the actress is 175 cm, and Robert is 174 cm). Pepper Potts is a businesswoman and prefers the official style of clothing, Paltrow appeared on high heels in the film.

According to the book, Stark is higher than his assistant. Robert Downey, Jr. stands on platforms, wear shoes on a hidden platform. The directors also used different visual effects.

In 2012, the actress again appeared in this role in the superhero film "The Avengers". Among other works, it is worth noting the musical television series "Glee", in which the actress played the role of Holly Holiday.

For this role, Gwyneth won the Emmy Award as the best guest actress. For an excellent game in the romantic drama "The Affair", she was nominated for the Independent Spirit Award. And in the film "Country Strong" she sang few songs for the soundtrack.

In 2015, the film "Mortdecai" with Gwyneth Paltrow was released. It is based on the novels by Kyril Bonfiglioli.

Paltrow played along with Johnny Depp, who played the role of Charles Mortdecai, a crook, art expert and her husband. However, at the box office, this film failed and received many negative reviews from film critics.

Gwyneth Paltrow had relations with the American actor Robert Sean Leonard in the early 90's. In 1994, Gwyneth met Brad Pitt, and the couple had a long-term relationship. They even announced their engagement but 3 years later the couple broke up. Gwyneth told in an interview that she regretted it. Also, she had 3-years-relationship with the actor and director Ben Affleck.

In 2002, the actress met the musician Chris Martin. They were dating for about a year, then in December 2003 they got married. In this marriage, their daughter Apple and a son Moses was born. Gwyneth and Chris lived together for 10 years, but in the spring of 2015, they officially divorced.

Almost immediately Gwyneth began relations with the TV producer Brad Falchuk. They met on the set of the TV series "Glee".

Gwyneth performed several times as a singer, recording songs for films with her participation. For the first time, she recorded the single "Cruisin" in a duet with Huey Lewis for the movie "Duets". The song even topped the Australian hit parade. And in the film "Country Strong" she sang 4 songs: Country Strong, Shake That Thing, Coming Home and Me and Tennessee. In addition, she recorded the song along with the American singer Sheryl Crow “It's Only Love”.

Since 2005, Gwyneth Paltrow became the face of Estée Lauder's Pleasures perfume. The actress has an official account on Instagram with 3.4 million followers.

In 2016, the actress again played the role of Pepper Potts in the film "Captain America: Civil War," which tells about the split of the team because of political and ideological differences.

The film received positive reviews. According to the film critics, the plot of the film is its main advantage. It shows the characters, as well as not typical for action movies the conflict between good and evil and shows a clash of concepts of freedom and security. The film offers the audiences to choose the side, as both teams of Avengers remain superheroes and they are not shown in the film as bad guys.

In 2017 there were rumors that Paltrow plans a wedding with Brad Falchuk.

In April 2017, the actress announced that she was going to launch a new glossy magazine “Goop”. The magazine is based on the already existing Gwyneth’s website. Paltrow plans to create a printed version with the editor of the American "Vogue" Anna Wintour. 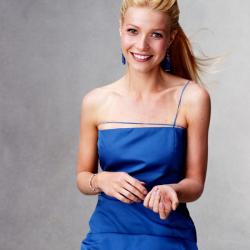