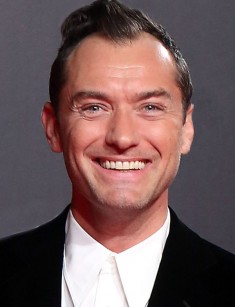 Jude Law became a Hollywood star after the release of such films as "The Talented Mr. Ripley", "Cold Mountain", "Closer" and "Sherlock Holmes". This talented actor got two nominations for "Oscar" and three for "Golden Globe".

Jude Law was born in December 1972, in London. His father, Peter Law, worked as a teacher at school. And his mother, Maggie, worked as an English teacher. David Jude Heyworth was the second child in the family. He also has an elder sister Natasha.

The parents of Jude Law loved theater and did not miss a single premiere. At the age of six, the boy debuted on the stage. He played a small role in the children's play, and at the age of 12, he got to the troupe of the National Youth Music Theatre.

Until the age of 14, the boy went to a regular school. But Jude’s classmates made fun of him. And his parents sent their son to a private school. The peers didn’t like the young Jude for his appearance: blue eyes, linen hair and bright lips. He looked like an angel but teenagers considered his face "girlish".

When Jude Law was 14, he starred in the film for the first time- he was invited to play a small role in the sketch of the program for teenagers "Pocket Money." And when the guy was 17 he played a groom in the film "The Tailor of Gloucester". A successful debut pushed the young boy to leave school and work as an actor. Moreover, Jude was offered the role of a teenager Nathan in the popular TV series "Families."

Jude Law’s creative biography developed very fast: the young actor appeared in the series and at the same time continued to play at the stage. He appeared in the play “Pygmalion” and even went on his first tour to Italy.

In 1991, the 19-year-old actor appeared on the screens once again. He starred in an episode of the television series about Sherlock Holmes. At the same time, Jude Law debuted on the stage of one of the London theaters and played in "The Fastest Clock in the Universe". The play was recognized as the best theatre premiere in 1992, and all the actors were in the center of attention of critics and theatergoers.

Two years later, Law got the main role in the thriller "Shopping" by Paul Anderson. However, this film failed at the box office. But Jude’s acting skills increased greatly and now he could be proud of the first main role in his filmography.

But Jude Law succeeded in the theater. He appeared in such plays as "Death of a Salesman" and "The Snow Orchid". In the tragicomedy "Les Parents terribles", the young actor appeared naked. It was a rather scandalous role which brought the actor a nomination for the prestigious Lawrence Olivier award.

In 1995, the actor got a lot of prestigious awards. For the role in the play "Indiscretion" Jude Law was nominated for Tony Award as well as for Ian Charleson Award. It is noteworthy that the British play was shown on Broadway. The partner of Jude Law was the famous actress Kathleen Turner.

The actor also got successful roles in cinema. He starred in the melodrama "I Love You, I Love You Not" and the drama "Bent", which described the persecution of homosexuals in Nazi Germany.

After these films, Jude Law was noticed by famous directors. The actor was invited to the biographical drama "Wilde", which was released in 1997. Jude played the lover of Oscar Wilde - Lord Alfred Douglas. The role of the writer played the famous British actor Stephen Fry. The drama brought the young actor fame and recognition in the world of cinema.

In 1997, Jude Law decided to create a film company that worked almost seven years. The founders of the company, except for Jude and his wife Sadie Frost, were his British colleagues, Ewan McGregor and Sean Pertwee. The film company produced such popular films as "Existenz", "Owning Mahowny" and "Sky Captain and the World of Tomorrow".

Success in his native Britain opened the door to Hollywood: in a short period, Jude Law appeared in several films. In the fantastic thriller "Gattaca" he played the role of a paralyzed invalid, Jerome Morrow. In this film, the famous Hollywood stars Uma Thurman and Ethan Hawke also starred. It is noteworthy that the film got positive reviews from critics but the viewers did not like it and "Gattaca" failed at the box office.

Jude Low became famous in Hollywood after starring in the criminal melodrama "Midnight in the Garden of Good and Evil" by Clint Eastwood and the romantic comedy "Music from Another Room". These films were released in the 1990s and brought the actor recognition in Hollywood.

1999 became very successful for the British star. He starred in the psychological thriller by Anthony Minghella "TheTalented Mr. Ripley", in which Jude Law played the role of Greenleaf. The main character of the film Tom Ripley got Matt Damon. Another main role went to the young actress Gwyneth Paltrow. Arrogant but at the same time incredibly attractive Dickie Greenleaf( Law) won the hearts of the American viewers. The film turned into a bestseller and collected at the box office more than $ 80 million. Jude Law was nominated for Oscar and Golden Globe Awards.

Jude's triumph brought him to the top of the world's cinematography. From this moment he appeared only in projects that strengthened him in the status of a Hollywood star. In 2001, the film "A.I. Artificial Intelligence" was released, for which Jude Law was nominated for the second Golden Globe. The drama by Anthony Minghella "Cold Mountain” was released in 2003 and brought the British second nomination for Oscar as well as the nominations for the Golden Globe and BAFTA.

The films "The Aviator", "Alfie", "Closer", "All the King's Men", "The Holiday" and "My Blueberry Nights" were not less successful. In the psychological drama "Closer" by Mike Nichols, Jude Law played along with Julia Roberts, Natalie Portman, and Clive Owen.

In 2011, Jude Law got a small role in the Oscar-winning film by the legendary Martin Scorsese “Hugo", and in 2012, he starred in a new adaptation “Anna Karenina” by Joe Wright. The British played the role of Alexey Karenin, and his wife Anna was played by the brilliant Keira Knightley. The world premiere took place in the autumn of 2012, and in Russia, the drama was released in January 2013.

Among the successful films of this period, in which the irresistible Jude Law appeared, were "Side effects", "Dom Hemingway" and "Spy".

In 2014, the British star delighted his fans with the appearance in the adventure thriller "Black Sea" by Kevin Macdonald, in which he starred along with Russian stars Grigoriy Dobrygin and Konstantin Khabensky.

2016 was also full of surprises for the multimillion army of fans of the Hollywood celebrity. The viewers saw their favorite actor in the role of the Pope in the series by Paolo Sorrentino "The Young Pope". Law starred along with Diane Keaton and Silvio Orlando. In 2016 there was a premiere of the drama by Michael Grandage "Genius", in which Jude Law, Colin Firth, and Nicole Kidman played the main roles.

In 2017, Jude Law will again appear on the screens in a new project, which promises to bring another portion of glory to both its creators and actors of the film. This is an adventure film by Guy Ritchie "King Arthur: Legend of the Sword”. Charlie Hunnam will play King Arthur, and the blue-eyed British star will appear in the image of the Celtic King Vortigern. In Russia, the premiere is scheduled for mid-May 2017.

On the set of the film "Shopping", Jude Law met his future wife Sadie Frost. The couple has a son Rafferty and a daughter Iris. The actress, known for the role of Lucy in the film "Dracula" by Coppola, became a housewife and her husband's career was rapidly developing. Jude had no time for the family because he starred in films. The rumors about the relations with Nicole Kidman put an end to their marriage. The couple broke up in 2003 despite the appearance of the third child - the son Rudy.

The blue-eyed handsome man wasn’t alone. After the divorce, he began relations with Sienna Miller. But the well-known actress accused the lover of betrayal, telling reporters that Jude Law had relations with a nanny his children.

The British actor began dating the model Samantha Burke. In 2009, the woman gave birth to their daughter Sofia. A few months later, Sienna Miller and Jude Law were together again. Their relations lasted only a year and in early 2011 they finally broke up.

In the spring of 2014, Jude Law was again in the top of the Hollywood news: he began dating with the beginning singer Catherine Harding, who is 18 years younger than him. The couple met in London, and then they went to the Czech Republic together, where Law starred in the film "Spy". But with the end of the film, their relations also ended. In March 2015, Harding gave birth to their daughter. The couple does not plan to begin the relationship once again.

It seems that women inspire the Hollywood heartbreaker. Not so long ago, there appeared information that Jude Law was dating a 29-year-old psychologist Philippa Cohen. The photographers noticed the couple when they got into the car. They say that the actor is again in love.

It is known that Jude Law loves football and is a longtime fan of the "Tottenham" FC. And he does not forget about his children from previous marriages and is proud of their successes. His daughter, Iris Law, became the face of the advertising campaign of the English brand Illustrated People. Earlier it was reported that Rafferty Law made the first successful steps in the modeling business.

On the Instagram, there are a lot of photos of Iris with her dad. The girl often posts old family pictures. 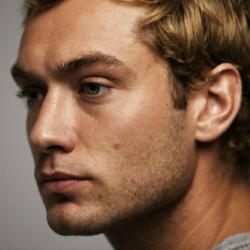