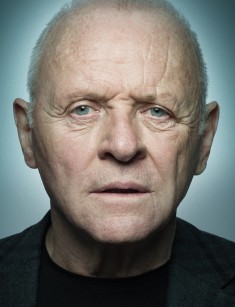 Anthony Hopkins is a British movie and drama actor. Hopkins became popular because of his eccentric personage - Hannibal Lecter, to the role of which he returned in three thrillers. Anthony Hopkins turned into the character of the cannibalistic serial killer - doctor Hannibal Lecter. In this role, the actor appeared in the movies "The Silence of the Lambs", "Hannibal" and "Red Dragon".

Anthony Hopkins was born in Wales, in the small town of Margam. His parents Richard Arthur and Annie Muriel were bakers and had their own bakery.

In the beginning, Anthony was at homeschooling, but when he was twelve years old, his parents insisted he attend the best private school of Wales "Jones' West Monmouth Boy's School", which situated in Pontypool. Young Hopkins managed to remain here for 2,5 years. His congenital dyslexia didn't let him catch up with the other pupils. At that time the boy made the right conclusions, that it would be much easier and more useful for him to choose a creative profession.

At first, he was focused on music and fine arts, because he could paint and play the piano very well. In 1952 Anthony Hopkins fell into company with Richard Burton, who was a rather popular actor at this time. It was he, who convinced the young man, that it was quite possible for him to make the successful career of the actor.

Anthony took the advice of his elder fellow and entered the Royal Welsh College of Music& Drama and in 1957 he finished it with distinction. After the college, he spent a couple of years doing his national service at the Armed Forces of Great Britain. After demobilization Hopkins moved to London and entered the Royal Academy of Dramatic Art.

Having received the diploma of the professional drama actor, Anthony Hopkins played on the stage of the small London theater and beginning from 1965 came on the stage of the Royal National Theater. Here he became an understudy of the famous actor Lawrence Olivier. Hopkins stayed at this theater troupe until 1970, and the most famous play, in which he took part, was a piece "The Dance to Death", produced by August Strindberg.

Playing on the stage of the Royal National Theater, Hopkins played in the episodes of the following movies: "A Flea in Her Ear", "The White Bus", "The Looking Glass War", "The Lion in Winter" and others.

In early 70-s the actor moved to the USA and at once he played the major part in the criminal action movie "When Eight Bells Toll". Then he played the character of Pierre Bezuhov in the TV series "War and peace", for which he received the British Academy of Film and Television Arts Awards.

Also he took part in such famous movies, as the drama "A Doll's House", the thriller "Audrey Rose", drama "The Dawning", the mystic thriller "Magic", the drama "The Elephant Man", thriller "Desperate Hours", the drama "The Good Father" and the melodrama "Charing Cross Road 84". For his roles in the biographical movies "The Lindbergh Kidnapping Case" and "the Bunker" Anthony Hopkins received two Emmy Awards.

The actor became really successful and world-famous at early 90-s when he played a cannibalic serial killer Hannibal Lecter in the hot thriller "The Silence of the Lambs". For his role in this movie, Anthony Hopkins received the most desired actors' awards - Oscar's statuette for the Best Actor in a leading role. Then he was three times more nominated for Academic Awards for his roles in the melodrama "The Remains of the day", biographical drama "Nixon" and historical movie "Amistad".

Except for these movies, Hopkins took part in a great number of other popular movies. The most markable of them are - the horror "Bram Stocker's Dracula", drama "Legends of the Fall", the thriller "The Edge" featuring Alec Baldwin and Elle Macpherson as his partners. And the major part of this movie was played by the trained bear Bart.

In 1998 Anthony Hopkins and Brad Pitt took major parts in the mystic drama about life and death "Meet Joe Black", whereby the Death in this allegorical movie came herself in person of the young man.

Also, there were other significant movies in Hopkins' career: the adventure movie "The Mask of Zorro", the thriller "Hearts in Atlantis", the horror film "The Wolfman" , the drama "Shadowlands", the fantasy "Thor", the biography film "Hitchcock", the melodrama "The Human Stain", the dramatic thriller "Instinct".

Also after the extremely popular movie "The Silence of the Lambs" two sequels came on screen – in 2001 "Hannibal", and a year later "Red Dragon".

In 2007 the fans saw Hopkins in the leading part in the criminal drama "Fracture", in which the actor appeared in his usual role of the creepy killer.

In 2001 Hopkins played the part of the priest in the thriller "The Rite" about exorcism.

In 2014 Hopkins took the major role in the detective thriller "Solace", which narrated about the confrontation of the of the maniac and the detective with paranormal powers. The actor also was the producer of this movie.

Anthony Hopkins not only received the awards for some definite roles. He was marked with the special awards of the British Academy of Film and Television Arts in 1995 and was awarded with the Golden Globe in 2006 for his contribution to cinematography. In 1991 Queen Elizabeth graced Hopkins with the dignity of Knight Bachelor, after this, he should be called Sir Anthony Hopkins.

Also, in 2015 the fans of Anthony Hopkins figured out his musical talent. His musical piece "And the waltz goes on", composed half a century, ago was performed by the musician Andre Rie. All the web was excited by the concert video, the audience gave a very positive feedback for the composing talent of Hopkins.

For the first time, Anthony Hopkins got married to the Norwegian actress Petronella Barker in 1967. A year later his wife gave birth to their daughter Abigail. They lived together for 5 years.

Right after the actor had divorced he married for the second time his secretary Jennifer Linton. In 1995 the couple separated for a year, then they continued their relationship, but after three years they finally separated. Though, they officially divorced only in 2002.

After separation with Jennifer Linton, Anthony Hopkins got acquainted with Joyce Ingalls at Alcoholic Anonymous. They dated each other during 2 tears. Later, he had a fling with Francine Kay.

In 2003 Hopkins married a Columbian actress Stella Arroyave. The couple lives at their villa in Malibu, California.

A new dramatic thriller "Misconduct" came on the screen on 6 of February, 2016. Hopkins played the leading role in this movie.

In September 2016, the German - British movie "Collide" was premiered at the American film festival in Dogville. Anthony Hopkins took part in this movie.

In 2016 Anthony Hopkins played the leading role in the American science - fiction series "Westworld". This TV series became the screen-adaptation of the movie "Westworld", shot by Michael Crichton in 1973.

The plot takes place in the future, in the amusement park, where the androids imitate the life of the citizens of the Wild West of the 19th century. The androids are indistinguishable from humans, they talk and move easily, but they can't do any harm to the visitors and they have a pre-defined set of narratives each day, which they can't interfere with. Such conditions allow people demonstrate their cruelty and amorality, which is criticized in the society.

Thus, the movie raises social and psychological problems of the humanity.

Anthony Hopkins played the role of the creator and creative director of the park. The leading roles of the androids were performed by Evan Rachel Wood and Thandie Newton.

The TV series one the popularity of the audience in a short time and HBO announced the sequel for the second season.

On the 23-rd of June 2017 the franchise of the science - fiction action movie "Transformers: The Last Knight" was premiered. Hopkins performed the role of Sir Edmund Burton, the alliance member, who was trying to save the world in the movie.

In 2017, Anthony Hopkins returned to the character of Asgard Odin in the blockbuster, based on the Marvel Comics "Thor: Ragnarok". 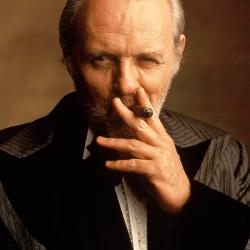