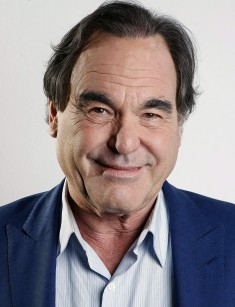 Oliver Stone is an American film director, scriptwriter, and producer, most known for his pictures "Platoon", "Born on the Fourth of July", "JFK ", "Oliver Stone's Untold History of the United States" and many others. Stone had received a great number of cinema awards for his movies, including three Academic Awards.

The director was born in New York in a family of the military economist Luís Stone and his spouse Jacqueline Goddet. Oliver's mother was a French woman whom her father brought from Europe after the World War II. Luís was a Jew, and initially, his surname sounded as Silverstein, and the man аmericanized it when he had been studying at Yale University. Later parents of the future director divorced, his mother returned to France, and the boy stayed on the education of his father.

Oliver graduated from Evangelical school, then he was studying at Humanitarian College in Pennsylvania. He decided to receive higher education and for this purpose, he returned to his native town of New York. Then from approval of his father, Oliver became the student of Yale University. However, a young actor was not very successful at Yale University. He gave up his studies and went to Southern Vietnam as a volunteer teacher of English. In a year Stone came back to the U.S., worked for some time in Oregon and then he left again – to Mexico.

When Oliver Stone turned 21 he was conscripted into the army. His service coincided with the Vietnam war, and during a year he participated in military operations in this Asian country. The young man was injured twice during the battle and he even received several Awards of Honour for his courage. After demobilization Oliver entered New York University on Direction faculty where he had been learning from the famous expert Martin Scorsese.

The short autobiographical movie "Last Year in Viet Nam" was the first work of Oliver Stone as director. Then Stone had shot a number of low budget films, the most famous of which was a psychological thriller "The Hand". At first, Oliver had been recognized as a scriptwriter of a fantasy "Conan the Barbarian" with Arnold Schwarzenegger, action movie "Year of the Dragon" with Mickey Rourke and a crime drama "Scarface" with Al Pacino.

But the director became truly world famous after he had shot "The Vietnamese trilogy". Three pictures about the war of the end of the 60-s years are included in this work: "Platoon", "Born on the Fourth of July" and "Heaven & Earth". The director received Academic Awards for the first two pictures and was recognized as one of the greatest experts in the art of demonstration of war realism.

Biographical film-research "JFK" became one more shocking tape, in which Stone disproves official interpretation of the president’s assassination and support appeals in favor of another point of view. The picture was like a bombshell at the American movie market.

Also, there is a number of documentary political works in Oliver’s filmography. Stone devoted several movies to the Cuban leader Fidel Castro - "Comandante", "Looking for Fidel" and "Castro in the Winter". Moreover, Oliver Stone showed the life of the Venezuelan president Hugo Chávez in the film "My Friend Hugo". Besides, the director was interested in the military conflicts in different parts of the planet. To this subject, there were movies "South of the Border" about the conflict in Latin America, "Persona Non-Grata" about the Palestinian-Israeli conflict, "Ukraine on Fire" about the revolution in Kiev in 2014.

In November 2014 the director announced for the first time that he was going to interview the President of Russia to show to Americans a real personality of Putin. According to Stone, the new project was started so that Americans could hear those words which they don't want to hear.

Oliver also didn't refuse to direct feature movies. It’s worth mentioning some of his most popular movies – the historical movie "Alexander" with Colin Farrell and Angelina Jolie, the drama "Wall Street: Money never sleeps" with Michael Douglas and Charlie Sheen and also the premiere of 2016, the thriller "Snowden" where Joseph Gordon-Levitt appeared in the leading role.

In 2016 Oliver Stone and Peter Kuznick published the eponymous book based on documentary series "Oliver Stone's Untold History of the United States".

For his incomplete 70 years, Oliver Stone was married three times and has three children. A beautiful woman of the Lebanese origin Najwa Sarkis became Stone’s first spouse. It was possible to say that their relationship was ideal, but their marriage was obscured by the fact that spouses couldn’t have children because of incompatibility between them. In six years they divorced.

The second wife, the actress Elizabeth Stone, made him happy with paternity, giving birth to two his children. Two of their sons Sean Christopher and Michael Jack were born with a difference in 7 years. The second family of the director had been existing for 12 years, but this union had lasted with the divorce.

Currently, Oliver Stone is happily married to the Korean Sun-Jung Jung with whom they have been together for two decades. They have a daughter Tara, who was born a year after the wedding.

Director’s attitude towards religions is rather complicated. In spite of the fact that Stone's father was Jewish, therefore, the Jew, and his mother was Catholic, Oliver had been studying at Protestant school. Stone wasn't captured by Christianity and during long time director considered himself the atheist. But later the man became a Buddhist, and in 2012 he again changed his religion and converted to Shiite Islam and even took himself a religious name of Ali.

In June 2017 Oliver Stone presented the documentary "Putin's Interviews" which was based on 27 hours of video interviews with the Russian president which the director had been shooting for two years. The result of shootings had been reduced to the broadcasting time of four mini-series. The series of the picture "Putin's Interviews" were shown daily on June 12-15, 2017 at the American TV channel "Showtime". The premiere of a documentary picture took place in Russia on June 19-22.

By the words of Oliver Stone, he shot this picture to show the inhabitants of the USA and other countries the truth. The director complains that the American mass media doesn't broadcast speeches of the Russian president directly and doesn't quote the leader of the country. American audience and readers usually have a chance to know only the retelling or hearsay of words of Vladimir Vladimirovich distorted by interpretations of journalists and analysts.

Oliver Stone considers that Americans deceive themselves. The director had done fifteen interviews to eliminate this self-deception. Stone managed to organize such a great number of meetings, as he had got out of his comfort zone. Interviews often hadn’t been planned, and the American director got time to ask questions in a hurry: at the street, on board of the presidential plane, in corridors, on the way to the hockey platform.

During their meetings Stone asked questions about sensitive issues to the Russian president, trying to get direct answers about the politician's position towards NATO, Syria, Ukraine and the relations between Moscow and Washington. Besides, the president had disclosed some unknown details of his private life and political biography: Putin had told about "hard nineties", about his parents and his daily routine, about personal wealth and about his own views towards sexual minorities.

In Russia "The First Channel" announced the premiere as a world political and cultural event. "The First Channel" also interviewed Oliver Stone and the director told Russian TV audience how he had been shooting the movie about the president. The interview with Stone came out on the 9th of June, 2017. 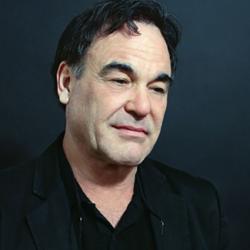