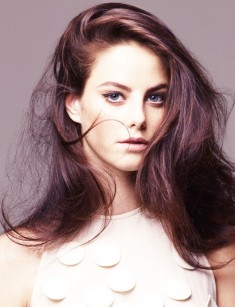 Kaya Scodelario is a young British actress, a star of the television series Skins, the dystopian film The Maze Runner and the thriller Emanuel and the Truth About Fishes.

The future actress was named Kaya Rose Humphrey at birth. The girl was born in the Paddington district of London, where she spent her childhood. Kaya was just a baby when her father, the Englishman Roger Humphrey, left the family. Her mother brought up the girl.

By the way, Kaya’s mother is a Brazilian woman and she is fluent in Portuguese. When Kaya grew up, she officially changed her name to Scodelario, her mother’s maiden name. Kaya rarely saw her father, and in 2010 the man died.

In the school, it transpired that Kaya Scodelario suffered from dyslexia. She read with great difficulty, and thus she could not cope with the lessons. As a result, the girls had low self-esteem. So acting career was the best possible way for her. Kaya could not only develop herself as an actress but also she had looked differently at herself.

The girl dreamed of becoming an actress since early childhood. Scodelario soon started to perform in the drama club, to play in the children productions, and she already had a personal agent at the age 13.

Kaya Scodelario was 14 years old when she decided to take part in the casting for youth television series Skins. At the audition, she was one of the youngest contestants. It embarrassed the girl, and Kaya was sure that her age would be the reason for refusal. But the producers asked her to read a piece of writing by heart and they were satisfied. As a result, Scodelario got the role of Effy Stonem, and Kaya played in this series for six years. By the way, her height is 168 and weight are 55 kilos.

It is interesting that the original Scodelario’s role was a minor one and she periodically appeared on screen in the first season. Then, thanks to Kaya’s talent, her screen time expanded, and at the end, she became one of the main characters. The first television series influenced the cinematic biography of the actress.

Simultaneously, the actress started acting in feature films. The fantastic thriller Moon with her participation was released in 2009. The film tells the story of an astronaut Sam Bell (Sam Rockwell), who has lived on the Moon for three years and prepared to return to Earth. But at that time incredible things began to happen.

In 2010, the actress appeared in the fantasy action movie Clash of the Titans about the life and exploits of the ancient hero Perseus, the son of Zeus, who spent his childhood among people. Perseus needed to interfere with the god of the underworld Hades, who intended to release the demons outside. The film, where Kaya Scodelario performed the role of Peshet, brought the creators $ 450 million.

A year later, the actress received an invitation to the main role in the melodrama Wuthering Heights, the screen version of the novel by Emily Bronte. In the film, the actress played the heroine of Cathy, Heathcliff's (James Howson) beloved woman, whose feelings gradually turned into hatred. The events took place in Great Britain, Yorkshire, at the end of the 18th century.

In 2012, the romantic drama Now is Good was released. It tells the story of a young girl Tessa (Dakota Fanning), who suffers from leukemia and she decides in the last weeks of her life to make her dreams come true. Instead of hospitals, the heroine goes to seek entertainment and new love. Kaya Scodelario played Tessa's best friend, Zoey.

At the same time, the actress was chosen for the British drama Spike Island about the biography of musicians of indie bands who once went on a performance on the island of Spike, in Cheshire. The actress played the main role in the thriller Twenty8k about the mysterious murders that occurred near the nightclub.

After the success of the thriller Emanuel and the Truth About Fishes, where the actress appeared in the image of a young girl Emanuel, Kaya Scodelario auditioned for the role of Katniss Everdeen in the film The Hunger Games and Teresa Agnes in the film The Maze Runner but received only the last one. Also, the actress played the main character in the crime thriller Tiger House.

In 2013, British television showed the drama Southcliffe about a series of murders that occurred in a small town during one day. Kaya Scodelario got a supporting role in the film.

In 2015, the filmography of the actress included the adventure film The Moon and the Sun, which is a continuation of the anti-utopia The Maze Runner: The Death Cure.

During the filming of the TV series Skins, 15-year-old Kaya Scodelario met with the partner Jack O’Connell. At that time the young girl began to live separately from the mother. She doesn’t think that she has started independent living too early, as she is sure that a modern woman needs to be independent and strong.

The other partner in the Skins actor Luke Pasqualino introduced Kaya to his best friend Elliott Tittensor, the star of the series Shameless. The girl fell in love at once, but she didn’t want to show it. At the TV Choice Award ceremony where they both were nominated, Kaya changed seats with other invited guests on purpose in order to sit at the same table with Tittensor.

The actress hoped that her initiative would be unnoticed, but the young man understood everything and with a smile invited the embarrassed girl to spend the weekend together. The young people soon announced them as a couple and dated for five years. Kaya supported the beloved man even in the difficult situation when the police accused the actor of intentionally causing harm to a pedestrian who crossed the road in front of his car.

But in 2014, Kaya Scodelario and Elliott Tittensor broke up, and a new young man Benjamin Walker appeared in her life. They met on the set of the film The Moon and the Sun. On December 28, 2014, they publicly announced their engagement. The wedding ceremony was held on this day a year later, and since then, the couple has been always together.

June 7, 2016, Kaya told fans on her page on social network Instagram that she and her husband were waiting for their firstborn. In the autumn, the gender of a child became known, Kaya Scodelario and her husband would have a son. She successfully gave birth to the child on December 1, 2016.

It is interesting that the British actress is a big fan of Arnold Schwarzenegger, especially a series of films about the Terminator. Kaya even called her cat Arnie in honor of the American actor and Governor.

In addition to her acting career, Kaya co-operated with the UK model agency Models 1. Scodelario had photo sessions for glossy editions Teen Vogue, Nylon, Instyle UK, Elle UK, Dazed & Confused, Vogue, and i-D. Fans of Playboy are waiting for photos of a naked actress in the magazine, but the young woman has not yet brought herself to it.

Kaya Scodelario also starred in music videos for "Stay Too Long", "She Said", "Love Goes Down" and "Writing's on the Wall" by British musician Plan B. In 2012, the actress appeared in a video for Robbie Williams' song "Candy".

In the spring of 2017, a group of hackers stole a copy of the movie Pirates of the Caribbean: Dead Men Tell No Tales, which was shot at Walt Disney. The criminals contacted the management of the studio to get a large amount of ransom in bitcoins. Hackers threatened to make the record freely accessible in case of non-fulfillment of requirements.

FBI officers were involved in the investigation of the crime. After a number of operations, the premiere of the film was successfully held on May 25. The main roles were played by Javier Bardem, Johnny Depp, Geoffrey Rush, Kaya Scodelario, and Kevin McNally.

In 2017, the shooting of the film The King’s Daughter ended. It tells about the search for the elixir of eternal youth in the time of Louis XIV. Now the actress is playing in new projects such as the fantastic action movie The Maze Runner: The Death Cure, which is expected to be released in 2018, and the drama Stay With Me, where her partner will be Tom Hughes. 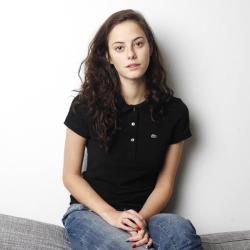