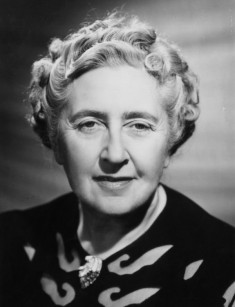 Agatha Christie is an English writer, novelist, and playwright. The author’s books are still sold in millions of copies.

Agatha Christie was born on September 15, 1890. Her hometown was Torquay, located in the English County of Devon. The girl was named Agatha Mary Clarissa Miller. Her parents were wealthy immigrants from the United States. Besides Agatha, the family had two children, elder sister Margaret Frary and brother Louis Montant. The future writer spent her childhood in the estate of Ashfield.

In 1901 Agatha’s father died and the family could no longer afford a lavish lifestyle. They had to reduce expenditures and to save money.

Agatha didn't go to school, as the mother was engaged in her education, and later they had a governess. In those days, girls were mostly prepared for married life, they were taught manners, needlework, dancing. Agatha received a good musical education at home, and if not stage fear, she had all the chances to become a musician. From childhood, Miller’s youngest daughter was quite shy and, unlike her brother and sister, had a calm temper.

At the age of 16, Agatha was sent to one of the Paris pensions. She studied without diligence and was always homesick there. Her main “achievements” were two dozen grammatical mistakes in dictation and faint before the performance at the school concert. Then Agatha studied at a different pension for two years and later returned home being a different person. The future celebrity turned into an attractive blonde with long hair and languorous blue eyes from a slow-witted, shy girl.

The future writer worked in a military hospital during the First World War, fulfilling the duties of a nurse. Then she became a pharmacist, which later helped her in writing the detectives as 83 described crimes were committed by poisoning. Agatha took the name Christie after marrying and she started to write masterpieces between duties in the Pharmacy Department of the hospital. It is assumed that her sister suggested the girl the idea of writing.

Agatha Christie created her first detective novel The Mysterious Affair at Styles in 1915. The writer tells about the key image of the novel the detective and Belgian Hercule Poirot on the basis of acquired knowledge and connections with Belgian refugees. The first novel was published only in 1920 because earlier the book was rejected by publishers more than five times.

Nowadays there are series about the famous detective, who became the favorite character of viewers around the world. Directors will constantly return to the novels of the British, creating interesting films, being inspired by the writer's books. They shot such film as Agatha Christie's Poirot, Miss Marple, Murder on the Orient Express.

By 1926 Christie became quite famous. Author’s works were published in a large number of world magazines. In 1927, Miss Marple appeared in the story The Tuesday Night Club. The reader gets acquainted with this shrewd old woman in the novel The Murder at the Vicarage (1930). Then invented by the writer characters were included in several book series. Murders and investigation will be the main subject in the detectives of the British writer.

Agatha Christie was also a successful playwright. A great number of plays and performances are based on her books. The plays The Mousetrap and Witness for the Prosecution have become the most famous ones.

There are more than 60 novels in the author’s bibliography, six works under a Pen name Mary Westmacott and numerous short stories, combined into 19 collections.

In 2014 Agatha Miller married pilot and Colonel Archibald Christie. Later they had a daughter Rosalind. The marriage lasted for 12 years, then the husband confessed to the writer that he fell in love with some Nancy Neele. There was a scandal between spouses, and Agatha disappeared next morning.

The whole literary world noticed her mysterious disappearance because by the time she became quite famous. The writer was searched by thousands of people for eleven days, but they only found her car. It turned out that for all that time, Agatha Christie stayed at a hotel under a different name, where she visited beauty treatments, a library, played the piano. Years later she could not explain the act, but the doctors suggested that the writer had an attack of amnesia during the nervous breakdown. The day before, besides her husband’s betrayal, Agatha also suffered the death of her mother. Two years later the couple officially divorced.

The second time Christie married Max Mallowan, who was an archaeologist. They met during a trip to Iraq. The writer lived with that man for 45 years.

• Agatha Christie became a writer because of her stage fear. As a child, the girl wanted to devote her life to music, but the fear of public speaking prevented her from delivering those plans.

• Agatha worked as a nurse during the First World War. In addition, the future writer was also a pharmacist. Such experience in medicine left an imprint in the work of the British because more than 80 murders in the author's works were committed by poisoners.

• The image of Miss Marple was inspired by her grandmother.

"Previously it was fascinating to write books. Partly because I did not feel a real writer, and each time I was surprised that I could write a book that was published. Now it has become a routine process, my work"- Christie wrote in the Autobiography.

• When Christie "killed" Hercule Poirot, the New York Times published a memoir. This is the only fictional character who has received such an honor.

• In 1956, the writer was awarded the Order of the British Empire, and in 1971, Christie was awarded the title of Dame Commander in the field of literature for her achievements. The Award winners also receive the noble title “Dame”, which is used before the name.

• After Agatha Christie's death, her works continue to be published in millions of copies. Novels and detectives are popular until now. A number of her published books takes the third position after the works of Shakespeare and the Bible. Christy is considered the most famous representative of detective fiction. The author published six psychological novels (under the pseudonym of Mary Westmacott), 19 collections of short stories and 60 detective novels.

• Agatha Christie suffered an incurable disease. Some believe that Christie could not write down the text, suffered from dysgraphia, and the works were dictated. In addition, the staff at the University of Toronto explored the writing manner of Christie’s latest letters and suggested that the writer had Alzheimer disease.

The life of the "Queen of Detectives" ended on January 12, 1976, after a cold. The writer was buried in the village of Cholsey. 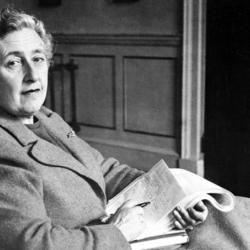