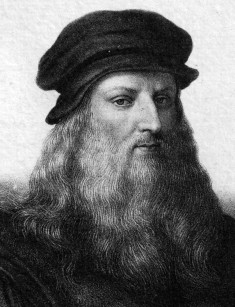 The future genius was born to noble Piero da Vinci and a young peasant woman Caterina. According to the social norms of that period, they could not marry because of the mother’s lowborn blood. After her first child was born, Caterina was made to marry a potter; she lived with her husband for the rest of her life and gave birth to four daughters and a son.

The first-born Leonardo lived with his mother for three years. Right after he was born, his father married a rich noblewoman, but the legitimate wife could not give birth to a successor. Three years later, Piero took his son and began to bring him up. Leonardo’s stepmother died ten years later during childbirth. Piero married again and became a widower soon. Overall, Leonardo had four stepmothers and 12 half-siblings from the paternal line.

The father brought Leonardo to a master from Toscana, Andrea del Verrocchio. The young man became an apprentice and learned the art of painting and sculpture. Young Leonardo studied arts and sciences, leather handling, the basics of metal and chemical agent operation. All this knowledge turned out to be useful later.

At 20, Leonardo got qualified as a master and continued to work under Verrocchio’s guidance. The young artist assisted his teacher: for example, he traced background lines on his pictures or secondary characters’ clothes. In 1476, Leonardo finally got his own workshop.

In 1482, da Vinci’s patron, Lorenzo de' Medici sent the young man to Milan. At this period, the artist worked on two paintings, but he never finished them. Duke of Milan Ludovico Sforza hired Leonardo to the court staff as an engineer. The authoritative figure was interested in defense structures and amusement. Thus, da Vinci had the chance to develop his talent of an architect and mechanic. His inventions proved to be much better than what his contemporaries could offer.

The engineer spent 17 years in Milan under Sforza’s patronage. He created the paintings Virgin of the Rocks and Lady with an Ermine, the famous drawing Vitruvian Man, the clay model of Leonardo's Horse (the monument to Francesco Sforza), and the mural painting The Last Supper in the Dominican monastery. He also made many anatomic sketches and apparatus schemes.

Leonardo’s talent of an engineer was useful when he came back to Florence in 1499. He began to serve to Duke Cesare Borgia who counted on da Vinci’s talent to create martial mechanisms. The engineer worked in Florence for seven years and returned to Milan. At that time, he had completed his most famous work that is exhibited in the Louvre Museum today.

The second Milan period lasted for six years. Later on, Leonardo moved to Rome. In 1516, he went to France where he spent his last years. The artist’s apprentice and the main artistic style successor Francesco Melzi accompanied him.

Although Leonardo spent only four years in Rome, there is a museum named after him in this city. In these three rooms, visitors can see the pieces of apparatus based on Leonardo’s schemes and watch copies of paintings, photos of the man’s diaries, and manuscripts.

The Italian genius devoted his life to engineering and architecture. His inventions related to peace and war times. Leonardo is known as the creator of many prototypes: tanks, flying machines, self-propelling carts, catapult, bicycle, parachute, mobile bridges, and auto-machine guns. Some schemes continue to puzzle explorers today.

In 2009, the channel Discovery presented a series of movies Da Vinci's Machines. Each of the ten episodes pertained to constructing and testing the mechanisms based on Leonardo’s original schemes. The movie technicians tried to recreate the Italian’s inventions using the materials of his epoch.

The master kept his personal life secret. He used a code in his diaries, and even decoded notes gave little information. There is a theory that da Vinci was gay and, for that reason, guarded this secret as tight as he could. Scientists suggested this theory because of some obscure facts: when the artist was young, he appeared in the record of a sodomy case, although it was unknown how he was related to it. After that, the master became a private person and did not comment on his personal life.

Leonardo’s pupils could be his lovers; Salaì was the most famous among them. The young man’s appearance was feminine, and he posed to several paintings. St. John the Baptist is one of Leonardo’s works; it was Salaì who sat for the painting.

There is a theory that Mona Lisa was also created from this man who was wearing a woman’s dress. Indeed, there is some resemblance between the persons in Mona Lisa and St. John the Baptist. Moreover, da Vinci bequeathed his masterpiece to Salaì.

Sometimes, Francesco Melzi is also believed to be Leonardo’s lover.

There is another version of the artist’s personal life secret: Leonardo had a romantic relationship with Cecilia Gallerani who probably posed for Lady with an Ermine. This woman was a favorite of Duke of Milan, held a literary salon, and patronized artists. She allegedly introduced the young genius to the Milan bohemian circles.

Scientists found a draft of a letter to Cecilia that began with the words: “My beloved goddess.” They also believe that the portrait Lady with an Ermine has some traces of the hidden feelings to the woman pictured there.

Some experts believe the great Italian was not engaged in body love: neither men nor women attracted him physically. In this context, Leonardo lived like a monk who had no offspring but left the vast artistic heritage.

Modern scientists came to the conclusion the artist died of a blood stroke. Da Vinci died in 1519 when he was 67. Thanks to the memoirs of his contemporaries, it is known the genius had partial paralysis by that time: he could not move his right arm, probably because of a stroke in 1517.

Despite the paralysis, the master led an active artistic life and used the help of Francesco Melzi. Gradually, da Vinci’s condition deteriorated: by the end of 1519, he could barely walk. These facts support the theoretical diagnosis. It is guesstimated that another stroke in 1519 led to the artist’s death.

Leonardo spent the last three years of his life in the Clos Lucé castle near Amboise. According to his last will, he was buried in the gallery of Saint-Florentin Church. Unfortunately, the grave was destroyed during the French Wars of Religion. The church where the master rested was robbed; it was in a terrible state. The new owner of the castle, Roger Ducos, had it torn down in 1807.

After the Saint-Florentin Chapel was destroyed, the remains from many burial places were removed and buried on the territory of the garden. From the mid-19th century, experts were trying to identify Leonardo da Vinci’s bones. The lifetime description of the master was the primary source; the bones that were likely to belong to the man were selected and studied. Arsène Houssaye carried out the work. He found the fragments of the alleged tombstone and a skeleton that lacked some parts. The bones were reburied in the reconstructed grave in the chapel of Saint-Hubert, at the territory of the Château d'Amboise.

In 2010, a group of scientists led by Silvano Vinceti planned to exhume Leonardo’s remnants. They were going to identify the bones with the help of the genetic material taken from Leonardo’s relatives from the fraternal side; the material was going to be exhumated as well. However, the Italian researchers did not receive the agreement of the castle’s owners to carry out the procedures.

At the beginning of the past century, the granite memorial was erected at the place where the Saint-Florentin Church used to be. It was the 400th anniversary of the master’s death. The reconstructed grave and the stone monument are popular tourist attractions in Amboise.

The mystery of da Vinci’s paintings

Art critics, researchers of religion, historians, and ordinary people are captured by Leonardo’s art. The genius’s works inspired scientists and artists. There are numerous theories that reveal the secrets of da Vinci’s paintings. According to one of the most popular paradigms, Leonardo used a specific graphic code.

Thanks to a device made of several mirrors, researchers discovered the characters of Mona Lisa and St. John the Baptist looked at a creature wearing a mask; the creature bore some resemblance to an alien. The secret code in Leonardo’s notes was also decoded with the help of a mirror.

The mystification of the Italian genius’s art resulted in many pieces of art. The novels of Dan Brown became bestselling. In 2006, the movie The da Vinci Code based on Brown’s book under the same title was released. Religious organizations severely criticized the movie, yet the box office was recording in the first month.

Not all works survived to the modern times. Medusa's Shield, Leonardo’s horse, Madonna of the Yarnwinder, Leda and the Swan, and The Battle of Anghiari were lost.

Modern scientists know about some paintings thanks to the memoirs of da Vinci’s contemporaries. For instance, what happened to the original of Leda and the Swan is still unknown. It is believed the painting was destroyed in the middle of the 17th century by order of Marquise de Maintenon, the wife of Louis XIV of France. Only sketches of the painting made by Leonardo and several copies made by different artists survived.

The painting portrayed a young naked woman in the embrace of a swan. Infants who hatched from giant eggs were playing near the woman’s feet. The artist was inspired by a famous myth. It is interesting that Leonardo was not the only artist who created a painting about Leda and Zeus in the form of the swan. Da Vinci’s lifetime rival, Michelangelo, also created a painting on this theme. Buonarroti’s work was also gone: both pieces of art disappeared from the collection of the French royal house.

The painting Adoration of the Magi was one of Leonardo’s unfinished works. The Augustinians ordered the painting in 1479, but da Vinci did not complete it because he moved to Milan. The ordering party found another artist, and Leonardo saw no point in finishing the job.

Researchers believe the composition of this painting has no analogs in the Italian pictorial art. One can see Mary with Christkind and the Magi; there are horsemen and pagan temple ruins behind them. There is a theory that Leonardo pictured himself at 29 among the men who came to Jesus. 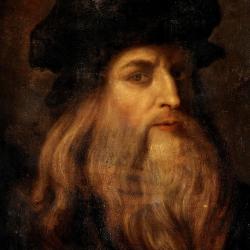