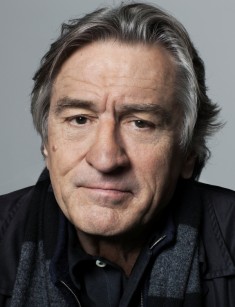 Robert de Niro is an American actor, who became popular playing the roles of gangsters and Mafia leaders in dozens of films. De Niro has won Oscar several times, becoming the first actor who received this statuette for the non-English role, as well as the Golden Globe. Today, the actor moved away from the criminal's role. Journalists more often call De Niro "the main Hollywood pensioner", because the actor does not hide his age and is not afraid of playing grandfathers.

Robert De Niro Jr. was born in Manhattan in a bohemian family. His parents, Robert De Niro Sr. and Virginia Admiral, were well-known artists-abstractionists. In addition, De Niro Sr. was a sculptor, and Virginia professionally wrote poems. His father has Italian roots, and his mother is of English, French, Dutch and German origin.

When the boy was three years old, Robert's parents divorced. The divorce was peaceful and without unnecessary scandals. For their friends as well as for the future actor it was shocking news. Robert doesn’t know the real reason for his parents’ divorce. The son lived with his mother, who paid little attention to Robert.

Of course, the boy spent a lot of time with his friends, who called the future actor "Bobby Milk" for the pale skin. Perhaps, only his love for art protected little Robert from joining the street gang.

At first, the boy studied at a private general education school, but then entered the Fiorello H. Laguardia High School Of Music & Art and Performing Arts.

In addition, Robert attended acting courses of the famous teachers Stella Adler and Lee Strasberg. The young man was taught not only acting skills but also an understanding of acting. It is interesting but the teachers of Robert de Niro supported the outstanding system of Konstantin Stanislavski.

Thus, the future famous actor chose his career in childhood and began to move towards his goals.

For the first time, twenty-year-old de Niro played the role of the groom's friend in the comedy "The Wedding Party" by Brian De Palma. But because of the difficulties, the movie was released only six years later. Therefore, the first work in the movie for the actor is considered the movie "Three Rooms in Manhattan" released in 1965.

Robert became famous after starring in the movie "Bang the Drum Slowly" in the role of a baseball player. For this film, the actor received the New York Film Critics Association award as the best supporting actor. Robert also attracted the attention of the public and filmmakers. As a result, he received the role of the young Vito Corleone in the famous blockbuster "The Godfather Part II" by Francis Ford Coppola. This role brought de Niro the first statuette of "Oscar" as the best supporting actor.

This was the first time in the history of the famous award when the winner was an actor who did not say a word in English because in the film De Niro speaks only Italian.

Then followed such amazing films as "Taxi Driver", "1900", "Synecdoche, New York", "The Deer Hunter" and others, which were successful both among the audience and professional critics. The popular actor Robert de Niro turned into a megastar.

The eighties brought new success. The role of the boxer in the film by Martin Scorsese "Raging Bull" brought the next Oscar award for the best actor.

But after the gangster film "Once Upon a Time in America", released in 1984, De Niro got a lot of monotonous roles. The directors associated him with either the villain-Mafiosi or with the police super-agent. Nevertheless, dozens of works of the actor caused positive reviews of fans and critics.

Sometimes De Niro appeared in the main roles in different films in order to get rid of the role of a gangster. So, Robert de Niro starred with Meryl Streep in the melodrama "Falling in Love", where he plays a married man who found love with another woman.

But in the second half of the nineties, the actor became less popular. He got neutral and sometimes cool reviews. The last movies that received recognition and commercial success were "Casino" and "Heat". Both were released in 1995, and in the last film, he starred along with another famous film-maker Al Pacino.

In 1999, Robert de Niro played the main role in the comedy "Analyze this." The actor played the Mafiosi Paul Vitti, the head of the criminal clan. The gangster suffered from problems with nerves and hired a psychoanalyst, whose role was played by Billy Crystal.

In 2001, De Niro played the main role of the safe burglar in the film "The Score", directed by the actor himself.

In 2002, the actor again played the Mafiosi Paul Vitti in the sequel to the comedy about the gangster and his psychoanalyst "Analyze that."

In the middle of the 2000s, Robert de Niro again becomes popular. He stars in two or three films a year, in many of them the actor plays the main roles.

In 2011, Robert de Niro plays the main role in the Italian comedy melodrama "The Ages of Love." The Italian actress and model Monica Bellucci also acted in the film.

In 2013, the actor played in the comedy "Last Vegas". A lot of famous actors appeared in the film such as Michael Douglas, Morgan Freeman, and Kevin Kline. In the same year, De Niro played four more main roles.

Robert de Niro, like most Hollywood stars, had many women. In his youth, he was constantly surrounded by scandals and gossip, even when he was married.

For the first time, De Niro married a singer of African origin, Diane Abbott, who played several episodic roles in films where the actor was also shot. Diane had a daughter Drena, for whom Robert became the official stepfather, adopting the girl. The couple also has a common son Robert. Both children tried themselves in the movies. But if Drena interested the directors and periodically appeared in the films, then the boy did not show any special talent, and after growing up, he became a businessman.

Ten years later, the couple divorced, although they did not live together for a long time. The new girlfriend of Robert De Niro was another African-American photo model Toukie Smith. The couple did not get married but they lived together for several years and even with the help of a surrogate mother, their children Julian Henry and Aaron Kendrick were born.

The second and the last marriage of the actor was with the former stewardess Grace Hightower. This happened in 1997. A year later, De Niro and his wife found a surrogate mother. And their son Elliot was born. In 2011, with the help of a surrogate mother, they again became parents. Their daughter Helen was born.

In addition to his successful acting career, Robert De Niro is an excelled restaurateur. He owns several networks of various cafes and restaurants, including the world-famous "Nobu".

Robert de Niro, despite the fact that he is already over seventy, regularly stars in the films. He is a popular actor, was nominated for Oscar and Golden Globe several times.

De Niro demonstrates his talents not only in cinema but also in theatre. On February 4, 2016, the premiere of the musical "A Bronx Tale" directed by Robert de Niro. The music for the production was written by Oscar-winner Alan Menken and the script - by Chazz Palminteri.

On May 20, 2017, there will be a premiere of a biographical drama with De Niro in the title role "The Wizard of Lies". The film is based on the book by Diane Hendricks and tells about the life of Bernard Madoff and his scheme Ponzi.

Today De Niro stars in the film "War with Grandpa”. The date of the premiere of the film about the disagreements between grandfather and grandson because of the living space has not yet been announced. 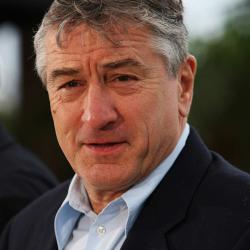