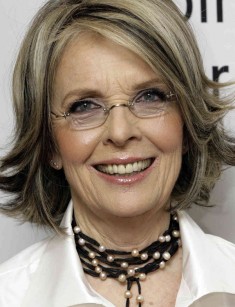 Diane Keaton is an actress, producer and film-director from the USA. She was born on the 5th of January, 1946 in Los Angeles. Her real father’s name is Hall. Keaton is her mother’s maiden last name, which she took for the stage name. She did it on purpose, not to be confused with the actress Diane Hall, who at that time already was in the Screen Actors Guild of the USA.

Diane was born in the family of a civil engineer Jack Hall and a housewife Randy Hall. She was a first-born in her family. Diane has two sisters and a brother. Her mother won an honorable title of "The Best Housewife of Los Angeles" in "Mrs Los Angeles" pageant. Little Diane was really impressed and just after this occasion, she began to dream about the career of the actress. Her favourite actress was Catharine Hepburn. Young Diane was watching films featuring Catharine all day long.

During her studies at school, she took part in all stage productions and musical performances. Keaton played major and secondary roles in the shows, special events. Also, she performed different songs at school parties.

After school, Diane entered Theatrical College to study the Theory of the Acting process. She wasn’t studying here for a long time and dropped it out for practical studies.

There begins a difficult period in her life – Diane moves to New York. Here she had to fend for herself with temporary jobs in clubs alongside her studies in the Theatre School in Manhattan.

The year 1968 can be considered the beginning of the creative career of Diane Keaton. This year she got the part in the popular Broadway rock-opera "Hair".

After the successful opening of the opera, she auditioned for a part in Woody Allen's production of "Play It Again, Sam". She got an interesting part of Linda Christie, for which she was honored with her first "Tony Awards" the same year.

Right after this job, a creative partnership began between Keaton and Allen and later it developed into a romantic relationship.

In 1970 Diane made her film debut in "Lovers and Other Strangers ". After that, she played some minor roles in TV series. But later she was lucky to meet Francis Ford who invited her to take part in the film "Godfather ", in which Al Pacino became her partner on a film set. The movie was released in 1972 and got all kinds of the world’s Film Industry awards including universally recognized Academy Awards. Two years later the second part of the movie was represented to the audience. Young and aspiring actor Robert De Niro played a part of Vito Corleone. For this part, he received the desired Oscar.

In 1978 Diane Keaton played the character of Annie Hall in the movie with the same title. For her brilliant performance, she was awarded Golden Globe Award and by Academy Awards too. And she really deserved it. The same year she starts to play in the movie "Reds" by Warren Beatty. This movie was inspired by the novel "Ten Days That Shook the World" by John Reed.

In 1982 Diane was nominated for Academy Awards for the great performance of the character of Louise Bryant – the beloved of the main character of the novel.

In 1980-s Diane takes part in diverse movies: the thriller "The Little Drummer Girl", drama « Mrs Soffel», the melodrama with criminal subtext «Crimes of the Heart ». In 1987 Diane cooperates with Woody Allen one more time and a fascinating movie "Radio Days" appears as a result of their collaborative art.

During this period of time, Keaton tries herself as a scriptwriter and also a director. She releases her non-fiction movie "Heaven". Next years she continues her practice as a director and films a few music videos and a movie "Wildflower" with Patricia Arquette. Moreover, Diane takes part in creating some episodes in the TV series "Twin Peaks" and "China Beach".

When Diane was nearly 45, she became one of the most versatile and desired actresses of Hollywood. She changes her role and plays characters of aged women: a wealthy lady, a mother of seven, a middle-class woman. At the same time, Francis Ford Coppola shoots a new part of the legendary story "Godfather" about the gangsters and proposes a part for Diane Keaton.

The year 1993 brought Keaton and Allen together on a movie set again. In the movie "Manhattan Murder Mystery" Diana played the part which was meant for Mia Farrow. Farrow left this project because of their breakup with Woody Allen.

In 1995 Keaton gets back to the direction and shoots a movie "Unstrung Heroes" featuring John Turturro and Andie MacDowell. Despite the participation of the famous actors, this movie wasn’t a financial success. That’s different from the movie "The First Wives Club", which was popular enough and grossed over 100 million dollars only in the USA.

The movie "Marvin’s Room", in which Diane Keaton acted together with Meryl Streep and Leonardo Di Caprio brought her another nomination for Academy Awards.

At the beginning of 2000, Keaton takes an active part in Tv shootings and continues to work in movie projects. In some projects, she appears as a producer, e.g. "Elephant" by Gus Van Sant.

In 2003 an amazing movie "Something's Gotta Give" featuring Keanu Reeves, Diane Keaton and Jack Nicholson was presented to the audience.

Diana was again nominated for "Oscar" for best actress. The movie "Mad Money" and the film "Morning Glory" received rather positive feedback both from movie critics and audience.

In 2013 the movie "Big Wedding" was released bringing together so famous actors, as Susan Sarandon, Katherine Heigl and Robert De Niro. Further, Keaton was in a movie "And So It Goes " directed by Rob Reiner with Michael Douglas taking one of the major parts.

In 2016 actress took part in voice-over work on "Finding Dory" animated series. Her character was a fish Jenny, mother of the protagonist.

During that year she also published her autobiography in the book "Then Again".

Apart from cinematography, Diane is fond of photography. A couple of her pictures already saw the light of the day.

Also, Diane is known as an opponent of plastic surgery and in her interviews, she often speaks out against artificial beauty. L’Oreal Group concluded a contract with Keaton in the middle of the first decade of XXI, under which Diane is still the face of the company.

In her leisure time, she makes real estate deals as a hobby. She purchases ancient buildings, which require maintenance and renovation. She also realizes their restoration and then resells the buildings for a higher price

One of Diane’s hobbies is active involvement in restoration campaigns in order to restore and preserve ancient buildings and constructions of historical importance. 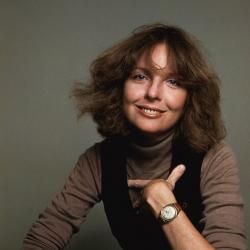