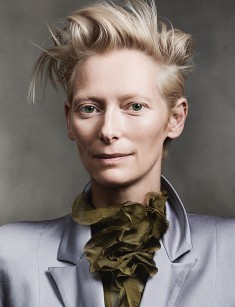 Katherine Matilda Swinton of Kimmerheim, better known as Tilda Swinton is a British film actress, most often acting in art movies. The most famous films of the actress are "Orlando", "Constantine", "The Curious Case of Benjamin Button", "Michael Clayton", for which the actress received many awards, including "Oscar".

Tilda was born in the British capital to the family of Sir John Swinton, the seventh Lord of Kimmergem, and Lady Judith Balfour Killen. As it is clear from the titles of the actress's parents, the girl comes from a very ancient Anglo-Scottish family, dating back to the 11th century. Swinton spent the first 10 years of her life in Germany, where the girl's father worked in the army as a major general. Then the study began at the prestigious closed boarding school in Kent. This institution was attended by the children of aristocratic families. For example, Diana Spencer, the future Princess of Wales, studied with Tilda.

Swinton studied perfectly, sang at school choir and was a promising athlete, as she ran very well. She could have become a professional sportswoman, but Tilda was not satisfied with the idea of competing for the prize. And when there were large tournaments the girl simulated an injury.

She received higher education at Fettes College, as well as at New Hall, a special institution for female at Cambridge University. Tilda studied political science, sociology and English literature. Also it should be noted that the future actress spent two years in African countries, where she worked as a volunteer with children.

At "New Hall" Tilda first tried to perform on stage and got incredible pleasure from it. Later, the actress joined the Royal Shakespeare Theater in Stratford and toured with such famous actors as Gary Oldman and Kenneth Branagh. Then Swinton performed with other troupes and in six years managed to enter the elite of the British theater. But in 1989, the actress decided to focus only on cinema.

Firstly, Tilda Swinton appeared in TV series, and then met the independent film director Derek Jarman and their long cooperation began. The actress played in the biographical drama "Caravaggio", the philosophical film "The Last of England", the military psychological drama "War Requiem", the film about gays "The garden", the biographical comedy "Wittgenstein". When Jarman died, the actress for more than a year couldn’t control herself, struck by the death of a close friend.

The first turning point in the career of Tilda was the adaptation of the legendary novel by Virginia Wolff "Orlando". Critics called Tilda’s play as stunning. Swinton created two images of one person - male and female, and was awarded the title of best actress of the year at several film festivals.

Mix of male and female images has become a distinctive feature of Tilda. The actress wears short hair, unisex style clothes and positions herself as androgyne. Also this duality of Tilda's image is promoted by the high growth of the actress - 179 cm. This is not only a stage image. With such an avant-garde image, connected the creative biography of the actress as well as everyday life.

The actress continued to appear in the art cinema. There was a thriller "Female Perversions", the biographical film "Love is the Devil", the Italian criminal drama "Protagonists", the family drama "The war zone".

A new important step for the actress was participation in the American adventure thriller "The Beach", in which the actress played along with Leonardo DiCaprio. This picture opened for Tilda the way to Hollywood. However, the actress did not take at every scenario, and chose only those where Tilda could try something new and interesting as an actress.

Her first work in North America was the thriller "The deep end", the mystical film with Tom Cruise "Vanilla sky", the fantastic comedy "Teknolust", the criminal drama "Young Adam", the psychological thriller "Conviction" and the horror film "Constantine", where Swinton cooperates with Keanu Reeves.

The lovers of fairy tales and fantasy enjoyed the adaptation of The Chronicles of Narnia, where Tilda appeared in all parts in the role of the White witch. The detective film "Michael Clayton" was significant for the actress, because this film brought the actress "Oscar".

Also, there was the film "Julia", in which Swinton excellently played an aging alcoholic, the fantastic movie "The Curious Case of Benjamin Button", the melodrama "Io sono l'amore" and the psychological drama "We Need to Talk About Kevin". The actress showed the emotional confusion of the mother of a teenager- killer in the film.

Fans of Tilda Swinton were attracted by the fantasy drama "Only Lovers Left Alive", in which the actress played the main role, and her partner in the shooting was Tom Hiddleston. The plot is a vampire love drama, but the film is filled with the atmosphere of the underground and art house, which became a feature of the film that separated the film from the already banal genre.

In 2014, Tilda Swinton played a secondary role in the tragicomedy "The Grand Budapest Hotel". The film received a grand prix at the Berlin Film Festival. The actress played the role of Madame Celine-Villeneuve Degoff-und-Taxis, remarkable for the fact that this elderly woman at death is much older than the actress. But Tilda Swinton did not embarrass such a difference.

In 2015, Tilda Swinton impressed fans with a change of style. The actress gained popularity as an androgynous, morbidly pale, "unearthly" appearance and the roles of elves, magical creatures and other mystical creatures. Therefore, the image in the film "Trainwreck" was a surprise for the fans. "Unearthly" Tilda looked like an average woman: with long hair, light tan and natural make-up. In response to the admiration of fans and journalists, Tilda Swinton admitted that as an actress she was happy to be unrecognizable.

At the rehearsal of the play, Tilda Swinton met Scottish artist John Patrick Byrne. In the theater, the man was engaged in decorating, but generally specializes in painting, and John's paintings are part of the collection of the National Portrait Gallery of Scotland.

Tilda and John began to live together, and later their twins - the son Xavier and the daughter Honor were born. After a while, this union broke up, and the actress met another man - an artist from New Zealand Sandro Kopp. The couple lives in an estate in Scotland, and John Byrne often visits his children, as he and Swinton remained friendly relationship. Byrne can even live for several days in the house of his ex-wife. Because of that among the townsfolk there is a popular gossip, as if the actress lives with two men at once.

Tilda Swinton herself refers to such rumors philosophically. The actress believes that the public has become accustomed to violent relations and piquant celebrity intrigues, and since the actress's family does not give any real reasons, the public imagine and invent something that is really not there.

In 1995, the actress participated in an unusual exhibition of avant-garde artist Cornelia Parker, where Swinton acted as a living exhibit. Tilda for 8 hours a day lay with her eyes closed in the crystal box, depicting the Sleeping Beauty.

Also, the actress regularly participates in author photo sessions, where she appears not in fashion glossy images, but with a complex make-up and in fantastic costumes. Such photos can be seen both in magazines and on photographers' websites, and in Instagram.

In 2016, Tilda Swinton returned to her beloved fans of the avant-garde image. The actress appeared on the screen bald and played the Elder in the comic-action movie "Doctor Strange." The heroine of Swinton is a Tibetan mystic who keeps an ancient secret knowledge of magic. She became the teacher of Dr. Strange (Benedict Cumberbatch). Choosing Tilda Swinton for the role of the Elder, who was most often portrayed as an Asian male in comics, caused a mixed reaction.

On the one hand, the reconsideration of the character in the form of a woman received positive reviews of the critics, smoothed the gender imbalance in the comic culture. On the other hand, the film was accused of the "whitewashing" of the heroes, as the head of the Tibetan community was a man with European appearance.

In 2016, the actress appeared in the main role in the psychological thriller "A Bigger Splash", and also played two roles of twin journalists in the comedy "Hail, Caesar!". 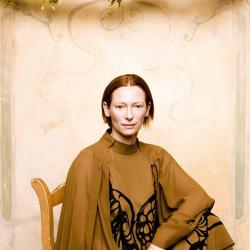