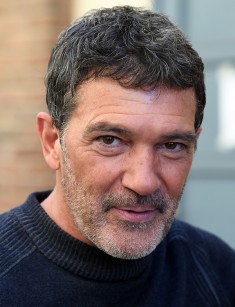 José Antonio Domínguez Banderas, an outstanding actor and director, was born on August 10, 1960 in Malaga (Spain). His father Jose Dominguez worked as an officer in the Spanish Civil Guard. Antonio’s Mother, Ana Banderas Gallego, worked as a teacher at school. Her surname the future great actor took as a pseudonym.

The first childhood hobby of Antonio Banderas was football. But he broke a leg, Antonio left a professional sport and switched attention to acting. One of the brightest impressions of childhood, which influenced the choice of his life, was the visit to the musical "Hair", which was staged by local actors. His first teacher was the famous actress from Malaga Guilhermina Soto, who was the head of the home theatre club, which was visited by Antonio.

Then followed studding at school of dramatic art in Malaga and classes in the theater studio "Dintel", headed by the Countess Angelis Rubio-Arguelles, the wife of the legendary Spanish playwright and director Edgar Neville.

At the same time young Antonio took part in the plays of the youth theater in Malaga, having received the first stage experience on tour with the troupe in Spain. At the same time young Antonio Banderas experienced the censorship of the totalitarian regime of Franco: for participation in the play by Berthold Brecht, the actor was arrested several times by the police.

At 19, Antonio Banderas, who graduated from the School of Dramatic Art, travels to Madrid to continue his acting career. There he tried many professions, even for some time he worked as a model. Soon the young man managed to enter the National Theater of Spain.

In Madrid, Antonio actively participated in the experimental performances of La Movida Madrileña. At this time, he was noticed by the great Spanish director Pedro Almodovar, and in 1982, Antonio Banderas received an offer to play in his eccentric comedy "Laberinto de pasiones." This film becomes the debut of the actor. His work with Almodovar formed Antonio Banderas as a professional, helped to gain his popularity, both in Spain and abroad.

In 1985, the film "Matador", the second film of Almadovar with the participation of Antonio, was released. The director does not refer this work to the number of his creative victories, but it can be considered a consolidation of the creative tandem of the great director and the brilliant actor. Together they worked on many films, including "La ley del deseo", which was nominated for Oscar as the best foreign film, "Mujeres al borde de un ataque de nervios" and the lyrical comedy "¡Atame!".

Relations between two masters of cinema spoiled for long 19 years, when Antonio Banderas gave up the role in the film of Almadovar "Kika", which the director considered an unsuccessful work. Instead of participating in this film, Antonio went to realize his dream and conquer Hollywood.

The first work of an actor in American cinema was the role of Nestor Castillo in the movie "The Mambo Kings." That status Antonio Banderas already had in Spain did not mean anything to America, and he had to re-conquer the audience. The decisive step was the film "Philadelphia" - the second American film of Antonio Banderas. Then there were further invitations, and the following years, Antonio Banderas was actively filmed in a variety of films.

One of the best works of Antonio Banderas in mid-nineties can be considered the western by Robert Rodriguez "Desperado", where Antonio played the main role along with Salma Hayek. The film "Mask of Zorro" brought the actor reputation as a star of the first magnitude. In this film, along with Banderas, Anthony Hopkins and Catherine Zeta-Jones are filming. The premiere took place in July 1998. The film received positive reviews from critics and reached the top of the rating lists of cinematography.

A year later Banderas presented to the public his first director's work "Crazy in Alabama". The film was not particularly successful, but played an important role in the creative development of Banderas as a director.

In 2011, Antonio Banderas again worked with Pedro Almodovar, playing the leading role in the film "La piel que habito." This masterpiece of the world art-house received prestigious international awards, including the British award "BAFTA" in 2012 for the best foreign film. The hero Antonio Banderas is an obsessive plastic surgeon, created for himself an ideal living doll.

The next appearance of Banderas in the work of the great director took place in 2013 in the film "Los amantes pasajeros." In the same year, Antonio appeared in the next action film of Rodriguez "Machete Kills", the continuation of the series of films "Grindhouse".

The popularity of the actor and his beautiful voice was appreciated not only in film works. It was Banderos who was the voice of the cult animated character - a cat in boots in the cartoon of the same name.

Banderas is not only a talented actor, but also a singer. The famous song from "Desperado" (Cancion del mariachi) is still a world hit. Over time, Banderas was invited to the musical "Nine" on Broadway.

Antonio Banderas supports the Socialist Party of Spain, the football club "Malaga", produces his brand of toilet water for men and is the owner of the motorcycle racing team. Winemaking is serious passion of the actor. Antonio Banderas owns vineyards in Spain called "Anta Banderas". The actor loves his native city very much, characterizing his attitude to his native land as "love without a divorce."

In 2010, the University of Malaga gives the actor the title of "Honored Doctor".

In 2016, Antonio Banderas visited the Russian capital to take part in the charity project of Natalia Vodyanova, as well as present her own photo exhibition to the public. For a short visit, the actor managed to visit the TV program "Evening Urgant", where he told that in 2015 he was fond of fashion and entered the famous British college Cental Saint Martins. According to the actor, to become a designer is his old dream, although he is not going to stop his actor's career.

In spring 2016, it was announced the cooperation of the actor and the brand Selected. Banderas was the designer of the men's collection of the 2016/17 season, in addition to which his perfume for men could be released. In addition, during a visit to Moscow, the Spaniard arranged a 4-hour photo session for Maxim magazine. His model was the singer Anna Sedokova, who was more than happy, that she managed to work and get a kiss from a cult actor.

The actor is the owner of a star on the Walk of Fame in Hollywood, which he received for his contribution to the development of the film industry.

The first wife of Antonio was the Spanish actress Ana Lesa, whom Banderas met while working in the theater. The couple together participated in the films "Mujeres al borde de un ataque de nervios" and "Philadelphia". In 1995, the couple divorced. Antonio prefers not to name the reasons such a step. They did not have children.

In the same year, Banderas married the Hollywood star Melanie Griffith, whom he met while shooting in the film "Two Much." A year later, the daughter Stella del Carmen Banderas Griffith was born to the family of actors. In May 2014, after almost 20 years of marriage, the couple filed for divorce.

The divorce turned out to be scandalous, but Banderas did not remain alone for long. His choice was the Dutch financier Nicole Kempel. Banderas was seen in the company of a girl before the official divorce, on the basis of which there were speculations that it was the Dutch woman who became the reason of the divorce of the Hollywood couple.

In early 2017, the 56-year-old actor was hospitalized with pain in his heart. According to the world media, a heart attack occurred during training. After full examination, the doctors let the actor go home. According to the actor, his health could be affected by shooting in the movie "33". The plot of the film is based on real events, when the Chilean miners for several months remained under the rubble of the collapsed mine.

Banderas said that the shooting took place in a real mine in unfavorable conditions for health.

• Interview with a Vampire 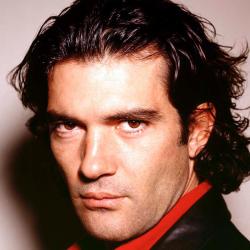