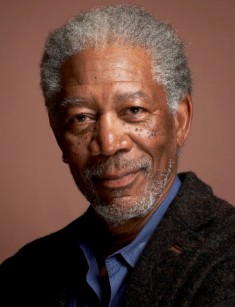 Morgan Freeman is an American film and sound actor. Freeman is considered one of the best Hollywood actors. He was nominated for Oscar four times. There are many prestigious awards, including a treasured statuette in his personal collection.

Morgan Freeman was born on June 1, 1937 in the American city Memphis. His mother worked as a cleaner, his father had a small hairdresser, but it almost did not bring income. Financial difficulties forced the family to move in search of a better life. Morgan had to live in Greenwood, Gary and Chicago. In Chicago, he first came on the stage. He got the role in the school play, with which Freeman coped magnificently.

That first experience helped him decide on the future profession, but firstly he had to finish school and join the army. Five years in the Air Force made his character stronger - he went for his dream in Los Angeles.

Morgan Freeman studied at the acting courses, simultaneously earning a living as a clerk in a public college. His first role was in one of the Broadway productions. It did not bring fame to the beginning actor, but the directors noticed him.

Fame came to Freeman in 70s, when he starred in the popular TV series "Electric Company." Then he got another role, but that was it. For almost nine years the directors forgot about Morgan. He explained this by the specifics of age in this job - the young actor did not interest them.

When Freeman was 43 years old he was invited to the film "Brubaker", in which he played an intelligent middle-aged man. The audience liked this image - in this role the actor was shot in the future.

In 1980-1986 four films with his participation - "Mary", "Now and Then", "Teachers", "Resting place", were released. In 1987, Morgan Freeman appeared in the role of Fast Black in the movie "Street Smart". Critics called his work breakthrough. For this role, the actor was nominated for two awards - "Golden Globe" and "Oscar", but did not receive them.

In 1989, the Golden Globe was in his home collection for the film "Driving Miss Daisy." Since that period, Morgan often appeared in the films of famous directors. The film "Unforgiven" with his participation received "Oscar" in the nomination "Best Film of the Year".

In 1994, Morgan Freeman for the third time becomes a nominee for "Oscar" - this time for his role in "The Shawshank Redemption," but again he didn’t win the prize. The long-awaited statuette actor received in ten years - for his role in the film "Million Dollar Baby", during the filming of which he worked with Clint Eastwood.

In the same period Morgan Freeman played in the comedy "Bruce Almighty". And although the role of the main character played a star comedian Jim Carrey, Morgan Freeman got the role of God. According to the plot of the picture, God was tired of the constant claims of people and handed over his own supernatural powers to the man Bruce to prove to mankind how difficult his job is.

In the creative biography of the actor there are more than 70 roles. Many films with the participation of Morgan Freeman became real hits. At the same time, the actor appeared on the screen, and also read offscreen text or voiced characters.

In 2005, the voice of Morgan Freeman was spoken by the narrator in Steven Spielberg's film The War of the Worlds, an open adaptation of the novel of the same name by Herbert Wells.

In the same year, the actor joined the franchise of films about Batman, filmed by Christopher Nolan on the basis of superhero comic books by DC publisher. Freeman played the role of the genius inventor Lucius Fox, who supplied the superhero with technical innovations, from the bat suit to a network of the city cameras. He played in the films "Batman: The Beginning," "The Dark Knight" and "The Dark Knight: The Renaissance of the Legend."

The following year, Morgan Freeman and Jack Nicholson played in the comedy "The Bucket List." The film was the first in a series of comedies on the death theme, which began to appear almost every year. According to the story, the heroes, having learned about the imminent death because of the illness, made a list of thinks that they would like to make before they die. The lists include insane acts and pleasant impressions, such as skydiving or trips to Hawaii, which give the characters the opportunity to enjoy their life.

In 2008, the actor played the head of the mysterious "Brotherhood of Weavers", the secret organization which prepared killers. The main roles in the action movie were also played by Angelina Jolie and James McAvoy.

In 2009, Morgan Freeman played a biographical role. The actor appeared in the image of Nelson Mandela in the film "Invictus", which was based on the struggle between Mandela and the policy of apartheid. In the center of the plot lies the real episode of this struggle, connected with the events during the 3rd World Rugby Championship in 1995.

In 2010, the actor again starred in the film, based on the comics. This time, Morgan Freeman played a retired CIA agent in the action comedy "RED", based on a comic book by Warren Ellis and Callie Hamner and also published by DC publisher.

In the same year, Morgan Freeman became the host of popular science channel of the Discovery channel "Through space and time with Morgan Freeman," which is also referred to in other translations as "Through the Wormhole with Morgan Freeman " or "Through a wormhole." In the program, the actor acts as a narrator and shares with the viewers scientific facts about the universe, the cosmos and new discoveries.

In 2013, the actor played key roles in two blockbusters. In the action movie "Olympus Has Fallen" the actor played the role of Speaker of the US House of Representatives Allan Trumbulla. At the center of the film is the attack of Korean terrorists on the White House, which leads to the power of Allan Trambull, and terrorists have the opportunity to launch nuclear warheads. Only the former agent, already dismissed for not saving the First Lady, can interfere with them.

In the crime thriller “Now You See Me”, Freeman played the former magician Tadeusz Bradley, who exposes the illusions of the main characters - the criminal quartet Four Horsemen, who, with the help of tricks, made the bank robberies.

The actor does not talk about his personal life - he believes that the publication of such information in the media takes away part of his life.

Morgan Freeman had four wives, but all marriages broke up. The last wife left the actor allegedly because of his passion for the adopted 27-year-old granddaughter, I'Dene Hines. Morgan denied this information, saying that these are rumors.

The Hollywood star has 4 children: Alfonso, Saifoulaye, Deena and Morgana. He has good relations with them. Deena is the daughter of his wife Janette Adair Bradshaw from the first marriage: Morgan Freeman adopted a girl, and she has his surname.

In 2016, the actor played Sheikh Ilderim in Timur Bekmambetov's epic film Ben-Hur, the adaptation of Lew Wallace's novel Ben-Hur: The Story of Christ and the remake of the 1959 film of the same name.

In 2016, Freeman appeared in two sequels of the 2013 films: the actor returned to his famous roles in the films "Now You See Me 2" and "London has fallen", the continuation of the "Olympus Has Fallen".

In 2016, the actor again appeared on TV. Morgan Freeman played in the documentary series "The story of God", filmed with the channel National Geographic Channel.

On April 7, 2017 the premiere of the comedy "Going in Style", in which Morgan Freeman played the main role. The film is also a remake of the 1979 film of the same name. Three pensioners, whose savings are appropriated by the bank, decided in revenge to rob this very bank.

In 2018, the actor will appear in the role of Drosselmeyer in the film “The Nutcracker and the Four Realms”. In the same year, Morgan Freeman will play in the thriller "Fallen Angel."

Today, also announced the shooting of Morgan Freeman in the action movie "M" and the comic thriller "Cold Warriors". The dates of their premiere have not yet been set. 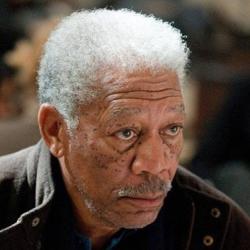