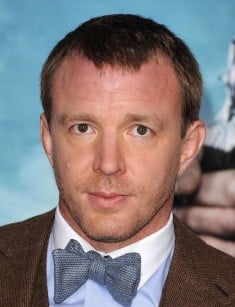 Guy Ritchie is a British film director, screenwriter and producer. Guy was born in September 1968 in the old Hatfield, which is 20 miles north of London. The future director had a respectable family: John Richie, Guy's father, had the prestigious position of executive director of a well-known advertising company. When his son was 5 years old, the parents divorced. Soon after the divorce, his mother married Sir Michael Lython for the second time. The family settled in an old manor of the XVII century.

The future director and producer was a dad student. From childhood, he had a rare disease - dyslexia. Guy slowly recognized the words in the text, so he did not read and wrote words correctly. At the age of 15, the guy dropped out of school and went to the film studio: the dream to make films appeared at a young age after watching the film "Butch Cassidy and the Sundance Kid." At the studio Richie got a job as a courier. The boy did not consider it was necessary to study. According to the deep conviction of the future creator of the film "Lock, Stock and Two Smoking Barrels", in universities they produced "standard" and dull directors, and he wanted to shoot brightly.

Guy Ritchie studied independently. Behind the back of the British master there are no specialized educational institutions that would help to master this direction. The young man had enough experience, taking knowledge from eminent colleagues. Initially, Guy created commercials and music videos. When he realized that he was already to shoot films, he made a short film "The Hard Case." From this film begins the creative biography of Guy Ritchie.

The 20-minute film was released on screens in 1995 and received pleasant reviews. Sting liked the film. The performer was impressed by the author's handwriting and energy of the young director. And also the absence of blood and cruelty on the screen. Richie managed to portray violence without naturalism, adding his ideas.

Then Guy Ritchie made the second film. The script for the future film "Lock, Stock and Two Smoking Barrels” was written by the director himself. Fortunately, at that time there were already computers, and they had a program that corrected grammatical errors. But the young creator faced one more difficulty: no one wanted to finance the film of an unknown director without solid experience behind him. Three years, Guy Ritchie carefully selected the cast and rehearsed every moment of the future film. The director managed to persuade the sponsors to invest in the shooting, and the work began.

The film appeared on the screens in 1998 and Guy Ritchie became popular. Sting appeared in the film. The film was a huge success, and nowadays it is considered a cult film. "Lock, Stock and Two Smoking Barrels" is a low-budget film. The creation of the film cost only £ 1.5 million, which is considered a very modest sum.

The film was called the European response to Quentin Tarantino. The British was compared to his American colleague Quentin Tarantino, and this is not surprising. Stylistics of work, as well as approaches to the plot is similar. Ritchie himself claims that in his films there is no excessive violence, in comparison with Tarantino’s films. So his works are softer, but not less bright.

Guy Ritchie had no problems with the financing of the next film. In 2000, the film "Snatch" was released. Brad Pitt starred in the title role. It was reported that the American himself asked the director to give him a role, as he was strongly impressed by Richie's previous film. "Snatch" finally cemented the glory of Guy, made him a great director and brought another wave of audience love as well as income.

Representatives of the world cinema community appreciated the film, calling the work the best in the creative biography of the director. Stylish, bright, with a memorable soundtrack and humor, this film was created in the tradition of black comedy.

In 2001, Richie began to shoot the film "Swept Away", the main role in which played the singer and his wife Louise Ciccone, known as Madonna. Critics crushed the film. The audience did not like the film also. The film was a failure. The director painfully took this result, for a while he even stopped working.

Another movie "Revolver" by Richie was released in 2005. In general, this detective movie was successful, although critics took the picture cool. But the spectator's success helped Richie regain his lost confidence and to shoot the next film. In 2008, the comedy "Rock-n-Rolla" came out on the screens, and was warmly received by the audience and film critics.

The following year, fans of Richie's talent enjoyed the new creation of the director, in which the filmmaker appeared as an actor. The picture "Sherlock Holmes" brought the British a new portion of fame and the status of a new face in the cinema of Great Britain. Success inspired the director to shoot the continuation of the film "Sherlock Holmes: The Game of Shadows." The film was released in 2011.

The role of the detective was played by Robert Downey Jr., and the role of Dr. Watson played Jude Law. Stephen Fry played Mycroft, the elder brother of the main character. The role of Professor Moriarty went to Jared Harris.

In 2013, Guy Ritchie planned to shoot the adaptation of the book by Thomas Kelly "Rise of the Empire." The book tells about the love triangle, and the story develops during the construction of the Empire State Building in New York (at the turn of 20's and 30's of the twentieth century). But the director's plans broke; the film did not appear on the screens.

In August 2015, there was a premiere of the new film "The Man from U.N.C.L.E" by Guy Ritchie. This film is based on the series of the same name of 60's. The plot is based on the battle between the CIA and the KGB, whose agents compete with each other.

Guy Ritchie also creates commercials. In 2001, a video about the BMW M5 hit the top 20 expensive commercials in the history of advertising.

In 2001 the advertising agency Fallon created a series of 8 online movies “The Hire” for BMW. The videos were shown on the Internet and on DVD, and few years later the series became an exhibit of MOMA. Soon critics will say that the short 9-minute film of Guy Ritchie has revolutionized the advertising industry. For the first time the art commercial was shot, and the advertising campaign was focused on Internet users.

The film "King Arthur: Legend of the Sword", released in May 2017, has already become a topic of discussion. Nevertheless, critics reacted to the new film ambiguously. Richie constantly shot fighters and criminal dramas, but this time he decided to create a different film, which is not similar to other works.

The picture tells of a young Arthur, trying to defeat Vortigern (played by Jude Law), who wanted to seize the British throne. Vortigern is the most intelligent character of the film, but the Celtic king turns out to be the main bastard.

Arthur is a simple and honest patriot of the country, who is ready to protect the weak and disadvantaged. Arthur is the legitimate heir of the throne and the only one who is able to pull the Excalibur out of the stone. Arthur can pull the weapon, but it's not so easy to control this magical miracle. Nevertheless, the hero of the film will master Excalibur and start with incredible energy to crush their enemies.

This film tells about the internal struggle of a man. Such a concept of criticism was called fascinating.

The director told the media how the film "King Arthur: Legend of the Sword" has changed during filming, as well as why he likes to shoot football players and is not ready to shoot political manifestos. According to the producer, it is important to understand the genre to create a film, to study the script, so as not to violate the boundaries and norms invented by others. According to Richie, the films of the historical genre are less defined, but within this circle one can improvise.

In this film, the acting debut of football player David Beckham took place. British viewers ambiguously perceived the participation of the athlete in the film, criticizing the director for the fact that he invited Beckham.

The filmmaker notes that for David the picture was the start of a cinema career, so the actor has chances to become a professional in the future. Earlier, Beckham posted a photo with makeup, as well as a short video from the new film in Instagram. The actor Charlie Hannam, the main actor, said that it's nice to work with Beckham. According to the actor, the athlete was quiet, modest and serious on the set.

If "King Arthur: Legend of the Sword " will be successful it will be the first in a series of films about the heroes who once gathered at the Roundtable.

Guy Ritchie and Madonna met thanks to Sting and his wife Trudi. In December 2000, the wedding took place; the singer became the wife of the British director. The ceremony was held as close as possible, there was a limited number of guests. The ceremony was designed in Scottish tradition and took place in the ancient castle Skibo (Scotland).

In August 2001, their son Rocco was born. And in November 2008 Guy and Madonna divorced.

Guy Ritchie is full of creative plans and is shooting new films. In 2017 the adventure film based on the legends of King Arthur appeared on the screens, and the premiere of the film "Aladdin" is planned for 2018.

Guy Ritchie creates a film, which differs from his other works. The British producer has repeatedly created impressive films, which became masterpieces of world cinema. Gradually the director changed the approach, and created less criminal dramas. The director had the idea to realize a completely new idea and is ready to create something more than just "gangster quarrels in London".

It is known that the producer of "Aladdin" will be Dan Lin, who worked in the same position on projects "about Sherlock". The Lin Pictures company is already developing an ambitious and not traditional interpretation of the history of Aladdin. Guy Ritchie was the best candidate for the film.

In 2016, British media reported that Guy Ritchie plans to build a brewery within the estate, which is located in the county of Wiltshire in the south of England.

The production will be located in Ashcombe House - the English manor of the director. This house is often visited by British celebrities by the football player David Beckham and head coach of the English club "Manchester United" Jose Mourinho.

It is assumed that Richie intends to produce classic beers, including traditional English ale. Guy noted in his address to the local council that "in hard for the pub industry times, companies which sell real ale have a better chance of survival than those who do not sell the drink."

Richie intends to supply restaurants and pubs with alcoholic drinks located near the estate, and plans to export beer to other states. Richie has already registered several beer brands - Bitta Ritchie, Punchbowl Ales and Ashcombe Ales.

In 2016, Guy Ritchie appeared in the video, supporting soldiers. The essence of such a campaign is to support veterans of the war, who today feel themselves thrown out of ordinary life.

"22 push-ups for 22 days in honor of 22 soldiers who risk their lives every day. The first day I did it at 22,000 feet above the ground, " boasted the British director.

• Sherlock Holmes: The Game of Shadows

• King Arthur: Legend of the Sword 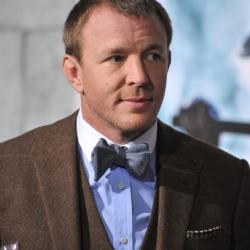