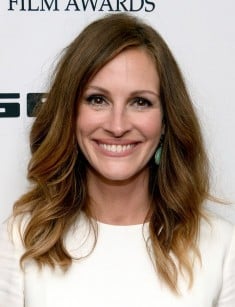 Julia Roberts was born on October 28, 1967 in one of the hospitals of the American town Smyrna, located in the northwest of Georgia. Julia's mother Betty Lou Bredemas was an actress and, together with her husband Walter Grady Roberts, taught acting classes for children in their hometown. Besides Julia, there were two other children in the family: Eric and Lisa. All the children in the family followed in the footsteps of their mother and become actors in Hollywood.

After the birth of Julia, Betty was forced to quit her job, which had a negative impact on the well-being of the family. The situation was saved by Coretta Scott King, a widow of the famous fighter for the rights of black Martin Luther King, whose children attended the theater school of the Roberts’s. It was Coretta who paid first hospital bills of the young mother.

When the girl was five years old, her parents divorced. Julia and Lisa stayed in Smyrna with their mother, while Eric and his father moved to Atlanta. Soon, Betty Lou Bredemas married the critic Michael Moots. Michael turned out to be a cruel man; he drank and beat his stepdaughter Julia and Lisa. Because of her stepfather, the young Roberts constantly quarreled with her mother.

The future star was a dreamy child. In childhood Julia believed that she knows how to communicate with animals, and this faith inspired her. The girl dreamed of becoming a veterinarian. At school, Roberts tried to be not like everyone. She wanted to feel special, although she did not have special talents at first. Julia played the clarinet, took part in local theater productions, inspired by the successful theatrical career of her brother Eric Roberts.

When Julia was ten years old, her father died of cancer. The girl did not know that Walter was sick, although she spoke with him on the phone almost every day. After many years, the actress admitted that even after her father's death, she continued to communicate with him in her dreams.

At thirteen, Roberts went to her first job at a pizzeria. Until the end of school, she worked part-time in a shoe store, then in snack bars and cafes. After leaving school, the young girl tried to enter the University of Georgia, but failed. Then Julia moved to New York to her sister Lisa and went to acting courses.

In her first film project, the young actress participated thanks to her brother Eric. In 1987, Julia's elder brother played the main role in the melodrama "Blood red". Eric offered his sister the episodic role of the farmer's daughter, which practically did not require any acting skills. Then Julia took part in the shooting of the film "Satisfaction", where she played the role of a rock singer. For the sake of this small role, the actress has learned to play musical instruments. In the same year, the young Roberts got her first big role: she played a waitress of a cafe in the romantic comedy "Mystic Pizza".

The next film of the rising star of Hollywood, which brought her closer to world recognition, was the film "Steel Magnolias." The story tells about the life of six women, in particular, Shelby Latchchery, which was played by Julia. For this role, the actress received the Golden Globe Award for Best Supporting Actor and was nominated for Oscar.

In 1989, Julia Roberts took part in the filming of the movie "Pretty Woman" by Harry Marshall. Producers were looking for the famous Hollywood star for the main role of the film, where young Richard Gere played, but Marshall insisted on the candidacy of Miss Roberts. Julia was not immediately invited to the project, first from the role of Vivienne Ward refused Karen Allen, Meg Ryan and other Hollywood actresses. Many of them considered it beneath their dignity to play the role of a prostitute.

On the set of the film, the story had to be rewritten: Roberts' popularity grew so rapidly that the director did not dare to make a gloomy ending to the film. After the release of "Pretty woman", the young actress received the status of a Hollywood star, and also won the second "Golden Globe" and the nomination for Oscar for Best Actress.

The star status of the actress opened doors to other serious film projects, she was offered the best roles, and her fee of three hundred thousand dollars (Julia earned for the role of Vivienne Ward) turned into millions.

In 1990, four films with the participation of the actor were released: the thriller by Joseph Ruben "Sleeping with the Enemy", the melodrama by Joel Schumacher "Dying young", the criminal thriller by Alan Pakul "The Pelican Brief" and the fantasy fairy tale by Steven Spielberg "Hook". And although the films turned out to be financially successful and were warmly received by the audience, none of them could achieve the popularity of "Pretty Woman".

In 1996, the film by Stephen Frears "Mery Reilly" was released, where Julia Roberts played the main role. The box office of the film did not even cover the cost of its creation, and Roberts was nominated for the first time in her career for "Golden Raspberry" as "The Worst Actress".

A year later, the actress decided to start with "dark" projects. She played the role of a culinary critic in the romantic comedy "My Best Friend's Wedding". The public and critics took the film more than favorably.

The next significant film in the career of the actress was the biographical film "Erin Brokovich" by Stephen Soderbergh. Julia played the role of the main character Erin Brockovich, the defender of human rights, fighting against environmental pollution. The picture becomes a hit and brings to the star of Hollywood her first "Oscar" Statuette.

The actress does not cease to play in the big cinema; she is invited to many famous projects. In 2012, Julia Roberts took part in the filming of the comedy "August: Osage County", where she played along with the famous Meryl Streep. Film critics were delighted with the actor's play, and the actress was again nominated for many popular American film awards.

Today Julia Roberts is one of Hollywood's most highly paid actresses. In 2010, the movie "Eat, Pray, Love" by Ryan Murphy was released. The film tells about a married woman named Elizabeth, who went on a journey around the world. She tried to find herself in India and Indonesia. After the release of the film, the actress confessed that she was a Hindu in religion.

A year later, the film "Larry Crown" appeared on the screens, in which Roberts starred along with Tom Hanks. The film was ambiguously received by critics, as well as the newer work of the actress in the film "Money Monster", where Roberts played along with George Clooney. However, unlike the film itself, Roberts' play was highly appreciated.

In 2017, Julia Roberts was again nominated for the Golden Raspberry Award as "The Worst Actress", but for the role in another film - the comedy "Mother's Day".

Julia Roberts has become a famous person in Hollywood, not only thanks to the movie, but also to her relations. She was dating such famous actors as Matthew Perry and Liam Neeson.

On the set of "Steel Magnolias" Roberts fell in love with her film partner the actor Dylan McDermott. There were rumors that the couple even got engaged and will soon be married. But the wedding did not happen, and the actress was increasingly noticed in the company of Richard Gere. New gossips appeared about the personal life of the movie star.

During the filming in the movie "Flatliners" Julia met the Canadian actor Kiefer Sutherland. Lovers actively gave interviews to the press, telling about their love at first sight. Julia and Kiefer set a date for the wedding, but three days before the grand event in the newspapers appeared compromising photo of Sutherland with an unknown girl. After this, the couple broke up.

In 1993, Julia Roberts married the country singer Lail Lovett. The newlyweds were familiar only three weeks before the wedding, and spent the whole family life on the road. Two years later, the couple decided to break up.

About two years the Hollywood star had relations with the actor of the series "Law and Order" Benjamin Brett. By that time, the actress tried to keep the press away from her personal life, and little is known about the details of their relationship. Brett wanted a full-fledged family and children, and Roberts completely devoted herself to the career of an actress.

On the shooting of the picture "Mexican" Julia met her future spouse, the operator Daniel Moder. At the time when their relations began, Moder was still married. In 2002, Danny divorced with his wife, Vera Steiner-Moder. In the press there were rumors that the famous Julia Roberts was forced to pay the former wife Modera "compensation" in order to speed up the divorce. In summer of the same year, the couple had a magnificent wedding.

Two years later born twins - the boy Phineas Walter (in honor of Julia's father) and the girl Hazel Patrisha were born to the family. Julia started raising children at her ranch in Taos, New Mexico. In 2007, she gave birth to another child, Henry Daniel.

Julia Roberts is a hairstyles trendsetter. On large screens, she appeared with a mop of red hair, and then many times changed hair length, their color, hairstyles, appearing on the screen with a bang and without, with a "bean" and "cascade," with a high beam or "shell". After she enjoyed the experiments in youth, today the actress prefers the classical haircut.

Roberts is not only a loving mother of three children, but also a caring aunt. It was Julia who played a big role in the future of her niece Emma Roberts, the daughter of her brother Eric, who also became an actress. After the scandalous divorce of her parents, Emma remained with her mother homeless, and it was her aunt who helped the woman with the child. In the future, she always cared about her niece and even told her not to marry the actor Evan Peters, arguing that it was not worth taking such a serious step in her life at such a young age. It is known that the couple eventually got engaged, but in the beginning of 2016 finally broke up.

There was a scandalous story with Roberts associated with the death of her half-sister Nancy Mouts. She negatively spoke of Roberts, who supposedly joked about her sister.

According to the official version, 37-year-old Nancy Moots died of a drug overdose, although American tabloids think that this was a suicide. In the suicide note, three pages were devoted to the half-sister, where Nancy accused Julia of unwillingness to communicate with her, in the prohibition to see her sick mother. Roberts did not comment on her sister's attacks after her death, canceled her participation in all recreational activities and, according to eyewitnesses, burst into tears at the funeral.

Now the actress lives with her husband and children in a penthouse in Manhattan. Julia Roberts is the owner of the film company and is engaged in charity.

• Fireflies in the garden 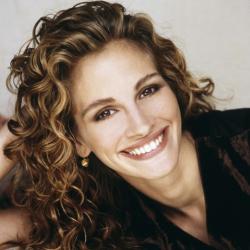