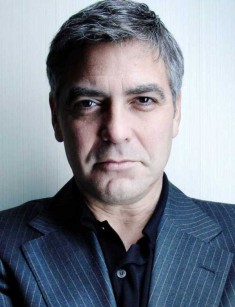 George Clooney is an American actor and director, winner of the Oscar and Golden Globe awards. Also, Clooney is a businessman and public figure. In 2009, Time magazine brought the actor to the list of 100 influential people.

George Clooney was born on May 6, 1961 in Lexington, a large American city located in the east of the country. He was the second child in a stellar family. George's parents were public people: the father Nick Clooney was a famous American journalist host his own talk show on one of the cable channels. The mother is the former beauty queen of the United States. George Clooney is a descendant of Abraham Lincoln (he is the grand-nephew of the 16th US president).

The first debut of the future Hollywood star was the appearance in his father’s program. The audience liked a sweet, charming child. Later, Nick Clooney often spent his show with a young talent.

The actor recalls his childhood with nostalgia, but there were also negative moments. The family had to move often in search of a better job for their father, sometimes they felt very bad. Bad time for George Clooney was studying in high school. At this period he was struck by Bell's palsy, a genetic disease he got from his father. As a result, the left side of the face was paralyzed. The real nightmare was the reaction of his classmates - he became a victim of constant bullying and received the nickname Frankenstein. Fortunately, the disease was cured.

After graduating from school, George Clooney visited the Northern University in Kentucky and the University in Cincinnati for a while, without completing any of them. An attempt to realize himself as an athlete (the actor was fond of baseball) also did not bring results. As a result, a year after unsuccessful search for work, he decided to move to Los Angeles - here his acting career began.

In early years of the creative biography of George Clooney, there was a bitter disappointment. He failed casting after casting, experienced money difficulties, and had to work hard to earn a living. But George continued to believe in his inevitable success, and at last he won.

In 1994, he appeared in the cult series "ER". Since that moment his career began to develop, he was called a rising star. The multi-part film gained great popularity among the Americans.

In 1996, Clooney debuted in the feature film "From Dusk Till Dawn", which became his ticket to the world of big cinema. High (the actor's height is 180 cm) and impressive man began to regularly get the roles of both millionaires and scammers.

Also, it should be mentioned the following film of the actor - superhero action film "Batman and Robin" by Joel Schumacher, released in 1997. In this film, George Clooney played the main role of Batman.

The film is famous among fans of comic and superhero action films and today: "Batman and Robin" is considered the worst superhero action movie. Also critics and magazines about cinema and geek culture criticized this film and called it the worst film of all time. "Batman and Robin" received 11 nominations for anti-prize "Golden Raspberry", including the worst film of the year. The audience criticized the film for a not interesting script, bad play of actors and a toy kind of movie.

After the failure of "Batman and Robin" rights holders had to cancel the shooting of the fifth part and to restart the Batman franchise, giving the plot to the director Christopher Nolan.

In 2002, Clooney first worked as a director, creating the film "Confessions of a Dangerous Mind."

The actor also became one of the creators of the films "Unscripted", "The Monuments Men", "Good Night and Good Luck", "The Ides of March". The premiere of the latter took place in 2011, bringing the "Oscar" for the best adapted script.

In 2012 George Clooney worked as a producer of the thriller "Argo", for which he won another Oscar statuette along with Ben Affleck and Grant Heslov in the nomination of "the Best Film".

In 2015, the main work of the Hollywood star was the role in the film "Tomorrowland".

The personal life of George Clooney is no less interesting than his filmography. The women who owned the heart of the actor are as bright as his films. In 1987, the actor began relations with Kelly Preston. In memory of their relationship, George left the house hog Max, who was a faithful friend of the actor and even slept in his bed.

The first wife of George Clooney was Talia Balsam, whom he married in 1989. In 4 years the couple broke up, not explaining the reasons for the divorce. The actor suffered and promised himself never to marry again. As time will tell, he will not fulfill his promise.

During filming in Paris in 1996, George Clooney met the student of the law faculty, who worked as a waitress, Celine Balitran, who was 23 years old. Soon the lovers announced their relationship. This relationship was short, but bright.

In 2009, George Clooney met the charming waitress Elisabetta Canalis, who now works as a model. Their relations were very stormy, the lovers even thought about children, but unexpectedly broke up in 2011.

The attorney Amal Alamuddin appeared in the life of Clooney in 2013. Fans immediately became interested in the nationality of Clooney's wife. Enthusiasts saw the eastern roots of the woman: Amal is from Beirut, belongs to the small Arabic-speaking nationality of Druze. This people have a specific religion, combining elements of Islam and Buddhism. But, according to the media, Amal has a secular way of life, which is confirmed by photos in Instagram. Alamuddin graduated from New York University at the faculty of international law and human rights, later she began working as a lawyer.

In September 2014 in Venice, the couple got married. The wedding celebrations lasted three days.

In 2016, the actor played the main role in the comedy of the Coen brothers “Hail, Caesar!". The film is based on real events and shows the life of Hollywood in 50s of last century. Suddenly, the performer of the main role disappears, and soon after that the organization "The Future" sends a note to the studio demanding a ransom. Eddie Manniks, a Hollywood fixer - a man, who pulls actors and other stars out of scandals, - had to find the missing actor before the paparazzi will learn about it.

The main roles in the film were also played by Josh Brolin, Channing Tatum, Tilda Swintony and Rafe Fiennes. Film critics took the picture warmly, noting that the directors managed to move from dramas to comedies.

In 2016, at the Cannes Film Festival, there was a premiere of the psychological thriller "Money Monster". George Clooney played the main role of "Money Monster" TV presenter Li Gates. During the program, the character on-air counseled the audience in commerce, talked about the internal world of Wall Street, gave advice on playing on the stock exchange, recommended making certain deposits or buying shares. George Clooney's partner in the shootings was Julia Roberts, who played the role of the director of the telecast.

The plot of the thriller begins with the fact that the crew of the "Money Monster" were took hostage by the viewer. He went bankrupt after buying shares of "IBIS Clear Capital". The role of the investor was played by Jack O'Connell.

The film received mixed reviews, critics called the film unnecessarily sentimental and predictable. After this film George Clooney took a break in filming, devoting time to family and a new hobby. Since mid-2016, there were no new films with the actor.

On June 6, 2017 George Clooney became a father for the first time. The wife of the actor Amal gave birth to a boy and a girl. The kids were called Alexander and Emma.

At the end of June, journalists learned about a profitable deal of Clooney. The actor sells his own brand of American premium tequila "Casamigos". The British premium alcohol producer Diageo offered $ 1 billion for the brand.

The name of the Cluny brand is translated as "House of Friends". Originally was just a hobby. George Clooney and his two friends - Rand Djerber, husband of Cindy Crawford, and the developer Mike Meldman - organized the project to make tequila for their own consumption and built villas in the Mexican state, Baja California.

Friends did not plan to make profit of the brand and began to give bottles to friends. And then their friends wanted to buy more. The company was growing up. The founders of the company received a license for the production and sale of alcohol. In the interview, the partners said that this was a forced measure, not a deliberate step on the way to the alcohol business. The distilling tequila company refused to make new shipments without a license, as the company could no longer send thousands of bottles and call it "samplers".

George Clooney and his friends will receive $ 700 million immediately after the deal closes, another 300 will be paid within ten years. Clooney, Gerber and Meldman will be the directors of Casamigos, in addition, “Diageo” plans to use the actor's popularity for the tequila promotional campaign. 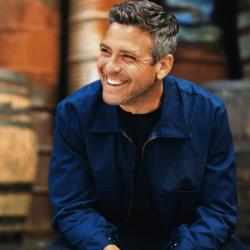