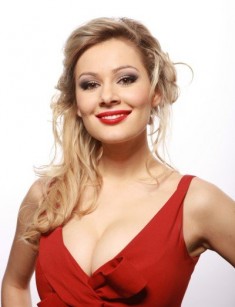 Maria Kozhevnikova has become popular due to her role in the youth series Univer. But there burst out the real sensation around Maria when she decided to combine her acting career and political activity. Most people didn't believe that Maria Kozhevnikova who had performed the role of the easy-going student on the screen could cope with the politics. But the actress has become the member of the State Duma with dignity and has entered the lists of the most influential Russian women. At the same time, Maria hasn't left her acting career; she began to appear on the big screens and to take part not only in light youth movies but the historical dramas as well.

Maria Aleksandrovna Kozhevnikova is a native resident of Moscow. The Russian actress was born on the 14th of November, 1984. Maria's father Alexander Kozhevnikov is a well-known Russian hockey player, the Merited Master of Sports and two-time champion of the Olympic Games. Her father’s achievements have always been an example for small Masha.

There were almost no doubts that Maria Kozhevnikova would connect her life with the sport. At some point this has happened: the girl became the Master of Sports in Rhythmic Gymnastics. However, Maria’s curvy shapes prevented her from continuing her career in the sport. The girl has a medium height, we can say, even small, but at the same time, she distinguished with the strong constitution. Kozhevnikova was far from being plump, but her figure wasn't ideal for this kind of sport.

The future TV star remembers her childhood with a smile. By the words of Maria, she was a very stubborn girl, but anyway she has always managed to delight her parents. Little Masha has never refused to help her mother; she has been polite with everyone. Also, she preferred playing outdoor games, liked reading verses and dancing. Even though she had lots of training, Kozhevnikova never forgot about her studies in the school.school.The girl studied well all the time and was responsible for the completion of the home tasks.

When Kozhevnikova decided to leave the sport, she made up her mind to start the acting career. Maria entered the Russian Academy of Theatre Arts. At that time she was combining her studies with the participation in the music band Love Stories in which Masha began working in 2002. Unfortunately, the group hasn’t managed to become popular on the musical Olympus, and Maria dedicated all her time to the acting.

In the beginning, Kozhevnikova received only episodic roles. In 2002 she was lucky at last to get a receive a small role in the series Rublyovka Live. She also took part in the series God’s Gift and Heartbreakers. But Kozhevnikova hasn't gained the desirable fame after these roles.

Maria Kozhevnikova’s career began to take off with the series Univer. The actions take place in Moscow dorm, and the students' life becomes the plot's line. Then Maria has brilliantly passed the casting for one of the major roles of the blonde girl Allochka. The character of Kozhevnikova is a greedy and unprincipled girl who doesn't distinguish with the intelligence at all.

This sitcom about the life in the dorm has greatly impressed the spectators and has become one of the most popular series of TNT channel for all time of its existence. Due to this role of temperamental Alla Grishko the actress has gained popularity and has become a real sex symbol. Maria Kozhevnikova's photos began to appear in many domestic glossy magazines. Moreover, the actress even took part in the shooting for Playboy magazine. On the eight shots published in the magazine, Maria appeared completely naked.

Masha admits that she has something in common with her screen heroine. Both of them manage to get into unfortunate situations. The actress in some strange way constantly gets bruises, injuries, and cuts. But in everything else the girls are different. Kozhevnikova has got used to work on herself and to achieve everything with her efforts, unlike her temperamental character.

This series has not only revealed the acting talents but also discovered the musical skills of Maria. Together with the performer of Kuzya’s role - Vitaly Gogunsky, Kozhevnikova recorded the song "Who If Not We. " The actors were repeatedly asked to sing this composition at different actions. Kuzya and Alla's song has become extremely popular.

In 2012 Maria surprised her admirers with her bitchy role in the picture Soulless. The majority of the spectators said that the girl had performed the role of the tramp. But the actress doesn't consider this role inadequate as she thinks that the real actress should be able to embody versatile images.

In February 2015 in Russia, there was premiered the long-awaited movie Battalion directed by Igor Ugolnikov. In this picture, Maria got one of the leading roles of the participant in the combat of the First World War. In such a way Maria Kozhevnikova enriched her filmography with the most significant and serious part since the beginning of her acting career.

This story has real credible facts: at the initiative of the Provisional Government, there was received the decree on the creation of female battalions. Such a decision was destined to get the spirits of those who were in despair and didn't believe in the victory. Maria Kozhevnikova sacrificed her beautiful long hair for her role in the movie Battalion. The actress not only has had her hair cut and changed her long hair for short but also she has made up her mind for a more difficult step: she had her hair shaved. Right during the movie shootings, she had her hair shaved as well as many other colleagues on the movie set. Maria confessed that she was somewhat nervous at that moment. But this sacrifice was a worthy one: for the role in this picture Maria received the Golden Eagle award.

In 2011 Kozhevnikova became the member of the Young Guard of the United Russia political party. The same year she became the "trusted person" of the Russian People’s Front.

Since the 1st of October of 2011 Maria has become the member of the Trust Board of the orphanage No. 39 in Moscow region.

Already in December of the same year, Maria Kozhevnikova received the position of the deputy of the State Duma of the Federal Assembly of the Russian Federation of the VI convocation from the United Russia political party.

Maria Kozhevnikova has decided to come to the State Duma because of the stronger sense of justice and desire to help people. She has honestly worked for five years not just formally being present at the meetings but also offering and supporting different ideas and projects. Even being skeptical about Maria people have admitted that she broke the stereotypes about the behavior of the blondes and actresses.

Nevertheless, Kozhevnikova hasn’t entered the VII convocation of the State Duma. For a long time, there were rumors that Joseph Kobzon was going to hand over his mandate to her. He was impressed by her work. What about Maria, she repeatedly refused this news.

In 2014 she received the 88th position in the list of 100 most influential Russian women.

Maria Kozhevnikova’s personal life has changed after the premiere of the series Univer. The army of her admirers gathered at the windows of the actress. She gained more and more fans. In 2009 there appeared the rumors that Maria was going to marry the businessman from Chelyabinsk, the president of Mirel company.

Maria Kozhevnikova and Ilya Mitelman got acquainted in 2008 at the party dedicated to the series Univer in Chelyabinsk. Already in a year, the lovers applied to the marriage registry, but the wedding didn't take place. The actress couldn't bear the unreasonable jealous rages of Ilya and broke up with the potential husband.

Since 2010 Maria began a relationship with one of the heads of Moscow Manej complex. Their wedding was set for the beginning of 2011, but the relations with this gentleman also came to an end.

But in a short time, the actress managed to create a family. Her personal life has cardinally changed after the acquaintance with Evgeniy Vasilyev in 2011. Kozhevnikova with her husband Evgeniy Vasilyev got married only in September of 2013. Their children were born at the family quite in a short time. Judging by the date of birth of their firstborn, Maria was pregnant at the time of the wedding. At present, the lovers have two children. On the 19th of January, 2014 their first child Ivan was born. Almost in a year, on the 26th of January, 2015 Kozhevnikova gave birth to their second son Maxim.

The actress tries to keep her family life in a secret. She seldom publishes pictures of her husband and children and tries not to involve her relatives in the secular events.

After the childbirth, Maria couldn't force herself to take a break from her cinematic career. In 2016 the actress appeared in the extreme circus show under the title Without Belay. Answering the question about the motivation she confessed that after the birth of two babies one after another she needed to check herself and her body, to believe in her youth and forces. The judges appreciated the courage manner of carrying out the acrobatic performances despite not very young age and responsibility of the mother. They called Kozhevnikova an example and inspiration for many girls and women.

In June of 2017, Maria Kozhevnikova has become a mother for the third time. The actress gave birth to her third child in one of the Moscow. 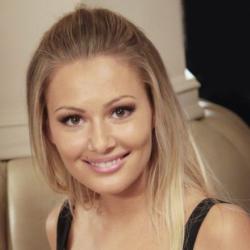