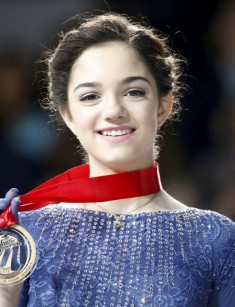 Evgenia was born in Moscow in November, 1999. Her father Arman Babasyan is an Armenian businessman, the girl's mother is a former figure skater. The surname Medvedeva went to Evgenia from her grandmother on the maternal side. The girl’s mother sent the 3-year-old girl to the figure skating section. Since then the sports career of Evgenia Medvedeva began. According to the biography of the figure skater, she did not have the usual childhood with puppets and games with the courtyard guys. Evgenia never wanted to leave the ice-skating rink.

The first coach of Evgenia Medvedeva was Lyubov Yakovleva. When she went on maternity leave, the young figure skater came to Elena Selivanova's group. In 2007 the parents decided to send the daughter to another coach - Eteri Tutberidze. According to Evgenia, at the age of 8 she was still a "raw" skater, who needed to learn a lot. And Eteri Georgievna made a lot of efforts in order to turn a diamond into a brilliant.

At the age of 9 Evgenia Medvedeva knew that her future life is connected with figure skating and sport. The girl has never dreamed of becoming someone else, but a figure skater.

Her persistence, dedication and diligence soon brought results. At the age of 12, Evgenia Medvedeva got into the Russian national team. In two years, in the 2013-2014 season, the girl got the right to participate in international junior competitions.

Medvedeva made her debut in Latvia, where the athlete performed at the Grand Prix among juniors. Evgenia won the first place. At the next stage of the competitions in Poland, the girl won again. In Japan Evgenia experienced the most severe competitions. Here the figure skater managed to win the third place. The first two places went to compatriots.

It did not take long for the talented figure skater to get new victories. Evgenia Medvedeva took part in the competitions of the championship of the Russian Federation in 2014. The young athlete managed to take seventh place among adult figure skaters and the fourth among juniors.

March of the same year was more successful: it brought "Silver" at the Russian Figure Skating Cup in the adult category. This victory and chance (the figure skater Adeline Sotnikova was injured) allowed the girl to participate in international competitions. Medvedeva participated in junior championship and received "bronze". Two first places again went to the Russian athletes.

The 2014-2015 season, was again successful for Evgenia Medvedeva. The figure skater won two rounds of the Grand Prix Cup in Barcelona among juniors. The victory went to the sportswoman and at the Russian championship for adults in 2015: Evgenia won the third place. But in the junior championship the girl won "gold". Medvedeva was sent to the second in her sports career world junior championship in Tallinn. And again she won "gold." This is the natural result of the titanic work and extremely difficult struggle of Evgenia.

In autumn, 2015 the athlete went to adult figure skating. Evgenia had an excellent result at the open international tournament in Slovakia - Memorial of Ondrej Nepela. Few weeks later, the figure skater brilliantly performed in the American Milwaukee, having passed the test of strength in the first adult competition in the Grand Prix series. Here Evgenia takes the first place.

The results of the competitions at the previous rounds of the Grand Prix allowed Evgenia to reach the final. In the Spanish Barcelona the figure skater won behind two strong rivals - Japanese Mao Asad and Elena Rodionova. And the gold medal is a worthy reward for a flawless result. Another "gold" was waiting for Evgenia Medvedeva at the Russian Championship.

In 2017 Evgenia will be 18 years old. The girl has a hobby, for which there is not much time left. Evgenia Medvedeva is fond of drawing. She says that if not figure skating, perhaps she would choose a makeup artist profession.

Evgenia Medvedeva has her own page in "Instagram", where the girl posts photos and videos from competitions and trips around the world. Evgenia was satisfied with the trip to Japan, which she told her fans in Instagram. The girl is a fan of anime culture, and even calls herself an otaku. In the Land of the Rising Sun, the figure skater performed several times in the image of Sailormoon. There is an official page of the athlete in "VKontakte", where the news from other accounts is posted.

On February 2, 2016 the Russian figure skater Evgenia Armanovna Medvedeva could not stop crying from happiness. At the European Championship in Bratislava Evgenia won the first place and climbed the pedestal. It is noteworthy that the other two leading places were also occupied by Russian skaters. The girls once again showed that Russian sportsmen are the strongest in this sport. Once again they proved that fact at the World Championship on March 28, 2016.

As a result of the 2016 World Cup, Evgenia Medvedeva takes the first place and becomes the world champion. At the show in Boston the girl scored 150.10 points and won her competitors. Evgenia broke the previous world record, which was set by the Korean Kim Yu Na at the 2010 Olympics, gaining 150.06 points. "Silver" in the championship went to the American Ashley Wagner, "bronze" went to Russia as a reward of Anna Pogorila. Overall Evgenia scored 224.86 points at the Championship. This season, the figure skater won all the major starts, including the Grand Prix Final and the European Championship.

In April 2016, Evgenia Medvedeva was awarded the title of Master of Sports. The famous Russian Sports Minister Vitaly Mutko announced it. The statesman thanked all the skaters who participated in the world championship for the worthy results and reminded the preparations for the forthcoming Olympic Games 2018. The coach of Evgenia Medvedeva Eteri Tutberidze got an honorary diploma of the sports department of the Russian Federation.

The beginning of 2017 brought Evgenia Medvedeva new awards - two gold medals at the European Championship, which was held in the Czech Republic, and also the first place at the World Championship held in Finland. In April, Evgenia Medvedev won new world record in Tokyo, receiving 80.85 points.

According to the latest news, the figure skater continues her way to the Olympus of world fame. Now the girl is at the peak of her athletic form, which she proves at every performance. Medvedeva became the second figure skater of the world, after the athlete from Canada Alain Chartran, who performs jumping elements in the second half of the performance. The last trick that the figure skater mastered was a jump with her hands up.

The figure skater pleased her fans and coaching staff with another victory in early September 2017. Evgenia performed at the Ondrej Nepela Memorial in Bratislava, where she scored 80.00 points, almost breaking her own world record. But in Sochi the girl had few mistakes. Experts argue that a small decline in physical form is necessary before the decisive performance during the upcoming Olympics-2018.

In January 2018, Evgenia Medvedeva, who had the trauma before competitions, and Alina Zagitova fought for the championship at the European Championships in Moscow. Evgenia lost admitting the mistake in a short program. Zagitova became the champion of Europe for the first time.

• 2016 - first place at the European Championship

• 2017 - the first place at the European Championship

• 2016 - the first place at the World Championship

• 2017 - the first place an the World Championship 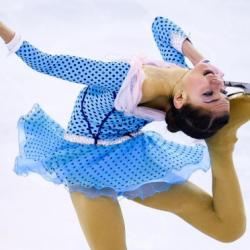