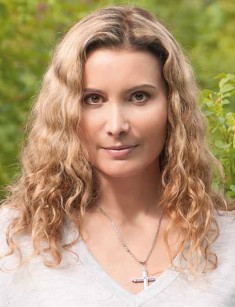 Eteri Tutberidze – is a Russian figure skater, who didn’t achieve immense success in her career, but then she fulfilled herself as a coach. Every year she prepared the young Olympic champions and World champions to appear on ice. At present time Eteri Tutberidze has the title of the Merited Coach of Russia, and the sporting press calls heer the genius of coaching.

Eteri Tutberidze was born on the 24 of February, 1974 in the Soviet Moscow. She was the 5 child in the Georgian family of many children: a glorified sportswoman has a brother and three sisters. By the words of Eteri in her interview, her father hoped that the fifth child in their family would be a boy, but he wasn’t disappointed when the fourth daughter was born.

Though the parents of Tutberidze were not rich, they took all the possible efforts so that their children would never lack anything.

Eteri spent her childhood near the church of the Matronushka at the Abelmanovskaya Zastava. The father of future figure skater was taking any job he could find to make a good living for his family, but his junior daughter had to wear her brother's clothes (her sisters were much older than her). With her luck, her brother liked only boys’ color – khaki. But if not for inappropriate clothes, it can be stated without a doubt, that Eteri had a happy childhood.

Her mother thought, that her daughters extremely needed to learn foreign languages and to play the musical instruments professionally. Eteri’s sisters attended German and English schools, drawing lessons, studied the Rudiments of Music. The sportswoman also got a musical education: Eteri successfully graduated from the musical school of Ippolit-Ivanov, choosing piano as her major musical instrument.

For the first time, junior Tutberidze saw elegant figure skaters, skating on ice so gracefully when she was 4,5. The slightest of motions of the figure skaters seemed so magical and fabulous for Eteri, that a little girl compared the athletes with small snowflakes.

Initially, 30 children were training in the group, which Evgenia Zelikova was teaching. But the time passed, and there were only 5 of them left – figure skaters of the highest expectations. Edouard Georgievich Pliner, the husband of Zelikova, took talented skaters under his wing. Pliner turned out to be a very strict and laconic coach, though his students respected him.

Eteri told, that Edouard Pliner could explain the complex element in a couple of words in such a way, that no one of other coaches could do this even in a dozen sentences. Other figure skaters couldn’t choose the appropriate phrases and the students of such coaches had to fail more than once and they were desperate because of the disastrous failures to achieve the desired results.

However, professional sport is always involved with injuries. At first, it was about slight injuries and lack of stability at jumping, but in short time Eteri was seriously injured: she had a fracture in her spine. In attempts to cure the girl, her mother took her to different doctors and bought the numerous medicine. Among other things, Tutberidze constantly got calcium injections. It’s possible that due to this Eteri got back on her feet, but this method of treatment turned out to have side effects. The girl managed to grow to 22 cm in three months.

Though the fracture in her spine healed, the figure skater understood, that she couldn’t gain success in single skating. Her high height also was an obstacle (at present the exact height of the sportswoman is not known).

Eteri didn't want to give up the sport and that's why she decided to skate with a partner. Her coaches were Lidia Kabanova, Elena Tchaikovskaya, Natalia Linichuk, Gennady Akkerman, Tatiana Tarasova. Eteri performed in pairs with Vyacheslav Chichekin, Alexey Kilyakov, and other talented figure skaters.

Although, you can hardly call the adult career of Tutberidze tremendous. Eteri had to leave her coach Elena Tchaikovaskaya, as Elena decided to finish her career after her major student Vladimir Kotin had left the professional sport.

Natalia Linichuk was training more than a dozen pairs and had not enough time to work on details over every element with each student. Tatiana Tarasova gave special attention to the pair of Klimova-Ponomarenko, which was destined to perform at the Olympic Games.

During her career, Eteri gained a couple of medals at the stage of Soviet Cup. Disappointed with her next coach, the young woman understood, that she had to change something in her life. At the very time, she was lucky to get the offer to go on tour to the USA, which she eagerly accepted.

Working in the USA

In the beginning life in the USA wasn't so easy for Tutberidze and other members of the Russian ice ballet troupe. When the figure skaters arrived in Oklahoma it was found out that some passports of these young people were invalid. Only Moscowitz people were able to enter the USA, and other lucky people had to wait for a month.

They really lacked money and when, at last, the troupe gathered together, it was found out, that the contract was canceled because of the non-performance of some terms.

During some period of time, the figure skaters were living in the building of YMCA, on the floor for homeless people.

Soon there was a first terrorist attack in the USA. It was the first one of the list of bloody terrorist attacks. The extremists blew up the house, which was situated opposite to YMCA building. Instead of the latter building, there was a huge amount of wreckage and injured bodies left. One could hear crashing and shouting of true fear. The artists were hosted by the local families, and the fire officer, who gave shelter to Eteri and her partner Nikolay Apter, even helped them to find new work in the USA.

During 4 years ice skaters regularly performed on ice, but then they understood, that they desired more calm activity. In such a way, Nikolay and Eteri started their coaching career in San-Antonio.

The business was going well, though Tutberidze was missing her native country more and more with each month. Once Eteri finally decided to move to Moscow and made this wish come true.

At first. She had troubles with finding a job in her native country. But with time the figure skater succeeded in getting a job in Zelenograd, later – at the ice rink - "Silver ".

Most of her students came to her in their childhood and became for Eteri like her own children. Till present days, the parents of many children, who showed interest to figure skating, try to know, where Tutberidze trains her students. So, they want to carry their children to Tutberidze.

The coaching biography of Tutberidze turned out to be much more exciting and interesting, than her performances as a figure skater. At present days, Tutberidze is a brand. Even fan groups and pages, created in "Instagram " and other social networks, usually are not dedicated to the students of Eteri, but actually to the group of Eteri.

Her students are such figure skaters, as two-time world champion and silver winner of the Olympics Evgenia Medvedeva, the winner of the European Championship Sergey Voronov and Olympics champions Yulia Lipnitskaya and Alina Zagitova.

But at the end of 2015 года Lipnitskaya left Tutberidze and shifted to the coach Alexey Urmanov. After this, there were different gossips about the leaving of this figure skater from the Tuberidze’s group. The press was discussing the conflicts between Julia and her coach and also about her health problems. The experts analyzed the girl’s diet and found it unhealthy and provoking physical and psychological diseases. Later, the girl’s mother announced about Julia’s leaving figure skating.

Even so, other talented figure skaters replaced the famous ice skater in the team of Eteri. Another student of Eteri Tutberidze Evgenia Medvedeva won the World Championship for two times, the European Championship in 2016 and 2017, and also became a two-time silver winner at the Olympics in Pyeongchang district.

The family of Eteri is covered with a secret and there are many gossips about it. Tutberidze has a daughter Diana, who was born in 2003. The sportswoman tells, that Diana’s father is her husband Mr. Davis, who didn’t want to move to Russia with her.

In certain professional circles, it is said, that the father of Tutberidze's daughter is Sergey Buyanov. The husband of Elena Vodorezova. In any case, the girl has already followed in the footsteps of her mother and she successfully performs among juniors.

In the interview, Eteri told, that her daughter had some problems with health. Diana Davis suffers from hearing loss, which has developed because of the course of antibiotics through the fault of the doctors. Diana visits mother's training and tries to live a full life. But on ice relations between mother and daughter are strictly professional.

The Olympics of 2018 sparkled with the fascinating performances of the figure skaters, studying at the school of Eteri Tutberidze. Alina Zagitova became the champion in individual competitions. Moreover, the figure skater set the new record score for the briefing programme. The Jury evaluated the performance of Zagitova in the following score - 82,92.

These are not the first impressive victories of Tutberidze’s student. Also, a year earlier, Aina Zagitova became the winner of the final of Grand-Prix and the World Champion among juniors.

Evgenia Medvedeva brought two silver medals from the Olympics. And though Zagitova beat Medvedeva in medals, the latter was at the first place in the rate of the Figure-skating federation in January 2018. 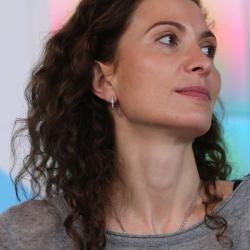