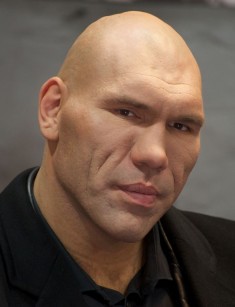 Rivals and fans called Nikolai Valuev as Nikola from Petersburg, a Mountain Man, a Beast from the East. Powerful and successful he is respected by people.

Nikolai Valuev was born on August 21, 1973 to a family of workers. Both mother and father worked at the factory. The future boxer spent his childhood and youth in Leningrad.

Nikolai was born as an ordinary child - 52 cm, the standard weight. But in kindergarten, he was growing up faster than other children. Now his height is 213 cm. His parents had to buy shoes and clothes very often, but at that time it was difficult to find. The boy was noticed by the coaches and they offered him to play basketball. From the 5th grade Nikolai Valuev played basketball. Firstly, he attended it at school, and then he was training at the sports school of Anatoly Steinbock and won the national championship among juniors.

However, his height became an obstacle to his future basketball career. It was hard for Nikolai to do push-ups and pull-ups; he also had problems with coordination. Then Valuev moved to the sports academy and began specialize in a discus throw. He easily became the master of sports. Due to the fact that the athlete was constantly growing, the coach had to constantly change methods to his training.

For some time Valuev attended the circus school, then entered the university. A year later he gave up his training and only in 10 years started to train again. In June 2009, he received a diploma, and the following year he entered the Moscow University of K.G. Razumovsky at the Faculty of Economics.

At 20 he started his boxing career. At this age other athletes already have considerable experience. Oleg Shalaev became the first coach of Valuev. Few months of intensive training, and the boxer-beginner came out into the ring. It was in 1993.

His first fight took place in Berlin. In the ring he fought against the American John Morton and won him. In 1999 Nikolai Valuev defeated the Russian boxer Alexei Osokin and became the heavyweight champion of the country. The following year, he won the title of RAWA champion in the fight against the Ukrainian boxer Yuri Elistratov, whose nickname was “The murderer”.

Nikolai Valuev won the title of intercontinental champion in 2004 after the fight against Richard Bango. Two years later Valuev became the first champion in the history of Russia according to the version of the BWA. Three years later, in a duel with Ruslan Chagaev he lost. One of the best fights in his career, Nikolai Valuev had with the Englishman David Haye, but he again lost.

In 2010 Vitali Klitschko called Valuev to a duel, but the battle between two outstanding athletes wasn’t held. Many fans still regret it. A year later, Nikolai Valuev announced that he was finishing his career.

In the ring, the Russian boxer fought 53 fights, 50 of which ended in his victory.

Nikolai Valuev came in politics in 2011. He ran for the State Duma deputies from the party "United Russia". Now he is engaged in physical culture and sports affairs, being a member of the committee.

Several times the boxer appeared in films. He made his debut in the episode, but soon played the main role in the film "Stone head". The boxer did not have to invent anything, because he played himself.

Valuev was offered the role of Krysoboy in the adaptation of The Master and Margarita, but he declined this offer, as the sports schedule did not allow it.

An athlete, a politician and a showman Nikolai Valuev is a good family man. He is happy in his marriage with his wife Galina. Three children are growing up in their family: a daughter Irina, sons Grigory and Sergey. At one of the TV shows the boxer admitted that his wife is the head of the family. At the same time it turned out that fierce on the surface the man is sentimental in his heart, and faithful to his wife.

Valuev likes hunting and boats, owns real estate in Russia and Germany. Since 2009, he is a head of his own boxing school. Its branches work in St. Petersburg. Valuev is also engaged in charity. Nikolay Valuev’s Foundation helps the Children's Sports School.

• "7 gnomes: And the whole forest is not enough"

• "A game without rules" 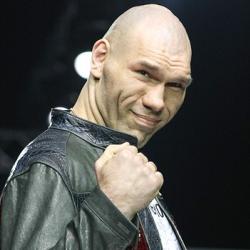