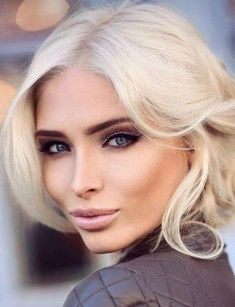 Biography of Alena Shishkova became interesting to fans after her participating in the contest "Miss Russia", and also because of the relations with rapper Timati.

The girl was born in Tyumen on November 12, 1992. Alena was the only child in the family, so her parents tried to provide the girl with everything that Alena wanted. Little details are known about Shishkova's family, but on the photos posted by the model in social networks people noticed that Alena's mother looks like her daughter as two drops of water. Also, fans of the model noted that in photos with the daughter, the girl's mother looks very young.

Since childhood, the girl grew up as a creative child, but there were no prerequisites for a model future. Alena played the guitar and practiced academic singing. But the musical career was not destined to become a part of the girl's life. When Alena Shishkova was a teenager she appeared in a fashionable glossy publication and decided that the career of the model is her destiny.

The girl participated in beauty contests, which today are considered extremely prestigious: "Miss Dream", "Miss Hope", "Miss Charm". The model managed to win the popular contest "Cover Beauty Look". The girl's parameters - height is 176 cm and weight is 50 kg - allowed Alena to find herself in the modeling business and get recognition at serious beauty contests.

2012 year was important for Alena Shishkova, when the girl decided to participate in the contest "Miss Russia 2012". Alena managed to become the second vice-miss of Russia. Then the girl's appearance was remembered by unusual and very strange answers to standard questions from the audience. And Shishkova managed to win the hearts of men and fans with her beauty.

Thanks to such a prestigious competition, photos of Alena Shishkova began to appear in fashion magazines, and new horizons opened for her. The head of the Moscow model agency "Renaissance" Svetlana Kuvshinova paid attention to the girl during the audition for the contest. And Shishkova signed a serious contract with the agency.

The representatives of the Russian modeling business as well as foreign companies noticed the girl. Nowadays Alena Shishkov is invited as a model for Fashion Weeks not only in Russia, but also abroad - in Tokyo and Milan.

When it comes to the appearance of Alena Shishkova, people emphasize the noticeable changes in the appearance of the model. The girl does not hide at all that after meeting Timati she decided to do a small plastic surgery on her nose and to make her lips bigger.

Undoubtedly, without this correction Alena Shishkova looks no less attractive. To compare the appearance of the model in the past and today is possible with the help of photographs on the topic "Plastic: before and after". Enthusiasts and fans of Alena post it on the Internet.

At the same time, the fans of the model believe that because of the modern standards of "beauty", she will not look like a Barbie doll, like many girls who work in the modeling business.

It is should be noted that the girl has two tattoos. She looks like her favorite star since childhood Megan Fox.

Alain shares her photos in stylish dresses in Instagram. The page of Shishkova has been verified and contains an appropriate mark. The model posts photos and videos from social events as well as photos of fashionable "looks". Alena shows pictures from professional photo shoots, as well as quick selfies in the mirror. 5.7 million subscribers follow the model’s page.

At the same time, fans not always support the model's views on fashion and beauty. Subscribers don’t like excessive make-up and unnaturalness, once even compared Alena with a zombie and a mannequin, when Shishkova shared a photo with an excessive foundation and black lipstick.

The personal life of Alena Shishkova was actively discussed after relations with the well-known goalkeeper Maxim Koval, who plays for Kiev Dynamo. They met on the Internet. Perspective goalkeeper for a long time sent messages to her and decided to insist on a personal meeting. Then Alena Shishkova combined career in Moscow with studies in university. She often went to Kiev and more than once was seen with the football player. Their relations did not last long, but was memorable for fans.

At the end of 2012, Alena Shishkova met the rapper Timati personally, and in few months the rumors about the romantic relationship between the musician and the model appeared. For the first time Alena Shishkova and Timati appeared together at the New Year's concert "Song of the Year". The girl did not go on stage and accompanied the singer only behind the scenes and walked with him by the hand.

On March 19, 2014 Alena Shishkova gave birth to Timothi’s daughter Alice. The baby was born with a weight of 4 kg and height of 53 cm. Fans expected that after the birth of a child the stars will get married, but this did not happen.

After some time the couple broke up, however the musician constantly participates in the upbringing of his daughter.

After parting with Timothy, the rapper's former civil wife does not complain about her personal life. For two years Alena hid new relations and showed only photos of gifts from boyfriends.

In November 2016, Alena was seen with Nikita Mazepin, 17-year-old reserve pilot of the Sahara Force India team of "Formula 1". The paparazzi took pictures of young people walking together, and then in "Instagram" of the young man a photo with the model with a signature "With Love" appeared.

In May 2017, the press began talking about Alena's new relationship. The guy again was younger than the model. Alena began to upload photos in "Instagram" with 19-year-old Yury Osipov, the son of the ex-president of the Russian Academy of Sciences. When the model posted the photos with Osipov she closed the comments.

In June 2017, Alena Shishkova, together with her friend, opened her own beauty salon on Novy Arbat, specializing in hair coloring. In an interview the model told that they didn’t expect such a rush at the opening of the salon. Nevertheless, Alena promised that she will develop her own beauty business: the salon will work in full force to meet demand of people. But now the salon does not even have an official website. The model advertises the salon in Instagram and offers to register by phone.

In June 2017, the model got into an unpleasant situation at the MUZ-TV Awards. The hosts did not recognize Alena Shishkov and presented the girl as a friend or relative of the singer Valeria, with whom Shishkova arrived at the event. The same signatures appeared under the photos from the award. Alena was embarrassed because of such an incident on the red carpet, but did not quarrel and laughed at the situation in Instagram.

At the end of June 2017, Alena made a photo report from the Formula 1 Grand Prix in Azerbaijan in Instagram. 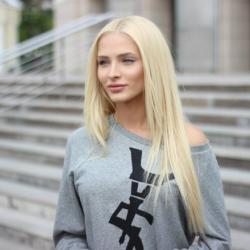