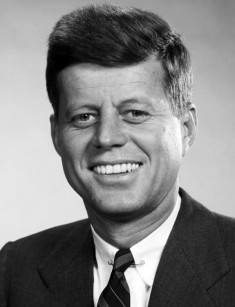 John Fitzgerald Kennedy is the 35th US President. Although he made some important decisions being a president, his name is associated especially outside the United States with a mysterious assassination. Although the murderer was officially found there are still a lot of speculations about it.

It’s clear that he had no another choice but to become a president. He was born in Brookline in the family of businessman and politician Joseph Patrick Kennedy and philanthropist Rose Fitzgerald. He was named after his grandfather John Francis Fitzgerald, the mayor of Boston and one of the most eloquent politicians in the country. Moreover, most of his farther relatives were politicians.

John was the second oldest of a group of nine siblings. He was often ill during his childhood and adolescence. Scarlet fever occasionally brought him to the brink of death that forced him to miss months of school. Nonetheless, he was athletic. He liked to play baseball and basketball and he was fond of track and field athletics. In high school, the young man gained a reputation of an unorganized and frivolous student who behaved in a rebellious manner.

Kennedy studied at Harvard University, London School of Economics and Political Science and Preston University. But being constantly ill he did not manage to graduate from them the first time. Doctors diagnosed that Kennedy had leukemia. But he did not believe it and he was right. Later John entered Harvard University and finally grew serious about his studies. He was carried away by political science and history. He succeeded in student societies and continued to actively engage in sports. After graduation, John Kennedy decided to continue his education and he entered Yale University to study law. But the Second World War began and he joined the U.S. army is a patriotic and devoted citizen.

He was not admitted to the armed forces due to poor health, but John used his family authority to achieve his goal probably the only time in his life. Furthermore, the future president John Kennedy didn’t wish to sit in the office, he tried to participate in military operations. As a result, he was assigned to command a patrol torpedo boat in the Pacific fleet, where he fought against the Japanese army. There are confirmed historical facts that John Fitzgerald Kennedy showed courage, his team’s exploits were written in newspapers, and John himself was awarded many military awards. He was discharged from the Navy earlier because of the aggravated health conditions. The young man caught malaria, got a complicated back injury and was wounded in battles.

Upon his discharge from the Navy, he worked briefly as a reporter. Later he succumbed to his father’s persuasion and he was engaged in the political life of the country. He ran for the U.S. House of Representatives after a seat being vacated by Congressman Michael Curly and started his political career. In 1953 he became a Senator. He was remembered above all by refusing to condemn Senator Joseph McCarthy, accused of anti-American behavior since he worked together with his brother. Later Kennedy said that he "made a normal amount of the policy mistakes".

At the age of 43, John Fitzgerald Kennedy won president election from Democratic Party and became the first Catholic president of the USA. He also participated in the first televised debates in the history of the country. Many opponents argued that Kennedy won because he looked very impressive on the screen. He donated all his state salary for charity, and his slogan was “Ask not what your country can do for you. Ask what you can do for your country”

Kennedy's domestic policy cannot be called fully successful. The initial surge of the economy was replaced by stagnation, which ended with the sharpest falling on the stock exchange since the terrible crash of 1929. John managed to reduce the unemployment rate and lowered oil and steel price, but this deteriorated relations with industrialists. At the same time, he managed to improve the racial problem and black people got equal rights. The race with the USSR for space exploration led to the development of a large-scale "Apollo" program. It is an interesting fact that the US president proposed General Secretary Nikita Khrushchev to unite efforts in this matter but the latter refused.

His foreign policy can be characterized by a significant improvement in relations with the Soviet Union, but at the same time, it coursed several hot spots in the world. Kennedy had a lot of intense conflicts, the Caribbean and Berlin crises were the most famous, as well as an unsuccessful landing in the Bay of Pigs. At the same time, John Kennedy founded the "Alliance for Progress" which helped the economies of the Latin American countries, initiated the signing of a trilateral treaty between the USSR, the United States, and Great Britain on the banning of nuclear weapons tests and intended to withdraw troops from Vietnam. On the contrary, Kennedy's successor, Lyndon Johnson, launched large-scale military operations there.

John Kennedy’s personal life changed 10 years before his death. At the age 36, he married a journalist and socialite Jacqueline Lee Bouvier. They were together less than a year before the wedding. Later Kennedy's wife became one of the most popular women in America and a true fashion queen. They had four children but the eldest daughter Arabella and younger son Patrick died in infancy. Their daughter Caroline became a writer and a lawyer as well as John Fitzgerald Kennedy Junior, nicknamed "Son of America" because he was brought up in the White House in front of the whole country. In 1999 Kennedy Jr. died in a plane crash.

It is hard to say whether their marriage was a happy one. He had an affair with a Swedish girl Gunilla von Post before the wedding. Earlier he was in love with a painter Mary Pinchot Meyer, actresses Gene Tierney and Angie Dickinson and also Judith Campbell. After the wedding, he had at least two famous lovers such as Hollywood star Marilyn Monroe and German actress Marlene Dietrich. The latter was not only much older but also one of his father’s lovers.

In the 21 century, it has become known that the 35th president suffered severe pain during his life. Any cure was helpless and he had to do novocaine injections before the press-conferences. Kennedy wrote several books. The collection of politicians’ biographies "Profiles in Courage" is the most famous one. He has rewarded the Pulitzer Prize. The Personal Journal of the 35th President of the United States also became a bestseller. John recorded his quotes and thoughts there and it was published after his death.

On November 22, 1963, President John F. Kennedy and his wife scheduled a visit to the Texas City of Dallas. When their car was driving on one of the streets, someone began to shoot and several bullets hit Kennedy who was immediately taken to the hospital. But doctors could not save his life and John Fitzgerald Kennedy died half an hour after the assassination. The governor of the state and one of the witnesses also suffered in the fire-fight.

A former Marine Lee Harvey Oswald was arrested on suspicion of assassinating Kennedy. It is interesting that he was arrested for killing a policeman 40 minutes after the president's death, but he turned out to be the main official suspect during the investigation. Oswald was shot in the police station by a local citizen Jack Ruby two days later, that's why there are no his concrete testimonies. By the way, Ruby lost his life too. So John Kennedy’s assassination is still one of the biggest mysteries in the history of the United States.

As for opinion polls, more than 60% of the population is sure that either Lee Harvey Oswald was not alone, or he has nothing to do with the president's death. There are many theories from the involvement of organized crime and large financial figures to the participation of the CIA and secret service. There are a lot of books, feature and documentary films about John Kennedy’s assassination.

Oliver Stone’s movie "John F. Kennedy. Shot in Dallas”, Norman Lewis's novel “The Sicilian Specialist” and a 26-second video shot with a home-movie camera by eyewitness Abraham Zapruder, also known as Zapruder's film are the most prominent ones. Stephen King devoted his fantastic novel "11/22/63" an attempt to prevent the murder. In 2016 the book was serialized and the main role was played by James Franco.