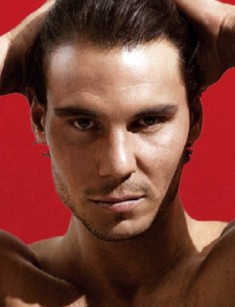 Rafael Nadal Parera was born on June 3, 1986 in the Spanish city Manacor in Mallorca. His family had a high income: the father Sebastian was an entrepreneur, owner of an insurance company and a tourist restaurant. The mother Anna Maria firstly sold perfume, and later was raising children. Among the relatives of Rapael were also celebrities, both his uncles were connected with sports : Miguel Angel was a famous football player who played for the clubs "Mallorca" and "Barcelona", and Antonio Nadal, the brother of Raphael's father, worked as a tennis coach.

As a child, Rafael was seriously keen on football, which has always been a popular sport among Spanish children and youth. His idol was his own uncle, and his favorite clubs were his native Mallorca and Real Madrid. No one doubted that Nadal would make a career as an athlete. At the age of four, Uncle Antonio, better known as Tony, gave his nephew his first tennis racket. The new sport attracted the boy so much that he started combining football and tennis. His coach was Uncle Tony, who then worked in a children's tennis club.

As a child, Rafael did not have an athletic body. He had twenty minutes of intensive training with a racket to be exhausted. To become stronger, the boy had to run about five hundred meters (and later even five kilometers) barefoot on a sandy beach daily. Tony did not spare his ward, thanks to which he soon had an ideal body and could easily run around the tennis court.

Despite his enthusiasm for sport, Rafael's parents did not see him as a future tennis player. They did not buy the boy rackets and balls, and when he lost a friendly match to his peer, they suggested their son to go fishing. But the lack of support of the family did not stop the guy from going to his dream.

Numerous trainings and classes in two kinds of sports took almost all Raphael’s time, which had a negative impact on his grades at school. Then Sebastian told his son to choose between football and tennis, in order to have time for school. Nadal chose tennis and never regretted his decision.

Being a tennis player, Rafael was interested in another sport - golf. When the guy injured his leg, the doctors advised him to quit tennis, as the game required constant movement and a significant pressure on his legs. Then Nadal thought about starting his career in golf, but his coach found another way: for a long time the athlete practiced sitting on a chair, practicing the necessary movements with his hands.

In 2010, Nadal bought ten percent of the shares of his favorite football club "Mallorca". He was offered to become the vice-president of the club, but the athlete refused.

In 2011, along with the British writer and journalist John Karling, Rafael wrote and published his autobiography "Rafa is My Story."

Until the age of twelve, Rafael Nadal was equally engaged in football and tennis. At the age of eight, he won the regional tennis championship, and by the age of twelve he had won the title of champion in all Spanish and European competitions. The guy also actively participated in all football matches of the youth soccer team. But because his school lessons, Raphael had to give up his football career.

The talented sportsman was noticed by the state tennis federation, which suggested Nadal to move to Barcelona, where there was a training base. However, the family of the future star refused to move, believing that in his hometown, Rafael will be able to perfectly train and receive education.

At 15, Nadal moved to the professional league, where already in the first year he achieved considerable success. At sixteen he became a semi-finalist of the Wimbledon Junior tournament, and two years later won the victory for the Spanish national team at the Davis Cup.

Nadal's athletic career developed rapidly in the next few years. The guy participated in all major world tournaments, taking prizes. Not without trouble: during one of the games Rafael injured his ankle and was forced to refuse to participate in the competitions.

The 2005 season brought the young tennis player a lot of victories in the games on the ground, so Nadal earned the nickname "King of the ground". He won twenty-four games in a row, defeating such famous and powerful opponents as Guillermo Corio, Juan Carlos Ferrero and legendary Roger Federer, who has been the undisputed leader of most tournaments for many years.

The phenomenal victory at the French championship brought Raphael the third place in the world ranking of tennis players. And the next sixteen wins in the same season made him number two. At the end of the season, the athlete injured his leg. That is why he was forced to miss the Australian Open in 2006. Because of the fracture, the guy was thinking about leaving his tennis career, but his coach Tony Nadal was able to put the athlete on his feet and give him confidence in himself.

The next two years, Rafael held the second place in the ranking of tennis players of the world, having lost only to his rival Roger Federer.

2008 was the peak of the career of the young tennis player. Despite rather bad start of the season, where the athlete was defeated by Mikhail Yuzhny, Jo-Wilfried Tsonga and other tennis players, in the hard-court part of the season, "King of the ground" managed to catch up. He easily won the French Open. Later, he faced Roger Federer at the most anticipated tournament of this year's Wimbledon.

Tennis players met in the final, which lasted almost the whole day. In a difficult fight, Raphael still managed to defeat his old rival and take first place not only in the tournament, but in the list of the best tennis players of this year. The Olympic Games in Beijing brought Nadal another great victory and his first gold in such tournament. At the end of the year, be4cause of the knee injury, Rafael refused to participate in several competitions.

The next year for the athlete was quite heavy. Despite the numerous victories in the tournaments this year, he had some annoying defeats in the finals of the championships. Raphael also had pains in the injured knee, so he had to refuse to participate in several tournaments, in particular, in the famous Wimbledon. However, the troubles did not prevent the tennis player from finishing the season on the second place in the rating.

In 2010, Nadal again became the number one in the world, losing this title a year later. In 2011, he lost the leading position to Serbian tennis player Novak Djokovic. A year later, Rafael won his opponent at the annual Open Championship in France, becoming a sevenfold champion. At the end of the year, the knee hurt again, that is why the tennis player refused to participate in the Summer Olympics and several other tournaments.

In 2013, he again became the first racket of the world, several times defeating his main opponent Novak Djokovic.

In 2014, Rafael won the French Open, becoming the nine-time champion of the tournament. He lost Wimbledon, losing first place to the young tennis player Nick Kirios. At the end of the year, he injured his wrist, and later lost the Shanghai Rolex Masters tournament due to problems with appendicitis. In the same year, the tennis player refused to play at the end of the season because of the surgery.

In 2015, Nadal won two tournaments: "Argentina Open" and "Mercedes Cup", but lost the championship in the French Open to his rival Novak Djokovic. And although the season has not yet ended, Rafael is currently in the tenth position of the rating.

As for personal life Rafael Nadal has relations. In 2005 he began dating the girl Maria Francesco Perello, whom he met thanks to his sister Alice.

Young people for a long time hid their relations from journalists, but over time the press began to notice the mother of the athlete, accompanied by Maria. The girl works in an insurance company and rarely accompanies her man at the championships. In 2015, in an interview, the couple said that they dreamed of creating a family and having children. 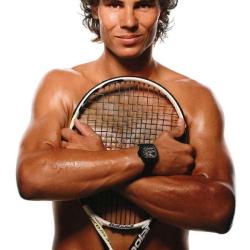