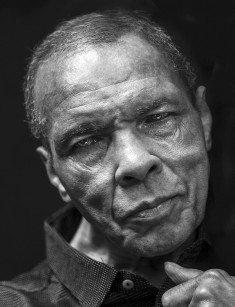 On January 17, 1942 in Louisville, Kentucky, a housewife Odessa Clay gave birth to a son. The boy was named after his father, an artist by profession, Cassius Jr. However, the world will recognize him under the pseudonym - Muhammad Ali. Cassius' brother, Rudolph, who was born two years later will also change his real name to Rahman Ali.

Their family always had money, representing the middle class, although the living conditions of the white and black people varied. The father of the family earned a living by drawing signs. His wife periodically worked in houses of rich people cooking and cleaning. The budget was enough even to save money for the cottage in a very good "black" area.

Childhood and youth of the future champion were not easy. In 1950s, there was an atmosphere of inequality in America. Even the 10-year-old Cassius felt pressure and fell asleep with tears, not understanding why blacks are considered second-rate people. His father showed his sons photographs of Emmett Till, a black teenager, brutally murdered by whites, who later were found, but were not imprisoned. Ironically, Odessa Clay was proud of her white Irish grandfather. And although in the head of Cassius Jr. there were images of white "rapist-slave owners". As he liked to say from the stands, his Irish ancestor was nothing to blame for - he married his black girlfriend.

When someone stole his favorite bicycle the 12-year-old Clay threatened to beat his offenders. He met a white policeman, a part-time boxing trainer Joe Martin, reasonably told that "before you beat someone, you must first learn this." And Cassius began to learn, taking his brother for training.

It was hard for Cassius to train: he quarreled with others, constantly shouting that he was the best sportsman and future champion. Joe Martin even often kicked him out of the gym, and none of the coaches could see any potential in the guy.

Six weeks after the boy came to the gym, he had the first fight. Cassius was pleased that the fight was broadcast on television. Despite the lack of experience, the future Muhammad Ali won the white enemy. He was very happy. He screamed at the camera that he will become a great boxer. From this moment the real work began.

In 1956 he won the tournament "Golden Gloves", which can be considered an excellent beginning of his career. 100 wins on the amateur ring and only 8 defeats by the time of graduation from school. However, the young boxer was a bad student, and only the diligence and understanding of the director helped him to graduate from school. Muhammad Ali even had problems with reading.

In 1960, Cassius, dreaming of a sports career, was invited to participate in the Olympic Games. The boxing style of the boxer was gradually forming. The boxer seemed to "dance" around the opponent on his toes, and his lowered hands provoked a blow from which he always backed away. He was often criticized both for the style of fighting and for the boastful manner of presenting himself.

He could only be stopped by the fear of flying. The boxer was so afraid of flying to Rome that he almost refused to participate in the Olympic Games. Cassius decided to buy a parachute. Clay confidently reached the final and in a difficult fight defeated Pole Zbigniew Petshikovsky, winning gold.

The father was proud of his son and even painted the steps in the color of the US flag. However, in his native city nothing has changed. And when the champion came with a gold medal to a local cafe where they did not serve "black", he was still refused to serve.

At the beginning of his boxing career Muhammad Ali hired 11 managers. In professional boxing he came on October 29, 1960, when there was a battle against Tanni Hanseker. Ali was prepared for the fight, although he claimed that Hanseker was lazy and it would be easy to win him. And he won it brought him the world title.

For training with the new coach Angelo Dundee Clay moved to Miami. For him there were no authorities, but Angelo has found a way. He respected the ward and did not try to control him, only skillfully guided him.

Clay tried to find mentors not only in sports. The beginning of 60's was the time of his spiritual search. In 1962, he met the leader of the "Nation of Islam" Muhammad and became a member of the organization, which greatly influenced his life.

In the same year, he continued to win fights, voluntarily passed the commission, but did not get into the army. Passing all the tests for physical health, he failed the test for mental abilities without answering the question of how many hours a person works from 6 am to 3 pm, given the hour for lunch. Clay liked to joke:

"I am the greatest, but not the cleverest!"

55,000 people came to the stands to watch the battle between Muhammad Ali and Henry Cooper. Few seconds before the end of the fourth round, Cooper sent Ali into a heavy knockdown. And if Ali's friends did not break the glove, having won some time for the champion, it is not known how the fight would end. In the 5th round, Muhammad cut Cooper's brow and stopped the fight.

The match between Ali and Liston was spectacular and difficult. Ali tried to win the current world champion, his eyebrow was split and there was a serious hematoma. By the fourth round, Ali couldn’t see anything, but the coach insisted on entering the ring and was right - his vision returned, and the boxer Muhammad Ali became world heavyweight champion.

In subsequent years, Muhammad Ali became the "boxer of the year" five times, won the title of not only the "boxer of the decade", but also of the century. In early 90's, he entered the International Boxing Hall of Fame in order to remain a sport legend forever.

In 1984, Muhammad Ali was diagnosed with a terrible diagnosis - Parkinson's disease. He was a bit deaf; spoke not very well, all motor functions failed. Muhammad bravely held the main stroke in his life - the stroke of fate. The incurable disease was the consequence of professional sports activity of Clay. His body suffered, but the mind remained sharp, and the heart was kind. The athlete devoted himself to helping people. To this day he was engaged in charity.

Muhammad Ali was married four times. With his first wife, he broke up early in his youth because of her desire to become a Muslim. The second wife Belinda Boyd (Khalil Ali after the marriage) gave birth to four children. However, Ali was not very good husband, and his betrayal caused the divorce of the couple.

He married his mistress Veronica Porsche, who became his third wife in 1977. The marriage lasted 9 years. But Muhammad wasn’t alone for long, and married his close friend Iolante Williams. They even adopted a child. In addition to legitimate children, Muhammad has two illegitimate daughters.

At the end of May 2016, the legend of world boxing was urgently hospitalized because of the problems with breathing. In one of the hospitals in Phoenix Mohammed Ali he spent several days. But he could not be saved.

Mohammed Ali died on June 4, 2016. He was 74 years old. The main disease of the athlete was Parkinson's disease. 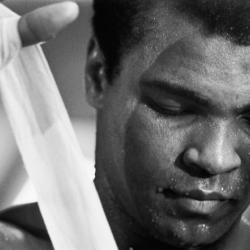