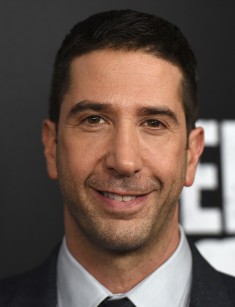 David Lawrence Schwimmer is the actor and movie director of the American origin who played Ross Geller in the TV series “Friends.”

David was born on November 2, 1966, in New York into the family of lawyers Arthur Schwimmer and Arlene Coleman who were Jewish. David has the older sister Ellie. In 1968, the parents and their children moved to Los Angeles, Beverly Hills. The Schwimmers could afford a luxury mansion after the mother began to work on divorce cases.

David went to Beverly Hills High School where, in addition to the main courses, he took up drama classes. At 10, the boy debuted as the fairy in the play “Cinderella.” Two years later, David started going to Shakespeare’s club led by the actor from Great Britain Ian McKellen. Here, David practiced not only classics but also modern plays about the Holocaust. For his roles in Shakespearean plays, David received the main award of the youth theater festival in the Lake Tahoe coastland twice.

When the master decided to move to Chicago, Schwimmer followed his example. In the large center, David entered the theater department of the North-West University. After the graduation, he became one of the theater group Lookingglass Theatre Company and Actors and Directors Association leaders. In the second half of the 1980s, Schwimmer worked at the theater stage as a director and actor.

For the first time, David appeared on the screen in the comedy drama “Biloxi Blues.” After the work on the movie “Dead Silence,” David got the secondary role in the 1991 military blockbuster “Flight of the Intruder.” In the same year, Schwimmer debuted on TV in the family series “The Wonder Years.”

In a year, the crime tragicomedy “Crossing the Bridge” by Michael Badner was out; David played the main character John Anderson. Schwimmer also starred in the TV series “L.A. Law” that was the pioneer of movies about lawyers. In the philosophical comedy “Twenty bucks,” David got a secondary role again.

Having appeared in some episodes of the series “NYPD Blue” and “Blossom,” in 1994, Schwimmer got the leading part in the thriller “Wolf” by Mike Nichols. The cast consisted of many stars: Jack Nicholson, Michelle Pfeiffer, James Spader. In the comedy “Monty,” Schwimmer became the liberal son of Greg Richardson who always conflicts with his conservative father.

In the same year, James Burrows’s large project “Friends” started. This series had a great influence on the actor’s career. 22 million viewers watched the pilot episode. The comedy series about the life of 6 friends in New York topped the channel NBC rating which gave the creators the opportunity to continue it for 10 seasons.

In the auditions for the roles of Rachel Green, Monica Geller, Chandler Bing, Joey Tribbiani, and Phoebe Buffay, thousands of actors took part. As a result, the producers David Crane and Marta Kauffman selected Jennifer Aniston, Courteney Cox, Matthew Perry, Matt LeBlanc, and Lisa Kudrow. The character Ross Geller, the paleontologist, was an exception – the role was created for David Schwimmer.

For his work in the first season of “Friends,” David was nominated for Emmy Award for Outstanding Lead Actor in a Comedy Series in 1995. In addition to acting, David realized himself as a director in the series and created 10 episodes from various seasons independently. After the project finished in 2004, Jennifer Aniston was engaged in movies, Courteney Cox began to work as a producer, David Schwimmer continued to act and direct movies, and the rest of the actors remained on TV.

In the late 1990s, David appeared in the popular series “ER” episode, later he and the actress Gwyneth Paltrow starred in the melodrama “The Pallbearer.” The trio of David Schwimmer, Chris Cooper, and Emily Procter played in the medical drama “Breast Men.” Schwimmer took part in the movies “Since You've Been Gone,” “Apt Pupil,” and “The Thin Pink Line.” In the adventurous action movie “Six Days, Seven Nights,” David played with Harrison Ford and Anne Heche. In the fantastic comedy by Alfonso Arau “Picking Up the Pieces,” Schwimmer acted with Woody Allen and Sharon Stone.

In 2001, the multi-episode military drama “Band of Brothers” by Steven Spielberg and Tom Hanks was released; Schwimmer played Captain Herbert Sobel. In 2005, the actor starred as the main character in the movie “Duane Hopwood.” David’s character suffers from alcoholism, but at some moment decides to give up the harmful habit and to turn over a new leaf. In a year, the actor’s filmography included the crime comedy “Big Nothing” with the main characters played by Alice Eve and Simon Pegg.

In 2007, David Schwimmer created the full-length movie “Run, Fatboy, Run” where Simon Pegg and Thandie Newton starred. The world’s box office was $35 million. In 2012, the actor took part in the famous movie “Madagascar” and voiced the giraffe Melman.

For a long time, David Schwimmer’s personal life remained the same: although the star regularly changed girlfriends, he was a confirmed bachelor. Since 2000, he had affairs with the Australian singer Natalie Imbruglia, the Israeli actress Mili Avital, the American actress Rochelle Ovitt. In 2007, at the movie set in Great Britain, he met an ordinary waitress Zoë Buckman.

For three years, David had been keeping his relationship with the woman in secret. In 2010, he announced his engagement. The couple married in summer, and at the beginning of May, their daughter Cleo was born. David Schwimmer dislikes social events and lived with his family privately. The star has no Instagram page, and photos appear only in printed media or on the Internet.

In 2016, at the show about the director James Burrows’s works, the actors starring in the series “Friends,” met in the NBC studio at the special two-hour-long episode shooting. In 2016, David starred in the drama “American Crime Story” released on channel FX: it was the story about the mid-1990s scandalous crime in which the football and movie star O. J. Simpson was involved. In the movie, Schwimmer played the lawyer Robert Kardashian who protected the criminal and helped him escape the punishment.

In 2017, the actor’s career remained bright. He starred in the new series “Feed the Beast” for the AMC Channel and played the café owner who suffered financial losses. Schwimmer directed the videos that were included in the project fighting sexual harassment of women.

In March 2017, Schwimmer officially announced that after the 7-year marriage, he and Zoë Buckman broke up. The divorce took place in April, and the ex-spouses remained on friendly terms. 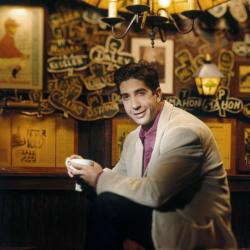