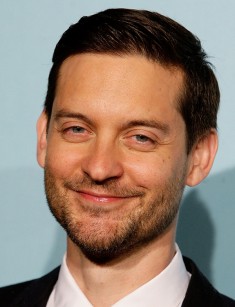 Tobias Vincent Maguire is an American actor popular due to his role of Peter Parker in the blockbuster Spider-Man which was released in 2002 based on the series of the well-known comic books. He is a two-time winner of Saturn Awards for the second part of this action and also for the role of David Wagner and Bud Parker in the fantasy comedy Pleasantville.

Tobey was born on the 27th of June of 1975 in the coastal Californian town of Santa Monica. The 18-year-old secretary-typist Wendy Brown and the 20-year-old cook Vincent Maguire who became his parents were not married. The young people got married two years after their son’s birth. Though, having lived together for a couple of years, they divorced. Tobie has four stepbrothers. When the young man turned eighteen, his father committed a crime and was taken to the prison.

After the separation of the parents, the boy had to change the place of the residence and trustees very often. Tobey one by one lived with his mother, then with his father, aunts, grandmothers, grandfathers and other family members in different American towns. The boy respected his father, and in childhood, he dreamed to follow in Vincent’s footsteps and to become a cook.

After the completion of the elementary school, he was planning to enter the class which specialized in the housekeeping. But his mother who wanted another future for her son offered him a deal: Wendy paid the boy $100 so that he joined the drama class and studied acting skills. Tobias wasn’t against it. But the boy has studied at the high school only for one year, and at the age of thirteen, he finally left his studies. Maguire passed the examinations to receive the school-leaving certificate in 2000 when the actor turned 25 years old.

Being a teenager, Tobey Maguire took part in the commercials and the episodic roles in the TV series. The young actor began his creative career in the shootings in the commercials of fast-food McDonald's chain and the Atari video games. Then the young man began receiving the secondary roles in the sitcoms Roseanne, The Wizard and Eerie, Indiana. On the movie set of one of the series, Tobey got acquainted with his peer Leonardo DiCaprio who was a beginning actor at that time as well. They have become friends since then.

During a long time, Tobey Maguire was playing the roles of the teenagers even when the actor already became older than his characters. Before 1993 Tobey appeared only on the TV screens. The biographic drama This Boy's Life became the first picture for the young actor. The movie was shot by the same-name novel of the literature professor Tobias Wolff who described in the book his own childhood which passed in the fifties-sixties of the 20th century.

This drama is narrated on behalf of the teenager called Toby. Initially Maguire applied for this role but after Maguire initially applied. But after several doubts, the director of the movie Michael Caton-Jones chose Leonardo DiCaprio. Maguire performed the role of his friend called Chuck Bolger. The friendship of the boys contributed to the realistic embodiment of their characters on the screen.

In 1999 the actor performed two roles in the fantasy romantic comedy Pleasantville which was shot in quite an unusual manner. In the beginning, the movie was shot as black-and-white, and later gradually was released in color. Tobey Maguire embodied the role of the introverted teenager David Wagner in the real modern world. For the participation in this movie, Maguire received Saturn Awards for Best Young Actor.

The actor has become world-famous due to the role of the modest school student Peter Parker who was bitten by the spider and who transformed into the superhero in the movie Spider-Man based on the comics book. Tobey turned out to be an ideal candidate for this role – the actor's charming smile, his athletic body and medium height (173 cm) ideally met the character’s parameters. The blockbuster was shot on the verge of the genres of fighter and melodrama that's why this movie managed to attract the admirers of both genres. In all the series of the trilogy the American actress, Kirsten Dunst played the role of Peter Parker’s workmate - Mary Jane Watson.

To embody the image of the Spider-Man in high-quality Tobey Maguire learned the insects with the help of the specialists at the research institute, and took lessons of mountain-climbing, martial arts, and yoga. Moreover, the actor worked together with the industrial clumber to learn the habits of the spiders, and during all the shooting period he observed the special diet.

After the success of this movie, there were shot two sequels - Spider-Man 2 for which the actor received his second Saturn Awards and Spider-Man 3. The movie Spider-Man 3 with the budget of $258 million turned out to be one of the most expensive pictures in the history and had the huge box office even though the movie critics met it with restraint. The actor earned $36.5 million for his work in three movies about Spider-Man.

Due to this trilogy, Tobey Maguire managed to emerge from the shadow of Leonardo DiCaprio with whom he continued to appear on the same movie sets. The screen adaptation of the classic American novel The Great Gatsby written by Francis Scott Fitzgerald became the next joint movie for the friends.

In 2009 Tobey Maguire received the offer from the creators of the war drama Brothers in which Natalie Portman and Jake Gyllenhaal were considered for two other main roles. In this drama, the actor transformed into the character who had experienced the horrors of the war, the friend's assassination, and wife's betrayal. In 2011 the actor enriched his filmography with the comedy The Details in which Tobey appeared in the role of unlucky husband Jeff who tries to solve his everyday problems.

In 2013 Tobey Maguire appeared in one more war drama Labor Day in the secondary role, and two years later he performed the leading role in the movie biography Pawn Sacrifice, telling about the destiny of the grandmaster Bobby Fischer. The drama was premiered at Toronto Film Festival.

Tobey Maguire is also famous by the fact that his photos are used as memes. There is the picture of the actor on the web which was included in the top of best memes and took the third place. The actor gave way to Nicolas Cage ("You don’t say?") with the shot from the movie Vampire's took the second position and to Jackie Chan ("What?") who reached the first place where the actor is represented with his hands over his head.

Tobey Maguire has been married since 2006 to Jennifer Meyer who is engaged in the jewelry design. A year after the wedding Jennifer gave birth to their daughter Ruby Sweetheart, and two years later their son Otis Tobias was born.

Since 1992 the actor was a vegetarian, and since 2009 he has been a vegan. Moreover, Maguire doesn't eat meat, dairy products, and eggs. Besides, Tobey doesn't wear leather and fur. Since the age of nineteen, the actor doesn't drink alcohol though when being a teenager he even had some problems with alcohol.

Since 2004, Tobey Maguire takes part in the professional poker tournaments. In June of 2007, he appeared on the TV show Poker After Dark in which he won $10 million.

At the end of 2016, there appeared the information that Tobey and Jennifer officially filed for the divorce which was caused by the husband’s betrayal. The Hollywood star Demi Moore became Tobey’s elect. They had relations before Tobey’s marriage in 2002. The thirteen-year age difference between the lovers Maguire and Moore didn’t prevent them from being together. At the beginning of 2017, the lovers appeared together at the secular events embracing together for a couple of times. But in a short time, the newly made bachelor was noticed in a company of the young brunette. They were kissing when they left Villa Lounge bar. The photos of the couple at once appeared in all tabloids dedicated to the life of the Hollywood stars.

At present, the actor is engaged in the shootings of the drama The Crusaders directed by Gary Ross and in the comedy under the title Quiet Type. 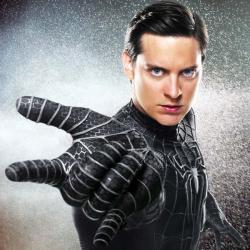