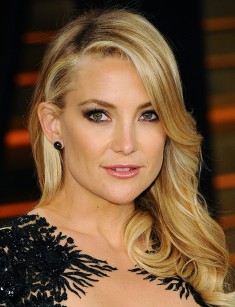 Kate Hudson is an American actress, who has become famous after the release of the movie Almost Famous. Later she has proved her professional skills with her roles in the pictures How to Lose a Guy in 10 Days and My Best Friend's Girl.

Kate was born in Los Angeles in the family of celebrities. Her father Bill Hudson was a musician in the legendary group The Hudson Brothers, and her mother Goldie Hawn is an extremely successful actress. In their family, there also grew up Kate’s elder brother Oliver.

When the girl just turned a year and a half her parents divorced. Kate’s mother and her new husband – the actor Kurt Russell were involved in the further education and upbringing of the children. Already being adults Kate and Oliver will tell that since childhood they have perceived Russell as their father as Bill had no interest in his children’s destiny. By the way, Goldie and Kurt gave birth to their daughter’s second brother - Wyatt.

Hudson attended Crossroads private school in the suburb of California in Santa Monica, where her family was living. After the girl had received the school leaving certificate, she set off for New York and entered the prestigious university. However, Kate’s studies there didn’t last for long as she decided to become an actress as well as her mother. Kate considered the experience on the movie set the best education.

Kate Hudson had her first debut in the television series Party of Five of Us and the psychological drama Desert Blue. The romantic musical comedy 200 Cigarettes has brought popularity to the actress, and the role of rock fan Penny Lane in the musical Almost Famous brought the actress her first nomination for Academic Awards.

In 2002, Kate was chosen for the leading female role in the blockbuster Spider-Man, but the girl canceled the contract in order to take part in the military-historical picture The Four Feathers. After this movie, Kate accepted the major roles only.

Further, there was a range of favorite romantic comedies: Alex & Emma, How to Lose a Guy in 10 Days, Raising Helen, Le Divorce, You, Me and Dupree, My Best Friend's Girl and others.

Also, Kate Hudson enriched her filmography with the following movies - a detective The Skeleton Key, an adventure thriller Fool’s Gold, a political thriller The Reluctant Fundamentalist, the action movie Good People and melodrama Wish I Was Here.

But anyway, romantic comedies prevail in the actress's filmography. It’s worth noting the movie Bride Wars, in which Kate worked together with Anne Hathaway, and the picture A Little Bit of Heaven with Lucy Punch and Something Borrowed in which Ginnifer Goodwin was Hudson’s partner.

Except for acting, tireless Hudson has tried her hand in the producing, directing and scriptwriting. The actress had her first experience in the creative biography as a producer in 2005 on the television, when the girl was responsible for the promotion of the TV movie 14 hours.

In 2007, Kate released a short – length movie Cutlass. The comedy tells a story about the dream of the young girl which realization was an extremely expensive guitar. Kate invited to the movie Virginia Madsen, Dakota Fanning, Kristen Stewart and even her stepfather Kurt Russell. In two years the actress appeared as a producer and performer of the leading role in the comedy Bride Wars. The success of the film was supported by the box office, which has reached the sum of $ 120 million.

According to the American standards, Kate Hudson got married early, at the age of 21. Chris Robinson, a musician, and vocalist of the rock group The Black Crowes became her husband. Kate met him on the movie set of the musical Almost Famous. The young people have lived together for seven years, and Kate gave birth to their son Ryder Russell Robinson.

Then Kate began a long-lasting love affair with the actor Owen Wilson, her partner in the movie You, Me and Dupree. Though, this relationship turned out to be somewhat aggressive. The couple quarreled quite often, and once Owen even tried to commit suicide because of the conflict with his beloved woman. When Hudson has made sure that the man’s life wasn’t in danger, she broke up with him.

The well-known comedian Dax Shepard and the cyclist Lance Armstrong became the next boyfriends of the actress. Though, these love affairs were not long-lasting in Kate’s personal life. But Kate had serious relations with the singer and musician Matt Bellamy, the leader of the famous band Muse. The loving couple lived in real marriage, and they even have become the parents of the boy called Bingham Hawn Bellamy. But when the boy turned three, his parents divorced.

Kate Hudson, as well as Goldie Hawn, follows the concepts of Buddhism eastern religion. The girl observes the spiritual practices and each day spends at least twenty minutes for meditation.

At the end of 2016, there appeared information in the mass media that Kate was in a relationship with Brad Pitt. The younger brother of the actress Oliver also confirmed the gossip. What about the actor and the actress, they haven’t commented on this gossip.

But in the spring, the actress has dispelled the gossips with her next love affair. In May 2017, the actress for the first time appeared in public at the social event with her new beloved - Danny Fujikawa, a musician, and owner of the Lightwave Records studio. The lovers already know each other for 15 years and have just made up their minds to have a close relationship.

In the summer, the couple set off for a journey: the young people wanted to know each other better. At the end of the season, the actress announced their forthcoming wedding. The actress’s children have already liked Danny and expect the wedding ceremony no less than the couple.

In September, Kate Hudson has surprised her admirers and the public having shaved her hair on the head. The actress has decided to do such a thing for the new project, the details of which are still kept in secret.

Her knowledge about the spiritual practices and adherence to the healthy way of life have encouraged the actress to gain her writing experience. In 2016, Kate has shared with her admirers the knowledge she gathered in the sphere of proper nutrition, self-care, and cleansing of the organism. She wrote a book under the title Pretty Happy: Healthy Ways to Love Your Body. The actress has chosen an informal light style of narration, which in combination with the topic has made the book the bestseller among the admirers of the actress.

On the wave of success, Kate Hudson has made up her mind to continue her career, and at the end of October 2017, she published her book about the traditions of the festive events. The actress places the information about her new books on her own Instagram page and also shares her photos with her subscribers.

The new hobby of the actress doesn’t prevent her from continuing to improve her acting skills. In 2016, there were two movies released with the participation of Hudson. Jennifer Aniston and Julia Roberts became her partners on the movie set of the comedy Mother’s Day. Three main heroines are going to fight among themselves for the heart of the single father (Jason Sudeikis).

In September of 2016, there followed the premiere of the movie catastrophe Deepwater Horizon which tells about the accident at the floating oil pumping station, which took place in the Gulf of Mexico in 2010.

In 2017, the actress delighted her fans with her role in the biographical drama Marshall devoted to the formation of the anti-racist movement in the United States in the mid-1950-s. At present, the actress is engaged in the musical Sister, which premiere is set for 2018.

Hudson is a highly demanded actress. She already has contracts for the participation in two new projects - a biographical drama Richard Pryor: Is It Something I Said? and a comedy Born to be King. 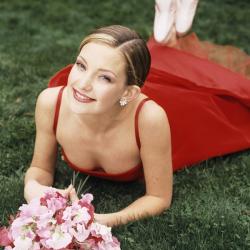