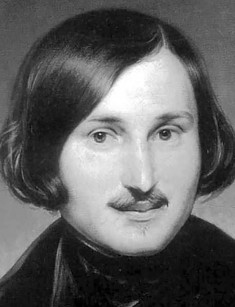 Nikolai Vasilievich Gogol’s life is so extensive and multicolored that historians are still exploring his biography and epistolary materials of the great writer and documentarists are making movies that tell the story of the enigmatic literary genius. For two hundred years, the interest in the playwright has not weakened – not only because of his lyric and epic works but also because Gogol is one of the mysterious figures in the 19-century Russian literature.

Nowadays, it is unknown when Nikolai Vasilievich was born. Some chroniclers believe it was March 20, others are sure it was April 1, 1809.

The master of phantasmagoria spent his childhood in Ukraine, in a picturesque village Sorochyntsi in Poltava Governorate. He was brought up in a large family – there were 5 boys and 6 girls except for him (some of them died in infancy).

The great writer had an interesting bloodline going back to the Cossack noble dynasty of Gogol-Yanovskyi. According to the family legend, the playwright’s grandfather Afanasy Demjanovich Yanovskyi added the second part of his surname to prove he had blood ties to Cossack hetman Ostap Gogol who lived in the 17th century.

The writer’s father Vasily Afanasyevich worked in Little Russia Governorate in the postal administration; in 1805, he resigned as a collegiate assessor. Later, Gogol-Yanovskyi went to his estate Vasylevka (Yanovshchina) and engaged himself in keeping the household. Vasily Afanasyevich was known as a poet, writer, and playwright: he owned his friend Troschinsky’s home theater and also performed as an actor.

For these performances, he wrote comedies based on Ukrainian ballads and legends. However, only one work of Gogol Sr – “The Simpleton, or the Woman’s Deceit Deceived by a Soldier” – was preserved. It was the father who instilled love of the literary art and talent in Nikolai Vasilievich: it is known that Gogol Jr started writing poetry in his childhood. Vasily Afanasyevich died when Nikolai was 15.

According to the contemporaries’ memories, the writer’s mother, Maria Ivanovna, nee Kosyarovskaya, was pretty – she was considered the most beautiful woman in the village. Everybody who was acquainted with her said she was a religious person and paid much attention to her children’s moral education. However, Gogol-Yanovskaya’s education was limited to the Last Judgement prophesies, not Christian rites and prayers.

It is known that Maria married Gogol-Yanovsky at 14. Nikolai Vasilievich was close to his mother and even asked her for a piece of advice concerning his manuscripts. Some authors believe that Gogol’s art is full of fantasy and mysticism due to Maria Ivanovna’s influence.

Nikolai Vasilievich’s childhood and youth were marked with the presence of peasant and pan life; they were filled with the bourgeois features that the playwright described in detail in his works.

When Nikolai was 10, he was sent to Poltava to study at the secondary school; later, the local teacher Gavriila Sorochinskyi taught him. Having received the classical training, the 16-year-old boy became a student of the Highest Sciences Grammar School in the town Nezhino, Chernigov region. The would-be classic of literature had weak health and was never good at studies, although he had an exceptional memory. Sciences were difficult for Nikolai, but he succeeded in Russian Language Arts and Literature.

Some biographers state that his handicapped education was the school’s fault, not the young writer’s. In those years, weak teachers worked in the school – they could not organize the proper educational process. For example, in moral education lessons, knowledge was never transferred through the famous philosophers’ works – corporal punishment was used; the teacher of literature was not in step with the times and preferred the 18-century classics to Pushkin.

During his studies, Gogol was attracted by creativity and gladly took part in theater performances. Among his friends, Gogol was considered a comic and a perky person. The writer communicated with Nikolai Prokopovich, Alexander Danilevskyi, Nestor Kukolnik, and others.

When Gogol was a student, he began to be interested in writing. He admired A.S. Pushkin, although his first works were stylistically different from the great poet’s style and reminded of Bestuzhev-Marlinskyi’s works.

He composed elegies, feuilletons, poems, tried writing prose and works of other genres. During his studies, he wrote the satire “Something about Nezhin, or As the Fool Thinks, So the Bell Clinks” which did not survive to the present days. It is peculiar that his interest in art the young man viewed as a hobby, not the work of his life.

For Gogol, writing was “a ray of light in the realm of darkness” that helped him take his mind off his mental agony. At that time, Nikolai Vasilievich had no clear plans, but he wanted to serve his motherland and be useful for his people, believing its future would be great.

In winter 1828, Gogol went to the cultural capital – St. Petersburg. In the cold, gloomy city, Nikolai Vasilievich was disappointed. He tried to become a civil servant or become a theater employee, but all his attempts failed. Only literature gave him the opportunity to earn money and express himself.

However, writing also brought bad luck – the magazines published only two Gogol’s works, the poem “Italy” and the romantic poem “Hans Kuchelgarten” which was published under a pseudonym V. Alov. The critics perceived “The Idyll in Pictures” negatively and sarcastically. After this defeat, Gogol bought all editions of the poem and burned them in his room. Still, Nikolai Vasilievich did not give up literature after this high-profile failure – the setback gave him the opportunity to change the genre.

In 1830, the reputable magazine “Otechestvennye Zapiski” (“Notes of the Fatherland”) published the mystic novella by Gogol “St. John's Eve.”

Later, the writer met baron Delvig, and his works began to be published in his “Literaturnaya Gazeta” (“Literary Newspaper”) and “Severnye Tsvety” (“North Flowers”).

After this success, Gogol was welcomed in the literary company. He began to communicate with Pushkin and Zhukovsky. Spiced with the mixture of the Ukrainian epos and earthy humor, his works “Evenings on a Farm near Dikanka,” “Christmas Eve,” “A Bewitched Place” impressed the Russian poets.

Alexander Sergeevich is said to have given Nikolai Vasilievich the backhistory for his new works. He helped with the plot ideas of the poem “Dead Souls” (1842”) and comedy “The Government Inspector” (1836). However, P.V. Annenkov believes that Pushkin “gave away his treasure reluctantly.”

As a person interested in the history of Little Russia, Nikolai Vasilievich became the author of the collection “Mirgorod” where several works including “Taras Bulba” were published. In his letters to his mother Maria Ivanovna, Gogol asked her to tell about the ordinary people’s lives.

In 1835, the novella “Viy” about a demonic character of the Russian epos was published. As the story runs, three seminarists lose their way and find a mysterious farm whose hostess is a real witch. The main character Khoma has to face phenomenal creatures, church rites, and the sorceress flying in a coffin.

In 1967, the directors Konstantin Yershov and Georgi Kropachyov created the first Soviet horror movie based on Gogol’s “Viy.” The movie starred Leonid Kuravlyov and Natalya Varley.

In 1841, Gogol wrote his prominent novella “The Overcoat.” In this work, Nikolai Vasilievich told the story of a “small person” Akaky Akakievich Bashmachkin who became so poor that an ordinary item of clothing became his source of joy and inspiration.

Speaking about the personality of the writer, it should be noted that Gogol inherited from his father Vasily Afanasyevich not only the affinity to literature but also the tragic fate – the mental illness and fear of early death that the playwright had since his adolescence. The publicist V.G. Korolenko and doctor Bazhenov wrote about it referring to Gogol’s autobiographical materials and epistolary heritage.

While in the Soviet period, Nikolai Vasilievich’s mental disorders were silenced, a modern cultured reader is interested in such details. Since childhood, Gogol is considered to have been suffering from manic depressive psychosis (bipolar mania): funny, joyful mood of the author could suddenly change into depression, hypochondria, and desperation.

Gogol was bothered by it until his last days. In his letters, he admitted he could hear “gloomy” voices that called him far away. Living in constant fear, Gogol became a religious person and lived ascetically. He loved women, but only at a distance: he used to tell Maria Ivanovna that he would go abroad to some lady.

He corresponded with pretty girls of various social groups (Maria Balabina, Countess Anna Vielgorskaya, and others) and courted them romantically and humbly. The writer did not like to expose his personal life, especially love affairs. It is known that Nikolai Vasilievich had no children. Because the writer was not married, there is a theory he was gay. Other researchers believe that he had never had relationships except platonic ones.

Nikolai Vasilievich’s early death – at the age of 42 – is still disturbing scientists, historians, and biographers. Mysterious legends about Gogol are being created, and the actual reason for his death is the subject of arguments today.

In his last years, Nikolai Vasilievich had a writer’s block connected with Khomyakov’s wife’s early death and the archpriest Matthew Konstantinovsky’s fierce criticism: he believed the writer was not virtuous enough. Dark thoughts overwhelmed the writer’s mind. Since 5 February, he refused to eat; on 10 February, because of “the evil spirit,” he burned his manuscripts, and on 18 February, lentening, he fell ill.

The writer refused medical help and waited for his death. The doctors who had identified bowel inflammation, possible typhoid, and indigestion, finally diagnosed meningitis and prescribed dangerous bloodletting against his will which only worsened his mental and physical condition. On 21 February 1852, in the morning, Nikolai Vasilievich died in count Tolstoy’s mansion in Moscow.

The writer’s works are compulsory at schools and higher education institutes. In honor of Nikolai Vasilievich, postage stamps were created in USSR and other countries. Many streets, a dramatical theater, pedagogical institute, and even a crater on Mercury are named after Gogol.

The master of hyperbola and grotesque’s works are the basis for modern theater performances; works of cinema art are being created as well. For example, in 2017, the Russian audience viewed the premiere of the gothic detective series “Gogol. The Beginning” starring Alexander Petrov and Oleg Menshikov.

The enigmatic playwright’s biography contains many interesting facts – even a whole book would not be enough to describe them all. 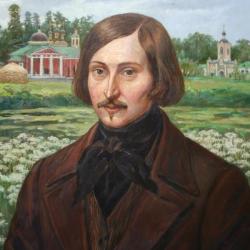