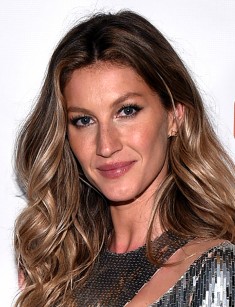 Gisele Bündchen is a world-famous top model, one of the Victoria Secret's angels. She was named the model of the year by the magazine VH1, and also headed the ratings of Forbes.

Gisele Bündchen was born on July 20 in 1980 in Brazil (Orizontina). She was not the only child in the family. Parents of the future model brought up five more daughters, each of whom dreamed of becoming a real model. Giselle has European blood, as her ancestors once moved to Brazil from Germany.

The future model is very fond of her twin sister Patricia, who was born only five minutes later than Giselle and was very similar to her. At school she played volleyball and planned to become a professional sportswoman.

She did not think about the career of a model, though she had a high growth (180 cm) and was very thin. Classmates called her Oli (short for "olive oil").

The way to the top model

The modeling business did not attract Giselle as much as her sisters, but one day she caught her luck by the tail. At 14, the girl went to Sao Paulo with friends. They went to a local fast food restaurant where one of the representatives of the model agency Elite Modeling was sitting. He was interested in Gisele's unusual appearance, and suggested her try herself as a model.

Initially, Bündchen had to refuse. The fact is that her father was against his daughter moving and trying to work as a model. But after a while the girl agreed. She moved to São Paulo. The first agreement with this agency was signed in 1995.

Soon Elite Modeling organized a beauty contest. Giselle took part in it and took the honorable fourth place. At the contest many agents noticed her.

In 1997 the girl decided to move to America. New York opened before her new doors that were previously closed. Giselle diligently studied English. She missed her family very much, but she worked really hard.

The girl soon won in one of the models competitions. Just two years after she moved to America, Vogue magazine called her the Millennium Model. Bündchen appeared four times on the cover of this magazine in 1999.

According to the "Rolling Stone Magazine" the girl was called the most beautiful woman in the world in early 2000s. She took part in many shows, various famous brands. She appeared in commercials, and also regularly appeared on the covers of the most fashionable and popular glossy magazines.

In addition to constant shows and filming Giselle tried herself in cinema. She acted in films twice. The first time it was in 2004. She was offered a role in the remake of the picture "New York Taxi" by Luc Besson.

The second time Bündchen was shot in the film "The Devil Wears Prada". The film was released in 2006. This comedy drama with Anne Hathaway and Meryl Streep was shot by the popular book, and the costs of the wardrobe are recognized as the largest in the world. Bündchen played the role of an assistant of the "Podium" editor.

After that Giselle was offered other roles, but she refused. For example, she could play one of the main roles in the film "Charlie's Angels." But she was more attracted by the work of the model, and she did not need money.

In addition to her favorite job, Giselle tried to help those who really needed it. She was engaged in charity.

Bündchen decided to donate money for jewelry to charity for the first time in 2003. She put her platinum hearts on auction, which she created with the jewelery house "Platinum Guild International".

All money that was received after the sale of jewelry, the model donated to the children's clinic of St. Jude, which is located in Memphis (USA). Also, Bündchen sold several iPods with autographs and donated money to people affected by the hurricane Katrina.

In addition, the model put up for auction Christies two diamond rings (the first 6 carats, and the second 3.5 carats) in 2008. The girl gave all the money to the action "Diamond Empowerment Fund" (the purpose of the action was the creation of educational initiatives for African countries).

Giselle actively helps people in Africa who are sick with AIDS. In addition, she took part in the action "I Am Africa" in 2006. The main goal of the event was to make people pay attention to the problems of the people of these regions. Many celebrities were photographed for this album. Their faces were painted in an African manner.

In the beginning of 2000s, she began to travel frequently to third world countries, including Africa. There she lived and she could see the problems of local residents with her own eyes. The model admitted that now she will always help people. Each year, she donates money to poor children in Africa who cannot get an education.

In 2010, she gave half a million dollars to the people of Haiti (after the terrible earthquake). Every year, a free children's clinic of St. Jude receives money. Grateful employees of the institution pray for Giselle.

The model became UNEP Goodwill Ambassador in 2009. She has her own blog, as well as the website that focuses on the problems of ecology. In addition, she took part in the "Seal the Deal!" action, which was held by the United Nations.

In 2010, the model produced her own environmentally friendly line of cosmetics for the face called "Sejaa Pure Skincare". Giselle herself worked on the creation of these creams.

Nevertheless, the model was repeatedly criticized by the members of the Green Party. In 2002, during the show, members of the PETA organization made a protest during Bündchen show, during which she went to the podium in clothes made of real fur.

The girl was also accused of using "dirty" engines during helicopter training. But at the same time, in public, she advocates the use of only environmentally friendly sources of fuel.

The relationship with Josh Hartnett (actor) were the most loud relations of the model, as well as with the model Scott Barnhill. In addition, Giselle had relations with multi-billionaire Juan-Paulo Diniz, who was 16 years older than her.

At one of the shows, the girl was noticed by a famous film actor Leonardo DiCaprio. He was amazed at her beauty and did everything possible so that she would pay attention to him. They started dating in 2000.

Their relationship lasted 5 long years. During this time, they traveled to Africa together; they were named the most beautiful couple of 2004 according to People magazine. There was an engagement, but in 2005 young people broke up for no reason. After that, the girl had not had serious relationship for two years.

In 2007, Bündchen met the footballer Tom Brady. After two years of relations, they played a wedding. In the same 2009, the couple’s son Benjamin Rein Brady was born. Three years later, their daughter Vivian Lake Brady was born.

Despite the fact that Giselle Bündchen is already 36 years, she is also popular and is one of the most highly paid models in the world. She continues to work: she often appears on the covers of many magazines and goes to the podiums in the most expensive and branded clothes of famous designers.

You should know that:

1. The girl makes photo sessions for different magazines, but she never shows her breast. In addition, she does not defile in too candid dresses, since she does not like to show intimate parts of her body to the public;

2. Over the year, Giselle earns more than $ 42 million. She even got into the Guinness Book of Records, as her fortune reached over $ 170 million;

3. All Giselle's sisters became models, but none of them managed to reach the same heights as their sister;

4. Bündchen is very fond of animals, as well as sweets. She had a dog Vida. Ice cream and sweets do not spoil the figure of the top model. 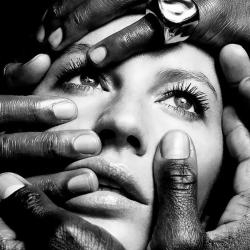