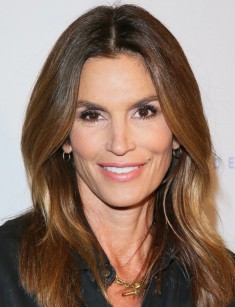 Cindy Crawford is an American supermodel and an actress. Cynthia "Cindy" Ann Crawford was born in February 1966 in DeKalb, in Illinois. The future American supermodel grew up in a low-income family. The father of the soon-to-be celebrity worked as an electrician, and her mother worked as a nurse at the state clinic. Cindy’s ancestry was mostly British, German and French.

Except for Cindy, there were two more daughters in her family – Chris and Danielle. Her parents also had a son Jeffery, but the boy died of leukemia at the age of three. In the future, the girl won't replace a surname just because her father dreamed of the bloodline and preservation of their family name - Crawford.

Cindy and her sisters grew up in the homely, warm and quiet environment. The girls tried to delight their parents. Chris played basketball, which was her father’s favorite game, and Cindy got excellent grades at school. In 1984 the girl graduated from the school and entered the best university of Illinois where she studied Chemical Engineering. Crawford studied so well that the student received the educational grant at Northwestern University.

During this period, the head of her family John Daniel Crawford got seriously ill. Cindy began to earn additionally to help her family. Once during her summer vacation, the girl wanted to make some money for her pocket expenses and collected corn on the farmer grounds and accidentally got on the picture in the newspaper report on the harvest. The famous photographer Victor Skrebneski noticed this photo. The man convinced the 16-year-old beautiful girl to try herself in the model business. Though her parents didn't approve of this idea, for the first time Cindy went against their will and set off for Chicago. After the series of photos by Skrebneski Crawford received the offer to work as a model from Manhattan model agency. Cindy accepted this invitation. So, in 1986 Cindy Crawford began her model career.

In 1986 Cindy Crawford took the 2nd place at Elite Model Look beauty pageant. The model represented the "Elite Model Management" New York agency. The girl with hazel eyes, with the following parameters - 86-66-89, with auburn hair and a remarkable feature – a birthmark over her upper lip – began her quick career ascension. What about her birthmark, at first people around convinced Cindy to remove this pigmentary spot on her skin. The girl didn’t agree, and the photographers removed this "defect" with the help of "Photoshop". At the first glossy shots in "Vogue" and "Cosmopolitan" magazines, Crawford appeared without her distinctive birthmark.

The first months of life in New York turned out to be somewhat difficult for the young girl. She learned to walk on the podium, to do her make-up professionally and to observe a rigorous diet. But Cindy successfully managed to cope with all these tasks quickly, and soon the photos of the model began to appear on the covers of popular tabloids.

In the late eighties and nineties, Crawford becomes a world-famous supermodel. Cindy appears on the podium, presenting the most well-known brands. For ten years, since 1989, Cindy Crawford was the face of Revlon cosmetic brand. The public usually compares Cindy Crawford to the model Gia Carangi because of their similarity in appearance. Gianni Versace and Escada, the well-known Fashion Houses invite the supermodel to become the face of their brands.

Cindy Crawford is the first model who has agreed to appear naked in the photo shoot for "Playboy" magazine. The photographer Herb Ritts took pictures of the model for this edition. According to the tabloid version, the American model took the 5th place in Top 100 most seductive stars of the 20th century. And in 1997 "Shape" magazine recognized the model as the second (after the actress Demi Moore) in the list of the most beautiful women of the world among 4 thousand contestants. "People" magazine also included supermodel into its rates and recognized the American model as one of the 50 most beautiful people on the planet.

Since the end of the eighties and till the middle of nineties Cindy Crawford was a host of "House of Style" program on MTV channel. At the same time, the model appeared in Pepsi commercials. Moreover, the American beauty managed to try her hand at the cinema. Crawford had her debut in the picture "Fair Game" in the role of the attorney. This detective movie about KGB agents with the budget of $50 million turned out to be a failure. Both the audience and critics criticized the film. Cindy tried to take part in the series and feature movies several times more, but they weren't successful. As a result, Crawford returned to her work in the fashion industry.

Soon Cindy achieved commercial success by releasing fitness video lessons. Besides, Cindy has plans to write a book for children. Moreover, she produces the series of "Meaningful Beauty" cosmetic products.

The wealth of Crawford by the assumption of the experts reaches $35 million. In 2002 when Cindy turned 40, she occupied the 26th position of Maxim Hot 100 rate. During her model career, the American model appeared on the covers of more than 600 favorite magazines of the planet.

The actor Richard Gere became the first spouse of Cindy. Their marriage hadn’t lasted for long. Richard spent his time in Tibet, and Cindy stayed alone. Three years later Cindy and Richard divorced. They had no children in this marriage.

In spring of 1998, Cindy Crawford married to the restaurateur Rande Gerber. A year later Cindy gave birth to their son who was called Presley Walker. In 2001 their daughter Kaia Jourdan was born. The girl already tries her hand in model business.

Cindy Crawford dedicated a lot of time to the charity. The woman has her own "Little Star Foundation" charity fund which finances programs for production of medicine for children sick with leukemia. Also, this foundation provides funds for the maintenance of abandoned children.

At present Cindy lives together with her family in Malibu.

In June 2017 Cindy Crawford appeared in the new photoshoot. The supermodel was posing on the beach. The 51-year-old beauty was captured during her walk. The users of Instagram network appreciated slim figure of the model in a white swimsuit. Cindy already published similar pictures in 2016 when she had a vacation on the Bahamas together with her husband.

In February of 2017, the supermodel presented herself on the cover of March "Vogue magazine" edition. The American celebrity appeared on the cover of the Australian version of the cult glossy magazine in the dress from the new collection of Dior Fashion House. In this fashion shooting, Crawford also was posing in the suits of other well-known brands, including Chanel and Valentino.

Crawford often models for "Vogue" edition. At different times the model showed up on the covers of this glossy magazine. Crawford’s joint photoshoot with her daughter Kaia became one of her latest works for "Vogue". In her interview, Cindy has remembered the beginning of her career, told about the secrets of successful work in fashion industry.

At present period, Cindy Crawford still has a lot of plans. The American model continues to develop a complex of exercises for young mothers and women who would like to keep in shape. By the words of the supermodel, the fitness is beneficial after childbirth. According to her, such training lets you get to shape. Cindy told about it in the video under the title "New Measurement". Most experts admit that Crawford’s philosophy of shaping goes against the concept of video lessons and home physical activities, but the model doesn't think so.

The 10-minute morning exercise for the weight loss and the program of training from Cindy Crawford called "The Secret of the Ideal Figure" gained popularity on the web. This program includes lessons with the help of which it ‘s possible to work out the main groups of muscles and to keep them toned. These aerobics and gymnastics is popular in many countries of the world till present days. Her admirers consider that Cindy’s figure and appearance (her growth is 177 cm, her weight is 56 kilos) are the most ideal in the world.

Crawford answers the question about the way to reach perfection:

"I never concentrate on the things which I like in myself. I constantly think about what I need to do. I work on myself every day. I wanted so much to become slim, I worried about my legs, hands and my waist. And now I don't feel like a weak woman. It’s so difficult to be beautiful", – the American model responds. 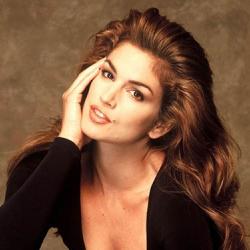