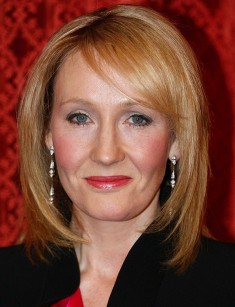 The real name of the most famous British writer J.K. Rowling is Joanne Murray. The author of seven “Harry Potter” novels is also known as Robert Galbraith – this pseudonym is used by the writer in her detectives which are also popular.

Joanne Kate Rowling was born on July 31, 1965, into an ordinary family living in Yate, Great Britain. The girl’s father P.J. Rowling worked in Rolls-Royce company, and the mother J. Anne Rowling was a housekeeper. When Joanna was 2, her sister Diannne was born. In 1969, the family emigrated to Winerbourne.

The future writer’s childhood was genuinely happy. Many photos of the little girl Joanna posted on the Internet confirm this fact. Rowling always smiles as she remembers her childhood: it was full of merry games with her sister, family coziness, warmth, and parents’ care. The mother and father installed in the girl the love of literature.

Many researchers miss the fact concerning the star’s beginning of artwork: Joanne Kate Rowling created her first story at 6, and since that moment, she has not stopped to write.

In 1974, the Rowlings moved to Tutshill, Wales. The change of place became a shock for the 9-year-old child since she loved and valued her school friends.

6 years later, the tragic event happened in the young lady’s life: her mother fell ill. The fast development of the disease –multilocular sclerosis – lead to Rowling’s mother death. Having buried the most important person in her life, in 1990, Joanna decided to leave Tutshill and move to London.

As the young woman got her French linguistics diploma, she was hired as a secretary in the company “Amnesty International.” At this period, Rowling fell in love for the first time. In a year, she and her first boyfriend move to Manchester.

It was on the train from Manchester to London when the writer created the image of the well-known magician boy wearing glasses – Harry Potter.

The beginning of Joanne Rowling’s career is the year when the first part of the series, “Harry Potter and the Philosopher’s Stone,” was published – 1997. The edition was 1000 copies. In November, the book was awarded Nesyle Smarties Book Prize. In 1998, Rowling won her first international prize – the Вritish Book Award – for this book.

After the success and books acknowledgment, the auction was held: the “Philosopher’s Stone” publication rights were the lot. The American publishing house “Scholastic Incorporation” paid $105 thousand and won.

In summer 1998, the sequel of the novel “The Chamber of Secrets” was published; in 2000, the third part “Harry Potter and the Prisoner of Azkaban” was released. The fourth part “Goblet of Fire” broke all selling records: 373 thousand books were sold in 24 hours.

In 2003, Rowling wrote and published the fifth part of the sensational saga “Harry Potter and the Order of the Phoenix.” In 2005, the sixth book “Harry Potter and the Half-Blood Prince” came out and broke the previous selling records: 9 million books were sold in 24 hours. In 2007m the seventh part of the novel about the magician boy – “The Deathly Hallows” – was written and published.

By now, all 7 parts of the fantastic saga have been translated into 70 languages. Besides, the fascinating movies based on Joanne Rowling’s books have been created. Chris Columbus, Alfonso Cuarón, and David Yates were the directors who worked on these movies.

Other books by Rowling

Except for the novels about the young magician from Hogwarts, the writer is known for other books.

“Fantastic Beasts and Where to Find Them” is the only novel published under the pseudonym “Newt Scamander.” This literary masterpiece is the spin-off story about the young magician. The events that took place 65 years before the boy Harry was born are described.

The majority of the money gained from this book (approximately £ 13 million) Joanne Kate Rowling donated to large charitable organizations for children.

The fairy tale “Babbitty Rabbitty and her Cackling Stump” was written in 2007-2009. For this masterpiece of the world’s literature, the writer was awarded the Order of the British Empire by Prince Charles.

The novel “The Casual Vacancy” is the first social drama for adults and teenagers created by Joanne Kate Rowling. In addition, the detective short story “The Cuckoo’s Calling” was much talked about.

When the young Rowling worked in “Amnesty International,” she was looking for a new job. Having read the teacher position ad in “The Guardian,” J.K. Rowling made a decision to go to Portugal.

In the city Porto, Rowling met her first husband, the TV journalist Jorge Arantes. They married in fall 1992, and in July 1993, their daughter Jessica Isabel Rowling Arantes was born.

Despite the difficult relationship with her husband, the writer did her best to save the family. Biographers suggest that Rowling often had to endure scenes of jealousy, domestic violence, and assault. It is confirmed by the writer’s confession that she was beaten by her husband once, and after that, he just threw her out of the house with the daughter.

In December 1993, Rowling with Jessica (and three chapters of “Harry Potter” in her bag) had to move to Edinburgh to her younger sister.

In 1993, Rowling returned to England. As a single mother, she was on the state welfare (£70) that was the only income of the writer. Despite the difficult financial situation, she continued to work hard.

Because of her bitter experience, the writer did not dare to create a new family. She devoted her time to her daughter and books. Only 8 years later, Joanne married again. Her partner is the anesthesiologist Neil Michael Murray who is five years younger than the writer.

In 2001, the couple married, and in 2003, their son David was born. In 2005, another son Mackenzie was born. In her first interview after the labor, J.K. Rowling said she was really happy, and her beloved children and loving husband were the reason for her endless joy.

Today, J.K. Rowling is the top-paid author in the world. The literary heritage is estimated at hundreds of millions of dollars, and the trademark “Harry Potter” is estimated at about $15 million.

In summer 2016, the premiere of the play “Harry Potter and the Cursed Child” took place in London. Despite many rumors and fans’ speculations, this work is not the eighth part of the novel – it is only the scenario of the theater performance. The real authors of the “Cursed Child” were Jack Thorne and John Tiffany.

The work is a new story. The events that take place 19 years later after the “Deathly Hallows” events are pictured.

In September 2016, Rowling’s portal launched the new apps that are the additional collections to the main 7 parts of the fantastic saga about the magician boy. These plots are about some minor characters, the history of the prison Azkaban, and the magic school Hogwarts.

In her interview to “The Guardian,” J.K. Rowling said she was working on two books which would be published under the pseudonym “Robert Galbraith.”

The writer noticed that the new books did not relate to Newt Scamander from “Fantastic Beasts and Where to Find Them” whose screen adaptation was released in fall 2016 in America. 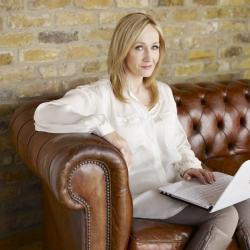