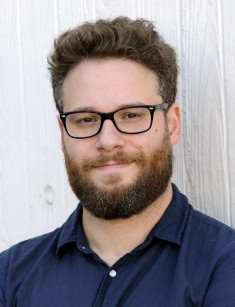 Seth Aaron Rogen is a Canadian movie actor and scriptwriter, who has become famous after taking part in the famous youth TV series Freaks and Geeks. After such success, Seth Rogen has continued to take part in the comedy movies, which brought more and more fame to the actor. At present, the actor's creative career is mainly associated mainly with the humorous genre and entertainment projects.

Seth Rogen was born and spent his childhood in Canada, in the town of Vancouver. His father, Mark Rogen headed the Jewish Workmen’s Circle public organization, and his mother, Sandy Rogen, was working for the social service. Seth’s elder sister, Danya has also followed in the footsteps of her mother.

Rogen attended Vancouver Talmud Torah Elementary School, which taught the children the religious concepts. Later, the teenager began to attend Point Grey Secondary School, but he hasn’t finished his studies. The fact is that at the age of thirteen Seth started to take part in the movies and already at the high school the actor was offered the leading role in the project. That's why at that moment the young man decided that he wouldn't need the school-leaving certificate.

After many children's roles, Seth Rogen has received the invitation to become a protagonist in the American TV series Freaks and Geeks. Because of the role of the fat guy Ken, the actor had to give up studies and relocate to the United States. After this, he got another bright role – again in the TV series – the sitcom under the title Undeclared. It’s noteworthy that in this project has tried himself also as a scriptwriter who has written the script to one of the episodes.

The first non-humorous movie with the participation of Seth Rogen was the thriller The Green Hornet. Later there followed the ironic fighter The Interview, the tragicomedy 50/50 about the cancer patient and the biographical drama Steve Jobs. In the latter movie, he played the role of the close friend of the Apple founder - Steve Wozniak.

Though, the major part of Rogen's works still relates to the entertainment genre and makes the spectators smile. What about the latest bright movies with the actor, it's worth noting at least the film The Guilt Trip where Seth appeared together with Barbra Streisand. In this comedy, the actors performed the roles of the son and the mother, who try to help each other to settle the personal life under the pretext of the new cleanser promotion trip around the country.

Also the high rate picture This Is the End was a remarkable episode in Rogen's career. In this movie, Seth Rogen appeared as a director together with Evan Goldberg. It's worth noting that the actors play themselves in the film. The picture begins with the episode when Seth's friends come to him, and the companions go to the housewarming party of their friend James Franco. When friends go to the supermarket at the end of the earth begins.

The movie demonstrates the reaction of the Hollywood stars to the cataclysms. The celebrities are sure that they will be saved in the first turn. The film mocks at the social vices and such unfair social class division.

The actor played the leading role in the absurd comedy under the title Neighbors. On the warpath, which sequel was released 2016. Seth Rogen performed the character of the young father who moved to the new house.

The scandalous comedy movie The Interview has become the most sensational premiere of that period. Seth Rogen and Evan Goldberg have directed this picture. Seth Rogen and James Franco performed the major roles of the interviewers in this picture. According to the plot, they have achieved the chance to have the conversation with Kim Jong-un and the CIA agents have recruited the men to kill the North Korean leader.

In 2004, Seth Rogen got acquainted and began to have relations with the actress Lauren Miller, the star of the comedy For a Good Time, Call... The girl has written the script for this movie herself. After six years of romantic relation Seth has proposed to Lauren, and in October of 2011, they have celebrated their wedding.

At present, the actor and scriptwriter has settled in Los Angeles. It's comfortable for him to promote his new ideas for movie studios from here. Seth Rogen regularly cooperates with his partner Evan Goldberg. By the way, they have been friends since he has lived in Vancouver.

As family traditions are highly valued and appreciated in the Rogen family, all their relatives often gather together. Though, in recent times, the parents manage to visit their son in the United States more often than he visits them in Canada.

Seth Rogen has a verified account on Instagram, where he has 5 million subscribers. One could expect the bright page with many jokes from the comic actor, but he leads an ordinary daily account where he posts his photos from everyday life without excessive Hollywood gloss and unnatural attempts to amuse the public. However, the actor often makes up some ironic comments to photos. Moreover, he doesn't hesitate to post videos with funny moments of his domestic failures.

In 2017, Seth Rogen took part as a guest actor in the comedy series Friends from College. The series was shown on the Netflix platform. The first season came out in July of 2017, and already in August, Friends from College was prolonged for the second season. According to the plot, the series is a tragicomedy which tells about the problems and adventures of six Harvard graduates in New York.

Seth Rogen has performed the role of Paul Dobkin. The series got controversial reviews, as the critics didn't like the actors' cast for the leading roles, which the press called stuck in the unbearable images, as well as the obvious plot turns. Though, the critics were delighted with the selection of the invited actors – except for Rogen, Ike Barinholtz, Kate McKinnon and Chris Elliott took part in this movie. The representative of TV Guide even stated that they regretted that the TV series Friends from College hadn't been shot with those actors in the leading roles.

In 2017, the actor took part in the full-length movie. Together with James and Dave Franco, Seth Rogen played the roles in the tragicomedy The Disaster Artist. This is a biographical movie which events take place in the 21st century. The movie tells the story of the eccentric director Tommy Wiseau who in 2003 shot the movie The Room which later was called the worst movie and considered to be the benchmark of untalented films.

For 2018, the actor has three movie premieres at once. These are the biographical drama Newsflash with participations Mark Ruffalo and Logan Lerman, the comedy Like Father with Kristen Bell and the tragic comedy Zeroville about a man who tries to get to Hollywood. In the latter movie Dave and James Franco, Megan Fox and Will Ferrell have become the actor's partners on the movie set.

The actor has already planned his work in 2019. The forthcoming year is saturated with the new roles. The premiere of the adventure movie The Lion King is set for July of 2019. This movie is a remake of the same-name world-famous animated series of

1994. In this picture, Rogen will voice-over one of the friends of the leading character - the boar Pumbaa.