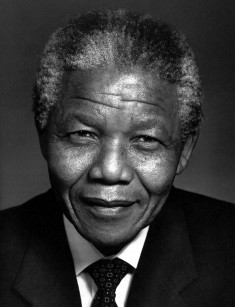 Nelson Mandela was born in the village Mvezo located on the Left Bank of the river Mbashe in South Africa. His father Gadla Henry Mandela at the time of the son’s birth was the head of the village and was a member of the Privy Council of a Thembu tribe. His mother, Nongapi Nosekeni was the third wife of Gadla, who had also 4 wives. Nelson's father also had 3 sons and 9 daughters.

It’s Interesting that at birth the boy was named Rolihlahla, which can be translated as "Naughty Boy". But when he went to school, English teacher traditionally gave all the students English names. The name of Nelson Mandela appeared at school. A few years later, the family moved to another village – Qunu. It happened because of the father’s displacement by the new colonial government.

Gadla Mandela was devastated and died when Nelson was only 9 years old. After elementary school, Nelson Mandela graduated from high boarding school, Clarkebury. Then he studied at the Methodist College in Fort Beaufort. There, Nelson fell in love with sports. Especially, he liked running and boxing.

At the age of 21, he entered the University Of Fort Hare. There were few black residents with a diploma of higher education at the time. But Mandela studied there only for one year. He left the University because of the participation in the student’s boycott, who didn’t like the results of the elections to the student representative Council.

In 1941, Mandela moved to the largest city in South Africa – Johannesburg, where he found a job as a guard at the mine, and a little later he became a junior clerk in one of the law firms. At the same time, Nelson Mandela graduated from South African University and got a bachelor’s degree. Immediately after that, he entered the University of Witwatersrand law school, where he met Joe Slovo and Harry Schwartz, the future Ministers of the country.

The Beginning of a Political Struggle

As a student, Nelson Mandela was fond of politics. He was heavily influenced by radical African ideas. He regularly participated in meetings of black intellectuals of the African National Congress and appeared at rallies and protests, supporting the local population. In 1948, the national party came to power in South Africa and the main strategy for the development of the state was the policy of apartheid.

Nelson Mandela became a chief Secretary and later President of the Youth League of the African National Congress. He organized a Defiance Campaign, and in 1955 convened a Congress of free people. He helped people not only by political disagreement. Mandela created the first law office that provided free services to black residents. He also made a list of principles of the future democratic society of the Republic of South Africa "Charter of freedom", which became the main document for the nonviolent struggle against the apartheid regime.

But in the early 60s, Nelson Mandela created a radical organization "Umkhonto ve Sizwe", which made it possible to organize an armed struggle. Together with the members of the team, they organized explosions of government and military facilities. Later, their fight went into the category of partisan. But in autumn, 1962, Mandela was sentenced to imprisonment for 5 years for organizing strikes and illegal crossing the border. Later, due to additional charges, this sentence was replaced with life imprisonment.

Nelson Mandela was in prison for 27 years. As a political prisoner, he had the worst conditions and had the least number of privileges. For example, he was allowed to write only one letter or make only one call in six months. However, thanks to the support of the remaining free friends, in this period he managed to become a world celebrity.

In the press of most countries slogans like "free Nelson Mandela" were published. Besides this, a dark-skinned fighter for justice managed to graduate from the University of London and get a bachelor’s degree. In 1981, still in prison, he applied for the post of honorary rector of the University but lost the election.

Since the mid-1980s, the government has been trying to find a compromise with Mandela. He was offered freedom in exchange for refusing to fight against apartheid. Nelson refused this offer. It was only in 1989 when Frederic Willem de Klerk became the president and the authorities lifted the ban of the African National Congress. A year later, Nelson Mandela and his supporters were acquitted and released.

Despite the release, Mandela and de Clerck's relations were tense. Receiving a joint Nobel Prize didn't bring them together. It was because Nelson Mandela immediately after his release from prison began a strong fight against the government, which was accompanied by attacks and clashes. In most of these clashes, Mandela accused the government. However, thanks to his efforts in 1994 the first democratic elections in the history of South Africa and the African National Congress were held. Gaining 62% of the votes, Mandela became the first black President of South Africa

For 5 years of his reign, the new President has achieved free health care for children and pregnant women, free compulsory education for children up to 14 years, introduced equality in payments, increased subsidies for rural residents, and introduced the land laws, labor relations, qualifications of employees, on equality in employment and others. Mandela worked on communication facilities, electricity, built hospitals, clinics, and houses.

After his retirement in 1999, Nelson Mandela became an active fighter against AIDS. The South African Republic is still the leader in the number of deaths from this disease in the 20th century.

Nelson Mandela was married three times. Evelyn Makaziwe became his first wife in 1944. In this marriage, their sons Madiba Thembekile and Magkano Lewanika and daughters Pumla Makaziwe and Makaziwe Mandela were born.. The couple broke up in 1958.

Immediately after the divorce, Nelson married Winni Dlamini, who gave birth to two daughters - Zenani and Zindziswa. They divorced officially only in 1994, but actually, they broke up when Mandela was in prison. The last wedding of Nelson Mandela took place in 1998 when he married Graça Machel, a well-known politician. Graça was with him until the last days of her life. Nelson has 17 grandchildren and 14 great-grandchildren.

Nelson Mandela is known for a number of publications, which were popular with people who are interested in politics and social activities. The most famous is the autobiography "Long walk to freedom" and the speech "I am prepared to die". A collection of records and letters "Conversations with myself" and a book "The struggle is my life" are also known.

At the beginning of summer 2013, Nelson was hospitalized due to the resumption of an old pulmonary disease. He stayed in the hospital until mid-September. For a long time, his health was unstable. In November Mandela was connected to the machine of artificial respiration. Nevertheless, despite all efforts of doctors, the former President died on December 5th, 2013 at the age of 95 years.

During 3 days the traffic in the capital of Pretoria was stopped, as Mandela’s funeral was attended by a crowd of thousands of citizens. There was a multi-kilometer queue. The official funeral of Nelson Mandela was held on December 15###sup/sup###, 2013 in the village Qunu where the leader of the South African people grew up. 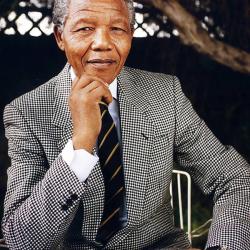