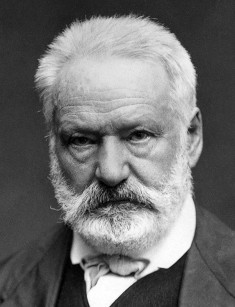 Victor Hugo is a French writer whose books went down in history and became the eternal literary monument. The proponent of gothic and romanticism despised social laws and stood out against the inequality. He created his most famous book, Les Misérables, when he was going through a writer’s block, and the novel became the most favorite piece of art among his fans all over the globe.

In the early 19-century France, the great revolution happened. The old absolute monarchy was replaced by the French First Republic, and the motto “liberty, equality, fraternity” was widespread. Young Napoleon Bonaparte was the promising leader of the better tomorrow.

When the old attitudes were destroyed and the revolution was followed by the period of rising, the third son was born in the family of the French general Joseph Léopold Sigisbert Hugo. The boy was named Victor; he was weak and sickly. As his mother, Sophie Trébuchet, remembered, the baby was no bigger than a table knife.

The wealthy family lived in a large three-floor house. Although Léopold had peasant roots, the French Revolution gave him the chance to show his abilities. The future writer’s father used to be an ordinary officer of the Republican Army, then joined Bonaparte, and became a general. The father had to perform his duties and move frequently. The family used to live in Italy, Spain, Marcelle, and the islands of the Mediterranean Sea and Tuscany. Traveling impressed small Victor; those memories reflected in his later works.

Few facts are known about Sophie Trébuchet’s life. She was the daughter of a ship captain.

Sophie and Léopold tried to raise the three children (Victor, Abel, and Eugène) in love, yet the spouses’ worldviews were different. As a result, they often had conflicts. The Trébuchet family held royalist and Voltairean opinions and supported House of Bourbon. In comparison, the father favored Napoleon. Victor’s parents had not only different views but also personal conflicts: Sophie had an out-of-wedlock affair with a general Victor Lahorie.

Because of the parents’ arguments, the brothers lived with either their mother or father. In 1813, Sophie and Léopold divorced; the woman took the younger son and moved to the capital. Later, she regretted her decision and tried to make amends with her ex-husband, yet the man did not want to forget the past.

The mother’s influence on Victor was profound: she taught the child the Bourbons were devoted to freedom; the boy was reading books and created his own image of a perfect monarch.

Léopold wanted the youngest son to study sciences. The boy was good at math: he could calculate easily and solved complicated problems. He could have made the career of Michel Rolle or René Descartes, yet Victor chose a different way and refused to enter the university.

The future writer preferred Latin poems and books to figures; he devoured great stories of the past. He began to create his own odes and poems in his childhood as a student of the Lycée Louis-le-Grand. Besides, Hugo often created the plays for the school performances: the tables placed together were used as the theater stage, and children cut costumes out of colored paper and cardboard.

When Victor was 14, he was inspired by the first French romantic François-René de Chateaubriand and dreamed of becoming like him. When the teenager was undergoing hospital treatment after a leg injury, he translated Virgil’s texts and used ten exercise books.

Later, the self-critical young man found his manuscripts carefully collected by his mother and burned them: he believed his verse could have been more graceful. In the last exercise book, he wrote that everything was nonsense and drew an egg with a baby bird inside.

15-year-old Victor was a passionate supporter of royalism and literary classicism.

In 1813, Hugo took part in a literary contest and presented the ode “Les Avantages des Tudes” for which he was highly praised. Some jury members could not believe the poet was only 15: Victor reasoned like an adult person with his established worldview.

The young writer glorified the Bourbons. The French authorities appreciated “Ode to the Restoration of the Statue of Henry IV” and paid the talented youth his salary. It was perfect timing for the money: the father refused to support his son materially because Victor had not agreed to enter the school of engineering.

17-year-old Victor and his brother Abel started publishing the magazine Le Conservateur littéraire. In 1822, when his ode was published in a collection, Hugo became a recognized poet in the literary circles.

Hugo’s books pertained to romanticism. One could often see social and political aspects in his texts while Byron’s romanticism put a person in the center of a story.

Although Paris was called the city of love, French people had to see social inequality, dirty nooks, poverty, slavery, women’s loose morals, and other phenomena. As a writer, Hugo noticed details; he was genuinely interested in the environment. In his books, the man did not dig into the reasons for social conflicts – he tried to convince a reader that social problems could be solved only when people learned how to value morality.

The French writer’s books were often politically colored. In his first significant book, The Last Day of a Condemned Man (1829), Hugo metaphorically explains what he thinks about the capital punishment abolition and shows the thoughts and suffering of the character doomed to death.

The book The Man Who Laughs (Initially, Victor was going to title the novel By Order of the King) was written by the mature writer. Hugo describes the horror of the social violence inflicted by the upper class. The main character, Lord Gwynplaine, had his face disfigured in his childhood so that he could not inherit the throne and the high status. Because of his external unattractiveness, people treated the boy as a deficient person without taking into account his positive traits.

The novel Les Misérables created by the writer in 1862 is the peak of his talent. Later, the movie based on the book was released. This story raises burning life issues: starvation and poverty, prostitution among young women who have no other way of earning their slice of bread, and despotism of the authorities.

Jean Valjean, the protagonist, steals a loaf of bread for a starving family. For this minor crime, the man is convicted to 19 years in prison; as long as he is released, he becomes an outcast deprived of the right to live his life peacefully.

Despite the deplorable situation, the character has his aim: to make the homeless girl Cosette happy.

As the French writer’s biographers believe, the book was based on a true story: in 1846, Hugo witnessed a man was arrested because of a stolen piece of bread.

Besides, Victor described the life of the perky orphan Gavroche who died during the 1832 June Rebellion.

In 1828, Hugo formulated the concept of Hunchback of Notre Dame; the book was published in 1831. As the novel came out, Hugo became the pioneer among the French writers who created the work with the historical subtext.

Victor based his book on the experience of the wide-known historian writer Walter Scott. Hunchback of Notre Dame stood out for its political motive: the author was a proponent of cultural monument reconstruction.

For this reason, the Parisian gothic cathedral which the authorities were going to demolish became the main character of his work. The novel had to do with human cruelty and the everlasting confrontation between good and evil. As the dramatic story runs, forlorn, ugly Quasimodo falls in love with the beauty, Esméralda, the only person who did not mock the miserable cathedral servant. After Hugo’s death, the novel was screen-adapted: the famous The Hunchback of Notre Dame (1996) came out.

Victor Hugo’s relationships with women were peculiar. The young writer fell in love with Adèle Foucher, a typical bourgeois woman, and married her in 1822. Five children were born in the family (the first child died in infancy). Gradually, Adèle began to ignore Hugo: she did not consider him to be a talented writer and never wrote a single line from his books. More than that, she cheated on her husband with his friend Sainte-Beuve and did not let her husband touch her: everything Victor did irritated her. However, she preferred to remain silent about cheating.

Later, Hugo fell in love with the courtesan beauty Juliette generously supported by prince Anatoly Demidov. The woman was passionate about the writer as well. Hugo insisted Juliette finish the affair with wealthy Demidov but turned out to be stingy. Victor’s woman who used to dress exquisitely stared wearing ragged clothes: the novelist would give Juliette a small sum of money for her expenses and controlled every object of expenditure.

Victor’s new lover dreamed of becoming an actress, yet the writer took no effort to provide the young woman with a role.

In a while, the man’s passion for aged Juliette cooled. He did not mind having one-night fun with women and even had a separate room in his house for such meetings.

In spring 1885, the writer died of pneumonia. The news about Victor Hugo’s death spread in France momentarily; millions mourned the artist.

The island of Jersey is where Victor Hugo spent three happy years and developed his poet’s talent. Today, the writer’s fans like to visit this place and remember the great man. 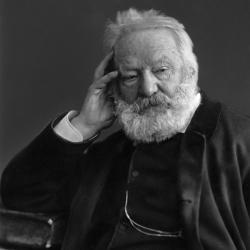