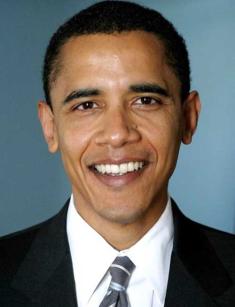 Barack Obama is the most unusual politician in the world, who broke a lot of conventions due to his cold head. He is the 44th president of the United States. Barack Obama became the first t African American president in the history of the USA. During Obama’s presidency his electoral rating has always been at the leading position compared with other presidents of different countries. But it dropped significantly over the past few years. This was due to the fact, that the number of Barack Obama policy supporters has decreased and they didn’t support him in some public and political issues.

Barack Hussein Obama, Jr. was born on August 4, 1961 in sunny Honolulu, Hawaii to a couple of young students, Barack Obama Sr. from Kenya and Stanley Ann Dunham from America. They married against their parents’ wishes few months before the future American president birth. Madeleine Lee Payne Dunham, maternal grandmother of Barack Obama, raised him, while his young parents were getting an education.

In 1964, Obama’s parents divorced and little boy grew up without father's attention and support. In 1967, Barack's mother remarried to an Indonesian Lolo Sutor, and the family moved to Jakarta where Obama's half-sister, Maya Soetoro Ng, was born. In Indonesia the boy went to the local secondary school, but at the end of the fourth grade, Barack was returned to his grandmother in Honolulu. In Hawaii, the future President of the United States got upper secondary education at a prestigious private school "Punahou". At school, Barack was fond of basketball and his team even won the state championship.

Barack Obama describes his childhood and school years in his autobiography "Dreams from My Father". In this book he says that in his youth he drank alcohol, used cocaine and smoked marijuana, but stopped in time and got higher education and achieved significant heights in politics.

After graduating from high school, Barack moved to Los Angeles, where he entered Occidental College, and several months later he transferred to International Relations Faculty of Columbia University in New York. The largest city of the US was the starting point for successful career of the future American president. While studying at the university he worked at the New York Public Interest Research Group and the Business International Corporation.

After receiving a bachelor's degree, Barak decided to increase his knowledge in the field of jurisdiction. In 1988, he moved to Chicago, entered  law school at Harvard University, where he worked as an editor of the university newspaper «Harvard Law Review». He became the first African-American editor in history of the newspaper.

Political career of Barack Obama began in 1997 in Illinois, where he worked as State senator till 2004, representing interests of the US Democratic Party. A key political doctrine of the future US at that time was supporting of low-income families, withdrawal of US troops from Iran, development of pre-school education, tightening control over investigative bodies. The largest support and popularity Obama received due to combating racial discrimination and his support of Health Insurance Systems Development Project

In 2004 Obama run for a seat in the US Senate.  His main opponent, Jack Ryan, withdrew from the race following scandalous accusations. Obama successfully won the primary and won an overwhelming victory over his six opponents.

After winning a seat in the US Senate, Barack Obama became a member of several committees and  dealt with issues related to community service, environmental problems, international relations and veterans affairs. At that time, Obama visited Russia for the first time, where he discussed issues relating to the non-proliferation of weapons of mass destruction.

As a result of his active work as, new US Senator won hearts and minds of mass media. He became one of the most important political figures in Washington. In autumn 2006, no one doubted of his participation in the US presidential elections 2008 and it became obvious that he will become the next President of USA.

These assumptions were proved and in 2007 Obama officially announced his candidacy for President of the United States, and began to prepare his presidential campaign. Basically he focused on political and economic issues, also he expressed his willingness to support deprived social groups, and the overwhelming majority of the US population supported him.

In support of his presidential campaign 58 million dollars were collected, a third of money was donated by ordinary people. Due to this fact the future US president refused public campaign budget and was  ahead of his opponents in the presidential race, using with the slogan «Yes We Can».

Eventually, Barack Obama won the US presidential election and became the first African American politician who took the Oval Office in the White House. He won 51% of the vote and the support was expressed by more than 300 electors.

Barack Obama’s first term was not an easy one. He inherited a global economic recession: the country experienced political instability and the worst financial condition since 30s. However, “The people's president" wasn’t stopped by such difficulties. He plunged into the tasks of his campaign in order to make the country the world’s leader.

During the first term of Obama's presidency he achieved significant results. 787 billion dollars was spent on a series of economic and political reforms. Also he adopted Health care reform, so that by 2014 95% of the US population was provided with health insurance. In addition, US President Barack Obama completed the military mission in Iraq and last US troops left the territory of the Republic of Iraq in 2010.

In 2012 Barack Obama announced his intention to continue to rule the country, announced his candidacy for presidential elections and began his election fund-raising campaign. At that time budget deficit remained the main problem of the USA, but Obama assured voters that the anti-crisis program worked and much remained to be done.

According to the Western media, this time Obama brought in a record amount of nearly $934 million for his presidential campaign. 200 million was spent on his campaign headquarters. Despite the fact that the "enthusiasm" of voters, compared to 2008 significantly faded, Obama won the presidential race and defeated his opponent, Republican Mitt Romney, due to coordinated work of the "electoral machine".

During this period, Obama faced unexpected problems related to health care reform, Syria chemical attack, journalist harassment, tax policy and other actual problems in the country. Then, Obama's approval rating declined steadily. In just half a year of his second term Barack lost more than 12% of his supporters, and in 2014 political course of Barack Obama was not supported by more than half of Americans.

Obama also was involved in the situation in Ukraine. According to the US administration, Russia is trying to infringe upon the sovereignty and territorial integrity of an independent state. Ukraine got the support of the United States and it was prescribed by law and signed by the head of the US in December 2014. According to the bill, the US government will provide Kiev with military support, providing anti-tank and other weapons, unmanned aerial vehicles, anti-artillery radars and other military equipment.

However, according to the US president, his main task is not to supply weapons to Ukraine and to incite war, but to end the bloodshed and to diplomatically settle the conflict.

For this purpose, soon after signing of “The Ukrainian Support Act " Obama passed the law imposing sanctions against Russia, which according to American authorities should influence the policy of Vladimir Putin and to provide additional assistance to Ukraine.

Because of the intensification of the conflict in Donbas, anti-Russian sanctions were strengthened and tightened by the West, but it did not bring the expected result for the United States. Downturn in Russian economy did not affect the change in the political course of the Russian President.

Personal life of Barack Obama is crystal clear. The 44th US President, unlike Presidents from other countries, does not hide his wife Michelle LaVaughn Robinson from public, to whom he is married for over 20 years. Unlike her husband, who has royal roots, Michelle Obama is a descendant of black slaves. However, that did not stop her from becoming the first lady of the United States and performing her duties with dignity, corresponding to her status.

Barack and Michelle Obama met in 1989 in the beginning of the legal career of the future US president. They have experienced, like most young couples, "gray" family routine days, quarrels, lack of money and other typical problems of an average family, which sometimes brought them to divorce.

However, love for each other and care for their daughters helped to save their marriage, and the couple hand in hand overcame all the difficulties. And now they are known as the most perfect couple in a serious world of politics.

In 1998, Michel gave birth to their first daughter Malia Ann, and just three years later, in 2001, Barack Obama became a father for the second time. His wife gave birth to a second daughter, Natasha. The President of the United States is known for his good attitude not only to his daughters, but to all children. He is actively involved in his children’s life, also he is the initiator of various public events for children in the country.

Despite the perfection of the image of Michel and lack of scandalous intrigues in the biography of Barack, according to Western sources close to the White House, now Obama's family is on the verge of divorce.

According to American journalists, for the past several years the relationships between Husband and wife are rather complicated and strained, and there are together just because of their children and Obama's political career. There is information that there was a conflict between Michel and Barack Obama because of the behavior of American President at the mourning ceremony for former South African leader Nelson Mandela. At the ceremony Barack had fun with colleagues and made selfie with the Prime Minister of Denmark Helle Thorning-Schmidt. This fact has no official confirmation and spouses continue to show perfect relationships and mutual love.

Apart from his main activity, the 44th President of the United States is an active user of 16 Internet services and one of the most popular bloggers in the world. Also Obama’s hobbies include writing books. There are two best-selling books in his collection "Dreams from My Father" and "The Audacity of Hope", which are popular all over the world. 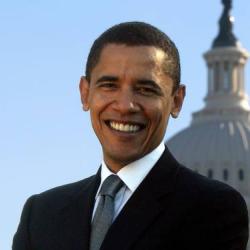