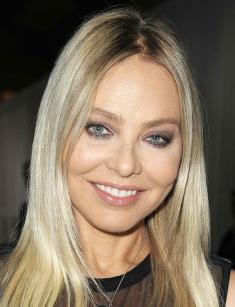 Ornella Muti (real name - Francesca Romana Rivella) was born in the beginning of March 1955 in Rome. Her father was a reporter, and her mother worked as a sculptor. The girl is not the only child in the family : she has a twin sister Claudia. Star of Italian cinema has Russian roots: at that time her maternal grandmother and grandfather moved from Leningrad to Estonia and then to Italy.

When Francesca was only ten years old, her father died. Her mother was left alone with the daughters; the family could hardly make ends meet. Meanwhile, by 13 years the future movie star became an attractive girl and looked much older than she really was. During this period, she kept it secret from her mother, Francesca Romana Rivella began to pose nude in art school.

At the same time young beauty had shootings in men's magazines. Not only connoisseurs of women’s beauty saw racy photos, but also girl’s mother and teachers. The scandal nearly ended her expulsion from the school. But administration gave Francesca the second chance because of plight of her family.

After a while, her older sister, Claudia, who seriously dreamed of becoming a film actress, went to a casting for "The Most Beautiful Wife" by Damiano Damiani and took Francesca with her. Claudia didn’t get the role, but indifferent to the cinema world Francesca was persuaded to star in the title role. It was Damiani who came up with the idea to give her a pseudonym Ornella Muti. It was a necessary step, because at that time there was already a celebrity in the Italian cinema named Rivella.

Notable success came to the actress in 1974, after starring in a comedy "Romanzo Popolare". In the same year another successful film "Appassionato” was released.

The turning point in Muti's career became her acting in “La Derniere femme" (1976). In this film the actress got a deeper role, after which the girl was compared to Sophia Loren and Gina Lollobrigida. Such movies as "La Stanza Del Vescovo" and "I Nuovi Mostri" only strengthened the status of the actress.

World fame came to Ornella Muti after filming in the movie "Il Bisbetico domato" (1980), where she played with Adriano Celentano. This film was especially liked by the audience in the USSR. A year later, actress appeared in the film "Innamorato Pazzo" together with Adriano.

At the beginning of heracting career, Ornella Muti fell in love with a young Italian guy, and after some time he got her pregnant. The father of her child dumped the actress after she refused to have an abortion. Ornella never told his name. It’s knownthat at that time he was married, and his wife was also pregnant.

The actress gave birth to a daughter, Naike, and a year later she agreed to become a wife of Alessio Orano, who was her fellow actor in the first film. They broke up, and Alessio told everyone the truth about Nike, that he was not girl’s father.  It damaged the reputation of the actress.

Second husband of Ornella Muti became Federico Facchinetti, a producer. The actress gave birth to a boy Andrea and a girl Carolina. After a while it turned out that her husband was engaged in financial fraud, writing bad checks in the name of his wife and losing large sums of money in the casino. After uncovering the truth, Muti agreed to pay Federico’s debts in exchange for divorce.

In one of the interviews, the actress said that she had an affair with Adriano, but the relationship ended because the actor was not going to leave his wife.

In 1998, Ornella Muti became a wife of a plastic surgeon Stefano Piccolo. He was 10 years younger than Ornella, but it did not affect their marriage and they were together till 2008.

Today the actress has relationships with a network marketing genius Fabrice Kerhervé.