Benedict Timothy Carlton Cumberbatch is the “trendiest” British actor of the modern theater and cinematography. He won the audience’s love due to his triumphal role in the series “Sherlock” where he revealed his talent to its full. His road to glory was colored with remarkable events and vivid characters that gave him the opportunity to be considered the genius of the movie industry, the magnet that attracted millions of viewers to his charming image.

The fate of the future star was predetermined. Benedict Cumberbatch was born on July 19, 1976, into the family of famous and acknowledged actors of the English theater Wanda Vetham and Timothy Carlton Cumberbatch. The parents provided the boy with the excellent prestigious education at Harrow – the school that many outstanding and globally known persons finished.

Before continuing his education at the university, the young man took the trip around the world to gain life experience. At this time, Cumberbatch learned “the wonders” of people’s lives outside London and even became an English teacher in a Tibetan high-mountain monastery.

Having strengthened his spirit and developed his personality, Benedict Cumberbatch came back home and became the student of the University of Manchester. After graduating, he got the additional education at The London Academy of Music and Dramatic Art.

The actor’s appearance is as unique as his multilayered acting talent. With his height 183 cm, Benedict Cumberbatch has quite an unnatural male look. His curly fair hair, big almond-shaped eyes, oblong head, disarming smile, and royal manners give him the chance to impersonate any character and draw people’s attention anywhere.

Cumberbatch’s professional activity began in 2001 in the biggest British theaters. At that time, the young man played leading characters in classical performances for which he was gaining prestigious awards.

Simultaneously, the theater star tried to play in movies and had several minor roles in insignificant short movies. Besides, the would-be Sherlock was actively taking part in various TV projects where he expressed himself in his best. The ambitious, bright, spectacular, and exuberant actor capable of transforming and getting into his characters achieved the sea of success. He became widely popular not only among the public but also the creators of the world movie masterpieces. Directors held on him to involve him in their movies.

Cumberbatch was not resisting and enjoyed his rapidly growing popularity. Michael Apted’s “Amazing Grace” was his debut on the big screen. It was called the breakthrough of the year, and the movie crew received the prestigious award of the London movie critics.

2010 became the turning point in the actor’s fate – it brought him the role in the series “Sherlock.” That year, Benedict was also auditioning for the role of Doctor in the iconic British fantastic series “Doctor Who” but decided he was not ready to be responsible to the fans of the 50-years-old franchise and joined the new experimental project.

By that moment, the long-term benefits of the “Sherlock” project were ambiguous. This famous detective story has already been screened all over the world and gained considerable popularity. The modern character of the adaptation was also confusing -initially, critics believed it was disrespectful to the original. However, as the practice has shown, Benedict Cumberbatch is the best Sherlock Holmes of the British production in the history of cinematography. He managed to translate the core of Conan Doyle’s character in the image of the genius and sociopath with impeccable manners. Martin Freeman played Doctor Watson; for the actor, the series was also a road-opener to the global glory and Hollywood blockbusters.

The series “Sherlock” is notable for its timing: each episode is like an independent movie, and the gaps between seasons are long. Because of this, during the third season, fans began to worry about the actors’ age that was exerting an effect on them and distancing them from the screen characters.

Later, the Freeman and Cumberbatch duo played in “The Hobbit” based on Tolkien’s book. Normally, directors try to avoid working with the actors of popular tandems so that there would be no comparisons and allusions, but in “The Hobbit,” this rule was not so strict because Benedict was playing the dragon created by means of computer graphics.

Stage partners and movie critics believe that Benedict Cumberbatch is the Wikipedia of acting who can become a unique trainer for beginning actors. Many times, the actor’s Oscar-winning colleagues commented on his exceptional abilities and called him “the alarmingly talented English star.”

Moreover, except for movie awards, according to the popular movie magazine Empire, Cumberbatch became “the sexiest star-2013.” In 2014, the magazine “TIME” included him into the rating “100 most influential people in the world.”

In 2014, Benedict played the main character in the movie “The Imitation Game” where his stage partner was Kira Knightley. The screen adaptation of Alan Turing’s biography is essential for Great Britain because it was the country’s authorities and its laws of those times that were responsible for the scientist’s death.

In 2015, Elizabeth II marked the actor’s work and awarded him with the Order of the British Empire.

That year, the actor played Hamlet. The importance of this event is not only about playing one of the most significant roles in the world’s scenic art – the recording of the performance was later shown in the movies all over the globe.

Today, Benedict has a wide range of roles in movies and theater, although a significant stage in his acting has finished. In 2017, the final (according to the scriptwriters) season of “Sherlock” was out. It had unprecedently low ratings: fans were displeased to see the well-thought detective series with complicated cases and independent episodes turned into the family drama with numerous logical faults and pseudo-romantic moments.

The actor’s distinctive feature is that he is not afraid to play the individuals of different physical types in historical movies and existing franchises – he fits seamlessly so that viewers forget about the portrait resemblance. For instance, Cumberbatch played Van Gogh who looked absolutely different, short and chubby Alan Turing, and Julian Assange with his coarse features. Despite this, critics often imputed that Cumberbatch was actually playing one and the same character. The depressed artist, the gay mathematician, the hacker who fights against the system belong to one and the same type – the aloof genius who does not comprehend other persons and is not willing to become close to them, the same Sherlock who made the actor famous.

Some movies refute these accusations. For example, in the movie “Stuart: A Life Backwards,” Cumberbatch played a modest writer and the main character’s assistant while the role of a rebel was played by Tom Hardy.

However, the actor’s strangest role is an otter. Firstly, it was bloggers who noticed Benedict’s resemblance to these animals, and later, at The Graham Norton Show, the TV presenter asked him to play the animal. With the help of several photos, Cumberbatch portrayed an otter which made that episode truly viral.

In Cumberbatch’s opinion, his personal life is quite old-fashioned. For 12 years, since the moment he was studying, the actor was dating Olvia Poulet, his colleague. After their breakup in 2011, he had short affairs with the Russian model Katia Elizarova and designer Anna Jones, but they could not make their relationships serious.

Later on, the actor was single, and he told journalists about it sincerely. His popularity and being in demand in movies and theater led to the situation that Benedict, similar to many of his characters, found himself married to his work. The star had no wife or children, but he said he would gladly start a family.

At the end of 2013, Benedict and his colleague Sophie Hunter began a whirlwind romance. In November 2014, it was known that the eligible bachelor Benedict Cumberbatch and Sophie Hunter were engaged. Later, it was discovered that Sophie was pregnant.

On February 14th, 2015, Cumberbatch and Hunter married in the St. Peter and St. Paul's Church, Isle of Wight. Less than in 9 months after the marriage, the newlyweds became parents. On June 1st, the couple’s son Christopher Carlton was born. At the end of 2016, the press noticed that Sophie Hunter looked like she was pregnant for the second time.

With his active acting, Cumberbatch’s filmography includes approximately 40 famous movies and series the most fascinating of which are: 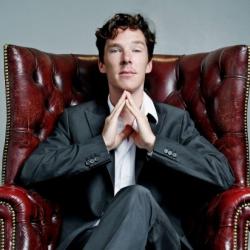