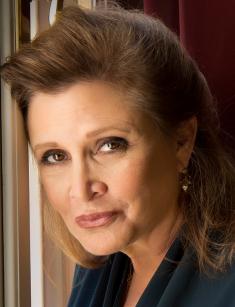 Carrie Fisher was born in a famous Californian city, Beverly Hills. Her father Eddie Fisher was a crooner and her mother Mary Frances was an actress, known as Debbie Reynolds. Carrie has a younger brother Todd. When she was 3 years old, her parents divorced because of the scandal. Her father had an affair with American actress Elizabeth Taylor. He was married several times, and Carrie has two stepsisters Joely and Tricia. All the brothers and sisters became film actors. Debbie Reynolds married to millionaire Harry Karl, who brought up Carrie and her brother.

Since childhood, Kerry wanted to follow in her mother's footsteps and become an actress. When the girl was 12 years old, she was regularly behind the scenes during Debbie’s plays. In order to attend acting classes the girl left high school very early, which she attended in Beverly Hills.

For the first time Fisher played on the stage when she was17 years old. She played in a musical "Irene", starring her mother in a title role. In the same year she became a student of the London Royal Central School of Speech and Drama, but she studied there only one and a half of the course.

Carrie Fisher made her film debut in 1975 in the drama "Shampoo," playing Lorna in an episodic role. But the next role of Princess Leia Organa in the science-fiction film "Star Wars. Episode IV. A new Hope”, made the actress famous. And she starred in two sequels," Star Wars. Episode V. The Empire Strikes Back "and" Star Wars. Episode VI. Return of the Jedi”. Between these episodes, she participated in the musical "The Blues Brothers" and in the romantic comedy "Under the Rainbow".

Then she played central roles in the comedy "Garbo talks", in the horror film "The burbs" and in the musical comedy "When Harry Met Sally." Also she played many small roles: in the comedy "The Man with One Red Shoe," the melodrama "Hannah and Her Sisters”, the criminal action movie " Hollywood vice squad", the fantastic sketch show "Amazon Women on the Moon", the detective "Appointment with Death", the romantic comedy "Lover boy", the comedy "Sibling Rivalry", the youth horror film "Scream 3" and the comedy "Drop Dead Fred".

In a new millennium, she starred in the romantic comedy "Heartbreakers", the youth comedy "Jay and Silent Bob Strike Back", the musical "Undiscovered", the adventure comedy "Fanboys", the horror film "Sorority Row", the melodrama "Stateside" and the thriller "White Lightenin’".

The famous saga "Star Wars: The Force Awakens", in which she again plays Leia Organa, was her last film.

As a writer Carrie Fisher made her debut in 1987. She published an autobiography "Postcards from the Edge", in which she told about difficult relationships with his mother. Three years later, she wrote the novel "Surrender the pink", based on her relationships with her only official husband, Paul Simon.

Another semi-autobiographical novel "Delusions of grandma" was released in 1993, in which she told about pregnant screenwriter Kore Sharpe. In this book there is connection with Carrie’s relationships with the father of her daughter, Lourdes Brian. After nearly 10 years, she released the book "The Hollywood Mom" and the sequel "The best awful there is”. The only non-fiction book, Carrie Fisher wrote, is an autobiography "Wishful drinking".  Now the actress and writer is planning to write a book, based on memoirs of “Star wars” shooting.

Since 1977, Carrie had relationships with the singer and musician Paul Simon for 6 years. Then they broke up, because the actress met Canadian comedian Dan Aykroyd. They were engaged, but soon she broke off the engagement and returned to Simon, to whom she married in 1983. The marriage lasted 11 months.

In 1990, Fisher began dating Brian Lourdes, the Creative Artists Agency agent. In 1992 she gave birth to their daughter Catherine Lourd. But Carrie and Brian were not married and after a while they broke up.

In 2003, the actress had romantic relationships with the singer James Blunt, who was 15 years younger than her. In 2005, Fisher had an affair with a politician from the Republican Party Greg Stevens, who was found dead because of drugs overdose in Fisher’s  villa in Beverly Hills.

In her interviews and on talk shows Carrie Fisher always discussed her problems with drugs and alcohol, which she had in late 70s and early 80s after she became famous. Also several times the actress had drugs overdose, and once she slipped into a short coma. 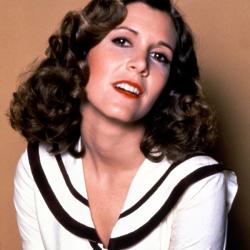